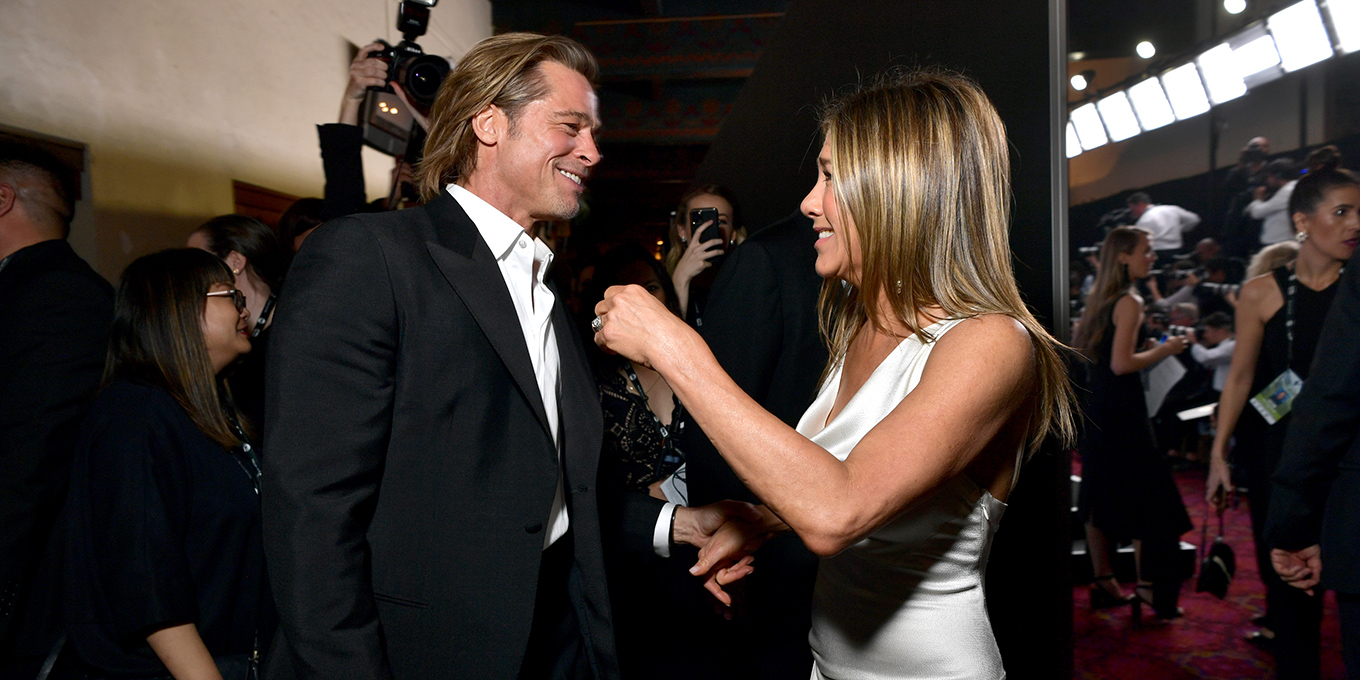 Awards season is in full swing and last night we checked another one off the list: the Screen Actors Guild Awards, held at Los Angeles’ Shrine Auditorium. This season’s TV and film mainstays (e.g. Phoebe Waller-Bridges, Brad Pitt, the cast of Parasite) were of course present for what was probably the most laid-back and succinct show of the bunch. Here’s a recap of what went down.

Canada’s favourite father-son duo, Eugene and Dan Levy, opened the show, giving the infamous “I am an actor” monologue a northern twist with reference to Eugene growing up in Hamilton.

Brad Pitt took home the “Outstanding Performance by a Male Actor in a Supporting Role” award for his performance in Once Upon a Time…in Hollywood. He joked that he should post a photo of himself with the award on his Tinder profile (!!??).

Why don't we ever see Brad Pitt when we're swiping on Tinder?! #sagawards pic.twitter.com/rTkZmhBSZJ

Jennifer Aniston’s performance in The Morning Show won her an Actor for “Outstanding Female Actor in a Drama Series.” She made a point to shout-out Adam Sandler, and he sent love right back via Twitter.

Congrats to the great Jen Aniston for her SAG award and her just being the best. pic.twitter.com/7oWjqaxPe3

In what was likely a fleeting moment, Brad Pitt was photographed holding Jennifer Anniston’s arm and seemingly embracing her backstage after her win. Because it’s 2020, this moment was shared across the Internet where millions of people imbued it with meaning (i.e., a potential rekindling of their romance) that may not have even been there. Aniston told Entertainment Tonight the idea of the duo getting back together was “hysterical.”

Brad and Jen's reunion is literally one of the most iconic moments of 2020 already pic.twitter.com/DhpW9fRVTF

The cast of Parasite received the final award of the night, “Outstanding Performance by a Cast in a Motion Picture” in a satisfying and well-deserved win for the South Korean film (presented by none other than the Levys). This marks the first foreign-language film to receive the award.

Eugene Levy and Dan Levy announcing Parasite’s win is just so gorgeous to me… they did this for me, a schitt’s creek and parasite warrior I just know it pic.twitter.com/cjZ9jNQVWJ

There was no “Proud Dad” award but Bong Joon-ho would win by a long shot.

Outstanding Male Actor in a TV Movie or Limited Series

Jharrel Jerome, When They See Us

Outstanding Female Actor in a TV Movie or Limited Series

Christina Applegate, Dead to Me

Sterling K. Brown, This Is Us

Outstanding Performance by a Male Actor in a Supporting Role

Tom Hanks, A Beautiful Day in the Neighborhood

Winner: Brad Pitt, Once Upon a Time in Hollywood

Outstanding Performance by a Female Actor in a Supporting Role

Outstanding Performance by a Male Actor in a Leading Role

Leonardo DiCaprio, Once Upon a Time in Hollywood

Outstanding Performance by a Female Actor in a Leading Role

Outstanding Performance by a Cast in a Motion Picture

Once Upon a Time in Hollywood