We got all details from the actress about the highly-anticipated movie during TIFF. 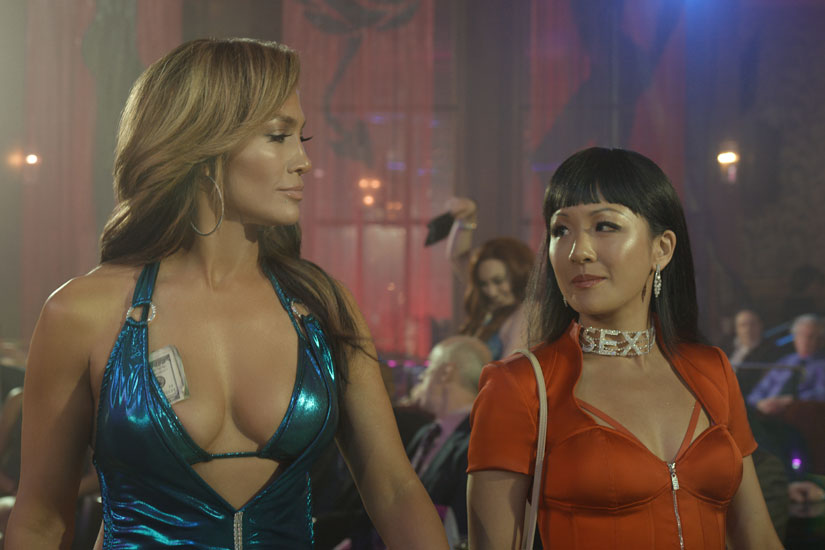 One thing that’s different about filming a movie with an almost all-female cast? “We could talk about tampons without freaking people out,” Hustlers star Constance Wu told us while in town for the Toronto International Film Festival, only half joking. Period talk, of course, isn’t the only pro of working with an all-star group of women (which just so happens to include Cardi B, Keke Palmer, Lili Reinhart and Jennifer Lopez). “We could just be ourselves. And it was so freeing to be that way. The fact that [director] Lorene [Scafaria] hired so many women of different ages, shapes, sizes, backgrounds just made it even better. God, I would love to work with an all-female cast again.”

In Hustlers, which is adapted from a 2015 New York Magazine article, Wu stars as Destiny, a single mom who takes a job stripping in the mid-2000s to support her family. While working, she meets veteran stripper Ramona (Lopez) and, after the 2008 financial crisis, they concoct a scheme to steal money from their rich Wall Street clients. It’s a movie that is funny and thoughtful, and has (justly) been compared to crime-drama Goodfellas. We caught up with Wu for a round-table discussion during TIFF before the movie hits theatres on September 13.

On preparing for Hustlers

“I definitely did do pole training for a really long time, both in classes and private lessons. [Laughs] But for me, what was way more important was the heart of this character. That was my priority, because I didn’t just want this movie to be a glitz and glam movie. I wanted to make sure it had heart, because I think these people have heart. And Hollywood hasn’t traditionally treated women in this occupation with heart. I wasn’t going to do that.”

On approaching her character without judgement

“You approach that in the way you would approach any character, be it a suburban mother on Fresh Off the Boat, or an ingenue in Crazy Rich Asians. Everything that a person says and every quality that a character has is just a clue into their history. So you create a history for a character in order to understand them and you do that through empathy and you do that through imagination. It’s your private work that nobody knows. It’s not even on the page. You just have it in the marrow of your bones. So hopefully when you’re out there, it’s not Constance, it’s somebody else speaking through your body.

On working with JLo

“Working with Jen was great. She’s probably one of the most caring actresses I have have ever worked with. She’s an icon. She can do whatever she wants. But she was always checking to see if I was okay and asking what she could do to make me feel better if I was uncomfortable because she cared. That was just really special and rare. And then we also talked like girlfriends, you know, talking about our ex-boyfriends, what clothes we wanted to wear, whatever.”

On the stigma strippers face

“It’s really difficult. There’s a lot of judgment around it. If you think about what strippers do: they use their bodies for entertainment to make money. That’s the exact same thing a pro athlete does. But we judge and we shame strippers and we don’t judge and shame athletes. It’s a comment on how we view sexuality. It’s this horrible tug-of-war, because you’re supposed to be sexy and then you’re not supposed to be sexy. We could all do better to not judge people’s choices just because they don’t align with ours. That’s why we need stories like this.”

On what she’s learned since becoming a huge star

“I think I’ve learned I’m still figuring it out. And that there’s never one right way to do something, there’s only what’s authentic to you. And [getting there] takes time and patience with yourself, and listening to both your friends and critics.”

“I’m reminded of writer Chimamanda Ngozi Adichie, who talks about the danger of a single story. Because then you check it off and it’s like, ‘Oh, that one story represents everybody.” Now [after Crazy Rich Asians], we have all these Asian-American projects in the pipeline, so that’s great. My hope is that this movie helps spur on content from other female creatives and teams, because people want to see it.

“People always say, ‘Oh, it’s a great time for women right now.’ I think it’s a great time for men. I really do. Because men are finally getting to see the content and the perspectives that they didn’t get to see in media and culture growing up, and that’s only going to grow their empathy and make them a better person. My male director friends are like, ‘It’s hard for me to get a job,’ and I’m like, ‘But look at all this content. You are actually in a very blessed time.’”