5 minutes with...Curious Incident of The Dog In The Nighttime star Joshua Jenkins 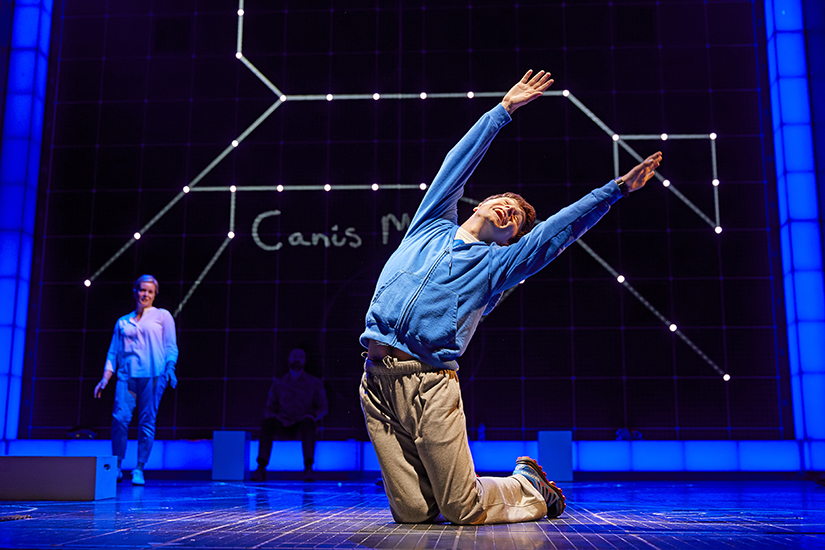 It’s super hard to talk about The Curious Incident of the Dog In the Nighttime (which just made its Canadian debut) without referring to something that happens late in the production’s second act. (But when you’ve seen it, come talk and we’ll squeal about it together). Until then, we can offer you this chat with Joshua Jenkins, the British actor who plays the Tony Award-winning show’s main character, an autistic boy who goes on an unexpectedly hilarious and moving story to investigate, well…a curious incident of a dog in the night time.

Tell us some more about the character you spent two and a half hours every show playing….

His name’s Christopher John Francis Boone, and he’s got the most amazing mind and gift for thinking, but he struggles with everyday social interaction. The shows starts when he finds his neighbour’s dog dead on the front lawn and he goes on this epic coming of age journey to find out who killed his friend Wellington the dog. He’s up against it from the off, because what might be an easy, daily task for us is an enormous challenge for Christopher, and well, you have to come see it to find out what happens.

What sort of preparation did you do for this part?

I thought it best to go to some schools, and meet children on the autistic spectrum. We also met teachers and parents who were incredibly generous and open. The show is also very physical, so what might be a page of dialogue can be a ten minute movement sequence where Christopher is being thrown across the stage, doing flips and literally walking on the walls. There’s an amazing physical theatre company Frantic Assembly who choreographed the show. They made us do a boot camp every morning: sit ups and press ups and running and skipping and boxing. All of the horrendous things that I absolutely hate!

This play, adapted by Simon Stephens, is based on a best-seller by Mark Haddon…

I read it and I fell in love with it like everyone else before the play even existed. He’s a genius. What I loved most about reading the book and then doing the play is Christopher’s relationship with his parents, and how that kept shifting and changing. I still don’t know who’s in the wrong the most or who he gets on best with. That’s the most important part of Curious – it’s family. It’s about the dynamic, and how people treat Christopher and how they deal with it.

The set is like nothing we’ve ever seen before.

It’s amazing! It’s “the magic box”, which is Christopher’s mind so we can project on it what’s going on in his head. When you read the book, you don’t think it’s adaptable because you’re hearing the story through Christopher’s mind, seeing the world through his eyes. Somehow, the creatives behind the show managed to do it and they did it with bells on. If Christopher is feeling anxious or scared or stressed the set is feeling exactly the same way. It’s a bit like cheating for an actor because it’s there to help you. Before this I was doing Shakespeare where you stand there and have a sword and it’s all very structured so this is like nothing I’ve ever done before.

Is there a particular section of the play that’s the biggest hurdle each night for you?
It’s when Christopher is going from Swindon train station to London, and once he gets to his destination in London it all calms down a little bit. But for that 20, 25 minute section it’s chaos. You really do just zoom into his head and you see how chaotic and stressful the whole experience is for him. And for the actor, it’s a bit of a whirlwind of a piece. It looks majestic but it’s a killer. Just before it starts, I go, “Here we go again”. Once you get out of it, you go, “Brilliant! Did it”.

You’re in Toronto for the next few weeks. How do you like it?
I love it! When you travel the world and you go to lots of places very rarely do you come across one of those places where you think, “I could live here and be very happy” and Toronto’s definitely one of those places.

The Curious Incident of the Dog In the Nighttime is on at the Princess of Wales Theatre until November 19. Tickets can be found here.