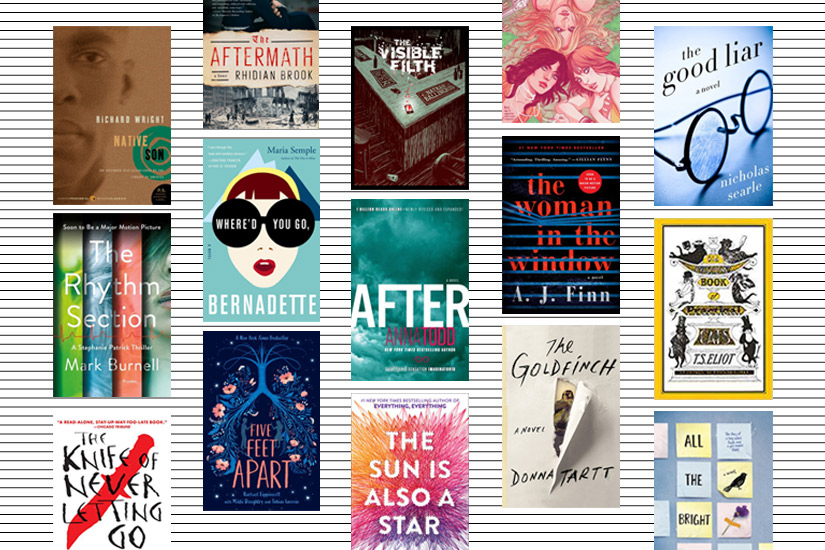 The book is always better…right? Well, there’s only one way to find out. It’s time to hunker down like Hermione and get reading before these books hit the big screen in 2019.

If Beale Street Could Talk star Kiki Layne follows her breakout role with Native Son—an adaptation of Richard Wright’s seminal novel—starring opposite Moonlight’s Ashton Sanders. The story gets modernized for 2019, following Bigger Thomas (Sanders) as he takes a job for a highly influential Chicago family, changing his life forever. It’s the feature-film debut for artist-turned-director Rashid Johnson, making it a highlight at this year’s Sundance fest.

The name’s Lively. Blake Lively. At least, those are the words we imagine the Simple Favor star used to prep for her latest flick, spy thriller The Rhythm Section. Lively is Stephanie Patrick, a woman who discovers that the plane crash that killed her family—a flight she was also supposed to be on—wasn’t an accident. Stephanie seeks revenge by taking on the identity of an assassin to track down those responsible. Jude Law and Sterling K. Brown also star, while Reed Morano (Emmy winner for The Handmaid’s Tale) directs.

Six words: Keira Knightley in a period drama. That’s why we included The Aftermath—about a woman who reunites with her British colonel husband (Jason Clarke) in Germany after WWII and grows closer to a German widower (Alexander Skarsgård) living with them—on our list of movies we can’t wait to see this year, after all.

There are two types of people in this world: those who love Riverdale’s Archie, and those who are firmly #TeamJughead. Five Feet Apart—directed by Jane the Virgin’s Justin Baldoni—is for the latter, as Cole Sprouse stars opposite Haley Lu Richardson (The Edge of Seventeen), two teens who meet in a hospital as they’re being treated for cystic fibrosis. Naturally, they fall in love. Keep Kleenex handy.

Beware of Wounds if you’re easily scared. The psychological thriller, about an affable bartender (Armie Hammer) who begins receiving horrifying messages on a cellphone he finds after a violent brawl, sounds like it’ll be hold-your-breath-too-long intense. Dakota Johnson (Fifty Shades of Grey) and Zazie Beetz (Atlanta) also star.

The Book: After by Anna Todd
Expected Release Date: April 12

Question: Which teen heartthrob inspired the super popular fanfiction that eventually became Anna Todd’s bestselling After series (with the names of any famous people changed, of course)? Answer: Harry Styles. (Really). Alas, the former One Direction member will not be returning to the big screen to play the hyper-fictionalized version of himself named Hardin (Hero Fiennes-Tiffin), a bad boy who begins a, err…rocky relationship with a young woman named Tessa (Josephine Langford).

The Sun Is Also a Star

The Book: The Sun Is Also a Star by Nicola Yoon
Expected Release Date: May 17

After watching romantic drama Everything, Everything (starring Amandla Stenberg and Nick Robinson), based on YA writer Nicola Yoon’s debut novel, we were thrilled to find out her sophomore book was also making its way to the big screen. In The Sun Is Also a Star, Yara Shahidi (Grown-ish) is Natasha, a pragmatic teen who falls in love with Daniel (Riverdale’s Charles Melton)…right before her family is supposed to be deported to Jamaica. Cue all the feelings.

We’ve been eagerly awaiting the big screen version of 2012 bestseller Where’d You Go, Bernadette since it was announced that our winter cover star Cate Blanchett had signed on to play the titular role and Oscar-nominated filmmaker Richard Linklater would be directing. We can’t imagine anyone better to take on role of the agoraphobic architect who disappears suddenly before a family vacation to Antarctica.

Something we weren’t expecting in 2019? Elisabeth Moss, Melissa McCarthy and Tiffany Haddish co-starring in a gangster movie based off…a comic book series? Enter: The Kitchen, in which the three celebs play the wives of Irish mobsters who take over their jailed spouses’ organized crime operation in 1970s Hell’s Kitchen. We need to see this…basically now.

The Woman in the Window

The Book: The Woman in the Window by A.J. Finn
Expected Release Date: October 4

One of 2018’s bestselling novels is getting the movie treatment for 2019. Amy Adams will star in the thriller (helmed by Pride & Prejudice director Joe Wright) as Anna Fox, a reclusive New Yorker who spends most of her time inside, drinking wine watching movies and spying on her neighbours—which is why she sees something awful (vague, we know) happen to her perfect neighbours. Our Oscar senses are tingling.

You’ve already read Donna Tartt’s Pulitzer Prize-winning novel The Goldfinch, yes? You know, the buzzy book being turned into an even buzzier movie starring the likes of Ansel Elgort (Baby Driver), Nicole Kidman and Sarah Paulson? Just in case you haven’t (and it’s about as long as a Game of Thrones book, so we don’t blame you): it’s a coming-of-age story, of sorts, about Theodore (Elgort), who, at 13, survives a bombing at an art museum that kills his mother. From there, he goes through a series of adventures, from living in Las Vegas to eventually becoming involved with art forgeries.

Put Hollywood legends Helen Mirren and Ian McKellen in a movie together, and what could possibly go wrong? Well, when McKellen is playing a career con man who unexpectedly finds himself genuinely caring about his latest mark (Mirren) and not everything about her is as it seems, potentially a lot—for their on-screen personas, that is.

Wondering why the seemingly random pairing of Idris Elba and Taylor Swift presented together at the Golden Globes? Because they’re co-stars in the upcoming film adaptation of Cats (yes, as in the long-running Andrew Lloyd Webber musical). You’ve probably heard of the musical—about a group of cats convening on a single night to decide which of them will come back to a new life—but did you know it was originally based on a book of poems by T.S. Eliot? Director Tom Hooper (Les Misérables) has assembled a star-studded cast for his version of the musical: Judi Dench, James Corden and Jennifer Hudson are among the celebs joining Swift and Elba.

All the Bright Places

The Book: All the Bright Places by Jennifer Niven
Expected Release Date: TBA

After flicks like To All the Boys I’ve Loved Before and Dumplin’, Netflix is staying in the YA adaptation business with All the Bright Places. Elle Fanning and Justice Smith (The Get Down, Jurassic World: The Fallen Kingdom) star as Violet and Finch, two teens who struggle with mental illness. When they meet on the ledge of a bell tower, they team up to explore the world around them.

The Book: How to Build a Girl by Caitlin Moran
Expected Release Date: TBA

We’ve been waiting for breakout Beanie Feldstein’s next big role since her scene-stealing performance in Lady Bird. It finally comes in the form of How to Build a Girl, an adaptation of Caitlin Moran’s semi-autobiographical debut novel. Feldstein stars in the coming-of-age comedy as Johanna, a teen from a working-class family desperate to escape her provincial English town and reinvent herself as a cool-girl rock critic. So…not what we were doing at 16.

It’s not really a new year without a new young adult dystopian adaptation to look forward to, is it? Tom Holland (Spider-Man: Homecoming) and Daisy Ridley (Star Wars) take the mantle for 2019 with sci-fi thriller Chaos Walking. Based off of the first novel of Patrick Ness’ trilogy of the same name, the movie is set on a colony planet where most women have been killed by a virus and all other living creatures can read each other’s minds. Todd (Holland) realizes that Viola (Ridley) is silent—he can’t hear her thoughts—who may be the key to understanding the mysterious phenomenon.