She is 30 years old and still looks marvellous! 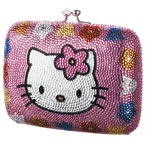 According to her official biography, Kitty White is the daughter of George and Mary White and was born in a suburb of London, England, on November 1, 1974. Little else is known about this most taciturn of pop icons except that she has six long whiskers on her big white head, no mouth, a twin sister Mimmy (who wears a yellow hair bow) and is better known around the world by her shelf name, Hello Kitty.

Unlike fully adorned characters such as Snoopy, Winnie the Pooh or Pikachu, who started out in comic strips, books and video games, Hello Kitty has no other life than her enigmatic 2-D presence, which has appeared on everything from purses and stationery to toasters, cruising bikes, vacuum cleaners and-most recently-a farmer’s wheat field I Yatesbury, England. Created by New York/Paris design group Surface To Air with the help of the UK’s Circlemakers, the 60-metre crop circle of Hello Kitty is, according to Surface To Air’s co-founder, Rajan Mehta, “larger than life, yet mysterious-a little like Kitty herself.”

Aerial photographs of the Kitty crop circle are part of a traveling birthday exhibit in Japan called Kitty Ex., which features Hello Kitty inspired pieces by more than 100 artists, designers and musicians from Japan and around the world. Legendary punk impresario Malcolm McLaren stacked up Kitties into a Hello Kitty totem pole, Sean Lennon did an extreme close-up painting of her entitled Death Row Kitty, and American fashion designer Jeremy Scott produced Hello de Milo, a replica of the famous Venus de Milo statue topped with Kitty’s moon face. Sonic Youth’s Kim Gordon, New York fashion designers As Four and actress Lisa Marie have also contributed catty artwork and music. Kitty Ex. is only one of the many tributes Kitty’s parent company, Sanrio, has organized for her pearl anniversary, which culminates with a birthday bash in L.A. Sanrio has put together an online auction of one-of-a-kind Kitty designer pieces and celebrity sketches, with proceeds going to its partners, UNICEF and Target House, Target’s home for children undergoing long-term treatment at St. Jude Children’s Research Hospital in Memphis, Tenn. Kitty-philes can bid for goodies like a Hello Kitty Airstream trailor, a flouncy Kitty-print Betsey Johnston dress, Steve Madden Kitty stilettos or Kimora Lee Simmons’ Hello Kitty charm bracelet. Those are just some of the elite merchandise that will join the 10,000 new Kitty products that Sanrio rolls out every year, racking up billions of dollars in sales each year.

Image courtesy of Hello KittyInspired by the cats in Lewis Carroll’s Through the Looking Glass, Sanrio designer Yuko Shimizu conjured up Kitty in 1974. Kitty was just one of the legions of characters that Sanrio invented for their stationary and gift items.

Though there was a cast of thousands, Kitty was clearly the star. Everything with the cat on it-sitting sideways in her blue overalls with a crooked bow over her ear-flew off the shelves. By 1976, Hello Kitty had hit America. The ‘70s Hello Kitty craze was a schoolyard phenomenon, fuelled by stickers and coin purses. But when Kitty made her second comeback in the mid-‘90s, piloted by chief designer Yuko Yamaguchi, Hello Kitty had become the cutesy mascot of full-grown women. Celebrities such as Mariah Carey, Cameron Diaz, Lisa Loeb and Christina Aguilera are all Kitty fans.