Putting his past behind him, this rocker releases his third album, Better Days. 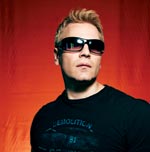 Toronto rock singer Edwin took the high road on his third solo album, Better Days (Linus Entertainment/Universal Music Canada), choosing not to lash out lyrically at his former record label, which he feels dropped the ball on the follow-up to his 1999 platinum-selling debut, Another Spin Around the Sun. “That was probably one of the toughest years of my life,” Edwin says. “I was very disenchanted with the music industry, and then there were some personal problems that all happened at once. It was just overwhelming, and I withdrew for a while.”

When Edwin came out of hiding, he signed a new record deal with Toronto independent label Linus Entertainment and started working on new songs. “I didn’t want this to be a record of me complaining,” he explains. Instead, the handsome front man, who also test-drives 300-plus-horsepower cars on the side, turned inward. “It’s very personal,” he says. “It’s me reminiscing about old friendships, relationships, youthful imagination and dreaming.” The album’s first single, an acoustic-based pop song called “Right Here,” actually takes dreaming too far and isn’t quite as comforting as it sounds. “It’s a basic stalker song,” says Edwin, laughing. “The guy doesn’t feel he’s in the league of the girl he sees all the time. He’s in love with her, but he can’t approach her.”

Visit our forums to chat about your favourite musicians!

Page 1 of 2Other songs deal with profound loss. The cool, percussive rocker “Never Over” is about “a friend who is no longer with us,” says Edwin, and the heavenly piano ballad, “Eyes of a Child,” is “a goodbye to a parent you just lost.”

Edwin even pulled out a song that he wrote shortly after leaving his old group I Mother Earth in 1996: the etheral “Light Reflects,” which he says is still relevant today. “I just sat there, playing guitar and looking out the window, thinking of my life and all the things that I’ve done and experienced and hope to experience.”

Visit our forums to chat about your favourite musicians!