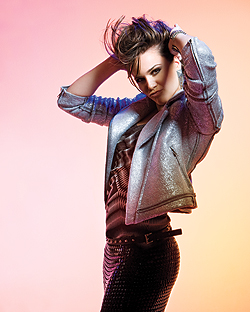 You’d think that after belting out “The Sound of Music” for the 500th time, a person would grow weary of that iconic tune. Yet Elicia MacKenzie, who played Maria in the Toronto production for two years, insists that she’ll miss singing it. That said, the 25-year-old actress from Surrey, B.C., is ready to leave her do-re-mis behind and move into the hair-metal ’80s in Mirvish Productions’ Rock of Ages. Though MacKenzie was born during this flamboyant music period, she didn’t develop a personal affection for the genre until she watched the 1998 film The Wedding Singer. “Harden My Heart,” from one-hit wonder Quarterflash, is a front-runner in MacKenzie’s Rock of Ages fave-tune list, but she says that Journey’s “Don’t Stop Believin’” and Whitesnake’s “Here I Go Again” are contenders. the story arc behind Rock of Ages is the classic tale about a boy who meets, loses and eventually wins back his girl.

Yvan Pedneault, of We Will Rock You fame, plays Drew, the rocker who falls for Sherrie (MacKenzie), a smalltown girl who moves to the Sunset Strip to pursue her acting dreams. “It’s such a relief to play a role that has only been around for a few years,” says MacKenzie. “People don’t have expectations about the character, like they did with Maria.” It’s also a chance for audiences to see MacKenzie shed her squeaky-clean onstage image to portray a disillusioned stripper. “Geez, what have I got myself into here?” she says, laughing. “I know that, after seeing me as Maria, some people are wondering how I’m gonna pull this one off, but I’ll show them! I’m thinking it wouldn’t hurt to take some pole-dancing classes.” She has also swapped her saintly cotton dresses for sequins, studded belts and spandex. “And big, big hair! It’s practically a costume in itself,” she adds. While her character’s innocence is replaced with jaded cynicism, MacKenzie has remained untainted since her win on the 2008 CBC reality series How Do You Solve a Problem Like Maria?, which, in turn, landed her the lead in The Sound of Music. “It’s important not to be naive, but it’s all right to be innocent,” she explains. “Still, you have to know what you want.” And what is that? “Broadway! I’d love to be in Wicked. I’d also love to be the voice of a Disney character some day. I want to do it all!”

Rock of Ages opens in Toronto on April 20.

Watch a video of our shoot with Elicia MacKenzie here.