News to know this Tuesday morning. 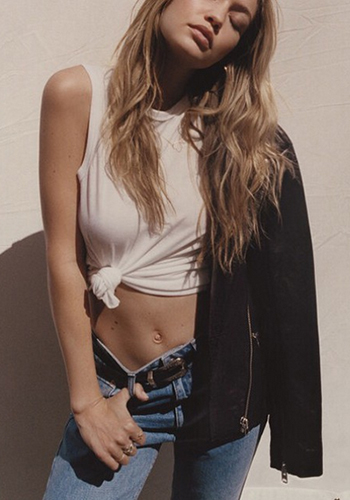 Gigi Hadid x Topshop
Can we officially call it the year of Gigi now? Gigi Hadid has been announced as the face of Topshop’s fall campaign, replacing model-turned-actress Cara Delevingne. It’s another huge win for Hadid, who was also recently featured in Balmain’s latest campaign, alongside her younger sister Bella. Check out all of her top runway moments here.

Aunt Becky and Uncle Jesse are still together
To the delight of ‘90s children everywhere, Uncle Jesse (John Stamos) instagramed a behind-the-scenes snap holding hands with Aunt Becky (Lori Loughlin) beside a script for the Full House spinoff, Fuller House. The show isn’t set to hit Netflix until 2016 (aw, nuts!), but we’ll keep you up to date with any news that emerges in the mean time, dude.

Ice-T and Coco are expecting
After 14 years of marriage, rapper/Law & Order: SVU actor Ice-T and his wife Coco are expecting their first child together. The couple announced the news during the taping of their new talk show, Ice & Coco. Congrats, guys! See our roundup of celebs expecting in 2015, here.

Libras, brace yourselves
Come September, the Libra sign will enter a period of change that could include a big move. Luckily, we’ve rounded up the products you’ll need to bring on your travels (and made note of the ones you can leave behind). Read more horoscopes, here.