ELLE First: Another new hairdo for Kylie, Prince William is up in the air (leaving George in charge at home), and all the breaking news you need to know this morning 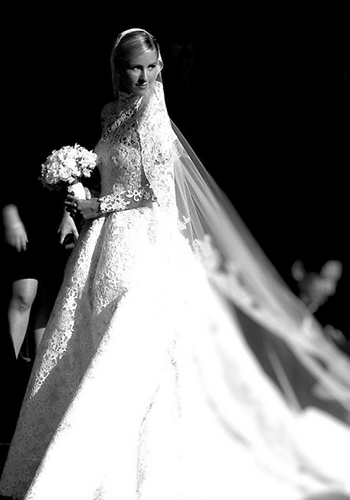 Kylie Jenner changes up her hairdo – again
We can’t keep up with Kylie’s hairstyles. A few days after she debuted Kool-Aid-inspired blue locks, the youngest Jenner switched it up again, showing off cornrows in her natural raven hue.
For more celebrity hair transformations, check out our slideshow.

Nicky Hilton takes a fashion cue from Kate Middleton
She married in the gardens near Prince William and Kate’s London home and it seems hotel heiress Nicky Hilton also took some wedding wardrobe inspo from the duchess, too. Hilton donned a $75,000 custom-Valentino gown for her nuptials to James Rothschild that featured long lace sleeves, A-line skirt and train. In other words, it was worthy of a princess. Read more.

Prince William returns to work Prince George is the man of the house now! Prince William’s paternity leave has come to an end. The royal started his first day of work at the East Anglian Air Ambulance today. In a brief interview, the father of two said he was “hugely excited” about his new gig. He also opened up about parenthood, calling infant daughter Princess Charlotte a “joy of heaven,” and son Prince George a “little monkey.” As for how George is handling being a big brother, we’ve got our own take on the matter. Read more.

Team Canada leads the medal count at the Pan Am Games Rooting for the home team was easy on the first weekend of the Pan Am Games. As of this morning, Team Canada was first in the medal count with 13 a total of 10 golds, eight silvers and six bronzes, including first and second in women’s mountain biking. We chatted with top Canadian athletes such as Joanna Brown before the games began. Read more.

J. Crew expanding budget-friendly line Channelling your inner Jenna Lyons just got a bit more affordable. This month, J. Crew is opening a flagship store for a lower-budget sister line, J. Crew Mercantile, in Dallas, with plans to roll out more boutiques imminently. It will feature some of the same clothes sold in their outlets. Read more.

Will today be productive? If you have an extra-long to-do list today, dear Pisceans, do not despair. If you’re feeling inspired, you’ll accomplish a lot. But how will the rest of the zodiac signs fair with their Mondays? Read more.

READ MORE:
7 questions you need to ask yourself before going for a facial
15 beauty brands with Canadian connections
Adventures in fake tanning