Check out what Ellecanada.com is listening to this month!

Summer may be coming to a close, but we’re not ready to say goodbye just yet. Let’s go on an international holiday to the UK and Australia. Don’t worry; it won’t cost you a thing, except maybe the price of a few downloads. For September’s Elle Music Recommendations we head to England and Australia to discover some of their brightest young female stars. 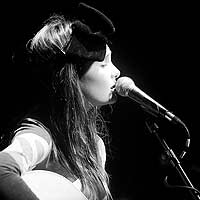 For those who actually pay attention to Bell commercials, you might recognize ‘Coin Laundry’ one of the tracks of off Aussie Lisa Mitchell’s debut album
Wonder.

If you’re an Australian, you definitely know of Mitchell, maybe you’re even a bit sick of her sugary single ‘Nealpolitan Dreams’. But, for everyone in the Northern Hemisphere, you’re in for a sweet treat, I hope you’ve brushed. Proceeded by two EP,
Said One to the Other and
Welcome to the Afternoon, her first full-length
Wonder is a triumphant success mixing folk, punk and harmonious melodies reminiscent of Sinead, well, and Sinead on happy pills. Similar voices but waaaay different attitudes. Perhaps a comparison to Nouvelle Vague’s leading lady Melanie Pain would be a better reference point. However, let it be known that Mitchell is certainly her own brand of female singer/songwriter.

I did, however, have pre-conceived notions about what to expect from this young chanteuse. Why? She was one of the top 12 finalists in Australia’s Pop Idol. Yes, it produces stars but I question their creative lyric writing ability. Well, it’s not really a question, it’s more that I
know they can’t write songs but hey, they can really belt out someone else’s song! Regardless, I was more than pleasantly surprised to hear solidly insightful lyrics from Mitchell. Coupled with her angelic voice, she creates harmonies that can be understated but upon closer inspection, understood.

Check out tracks ‘Neapolitan’, ‘Far Far Away’, ‘See You When you Get Here’ and my fave, ‘A Little Ramblin’ Blues For Any Hour’. It receives the accolade of fave not only because it’s her most rocky tune, but also displays the range of style that Mitchell is capable of, something that sends a bit of a tingle to my toes in anticipation of what’s to come. Stylish, cute and talented Lisa Mitchell is well on her way to international stardom.


Speech Debelle and La Roux on the next page …

She just won the UK’s Barclaycard Mercury Prize for her debut album
Speech Therapy, and it’s not hard to see why. A young sound sprinkled with mature lyrics Speech Dabelle (Corrine Elliot) is making her mark in the UK and it’s just a matter of time until her infectious form of hip hop/jazz sails the seas to North America. Fingers crossed that Debelle doesn’t fall prey to the curse of the Mercury Prize. Much like the Oscar Best Actor/Actress failure affliction, recipients of the Mercury Prize have been known to fall into obscurity. I have a nagging feeling that like the Boston Red Sox once did; she’s going to break this silly curse.

Her unique sound is thanks to Debelle herself as well as Roots Manuva producer Wayne Lotec and Big Dada label founder Will Ashon. Complete with acoustic guitars, pianos and airy joy, this album is an incredibly personal look into the life of a young woman who hasn’t always been at the winning end. Having left home at 19 and spending 4 years bouncing between friends and hostels, Debelle’s lyrics are more than boys, shopping and waking up in Vegas. Wrought with genuine emotion and honesty it’s sometimes difficult to remember that she’s only made one album and is just 25. Her first three singles are ‘Searching’, ‘The Key’ and ‘Go Then, Bye’; all incredibly rapped and written songs in their own rights but I recognize title track ‘Speech Therapy’ as one of the best. Rapped over simple backings of acoustic guitars and strings, Debelle shares a part of her story; her voice appearing to be on the brink of tears the entire 4 minutes and 39 seconds. I guess the best description is the simplest: Speech Debelle is a poet put to music, refreshing, impressive and most definitely lasting.

Think 80’s, I mean really think 80’s. The arrival of La Roux is as nostalgic as jelly shoes legwarmers and the fall of The Berlin Wall. The fashions are coming back with a vengeance so it only makes sense that the music would too, (the wall can stay down thanks). The best part about this 80’s musical revival is that since the decade of hairspray and regrets, we’ve had over 25 years to perfect the production and sound of this predominantly synthesized pop. La Roux takes clear advantage of the production techniques we have today (minus the auto tune thank God!) coupled with singer Eleanor "Elly" Jackson’s gorgeous vocals, and manages to create a blithesome debut album. Similar to the androgynous and stylishly unique musical counterparts Lady Gaga, Little Boots and Ladyhawke, Jackson blazes through 10 catchy and danceable hits, not one track sticking out as skipable. This is a bit of a risky comparison, but dare I say a young Annie Lennox? Ohhhh, yes I dare, how scandalous. You would never know it by her confidence and stage presence but Jackson was relentlessly bullied as a child. I’m no Dr.Phil but these situations can either break or make a person. In the case of Jackson, it seems evident that she took horrible experiences and turned them into somewhat of a ‘look at me now’ story. Not to be overlooked is La Roux partner and producer Ben Langmaid. Along with Michael Norris (Keyboards and computers), William Bowerman (drums) and Mickey O’Brien (Keyboard and backing vocals) La Roux appears to be loved by audiences and the press; comparisons being made to the bands Human League, Heaven 17 and now, Annie Lennox. Much like Lennox, Elly Jackson is creating a flurry of fashion trends across the UK, young women in London oft copying her androgynous and stylish take on 80’s fashion.

I wish I could tell you what my top 3 favorites off the album are, but I simply can’t. They’re all amazing. Whether you cruising in the car, working out or partying, La Roux’s self-titled debut album is one you’ll want in heavy rotation. Oh one last thing, if you’re in Montreal or Toronto this fall, check your local concert listings because La Roux has scheduled stops.

Read more
Girls how are kicking the music charts