Why Drew Barrymore will always be a Hollywood icon

After 30+ years in the biz, Drew Barrymore still has what it takes to succeed. Here, she dishes on beauty, career, love and feminism. 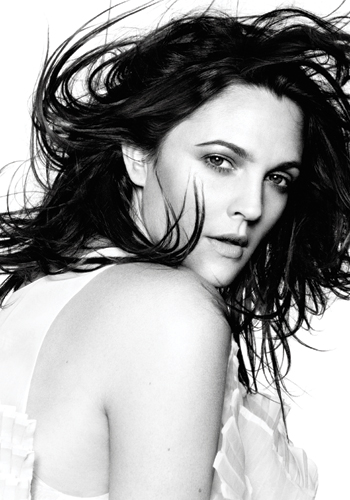 Drew Barrymore sits down at one of her favourite restaurants on Nantucket, flicking the white tablecloth away from her long skirt. The pink walls match her cheeks. There is an embarrassment of roses on the table. It’s feminine and warm and cheerful; for those of us who grew up seemingly alongside Barrymore, it’s just the way you’d expect lunch with the actress to be. She punctuates her excitement by proposing a toast at least three times during lunch, sending sprays of bubbles sailing up out of her flute of champagne.

It’s easy to recall her six-year-old face in
E.T.—that sweetness is still there. At 39, Barrymore is
undeniably powerful. The once vulnerable, lisping child star spent 20 years building a production company called Flower, which has netted revenues in the billions. Now Barrymore has shifted gears again, throwing her creative spirit into a fast-growing line of attainably priced cosmetics, also named Flower. In her spare time, she produces eponymous vintages of Pinot Grigio.

Success is obviously a driving force for Barrymore—in business, as a new mother and in her relationship with her art-consultant husband, Will Kopelman. But the pursuit of perfection has never seemed to concern the free-spirited actress much. “I’m imperfect,” she says with a smile. “I’m not a lifestyle guru, I’m not like ‘
Go do this workout.’ I’m dreading swimsuit season just as much as the next guy.”

As granddaughter to film legend John Barrymore—not to mention goddaughter to Steven Spielberg and godmother to Frances Bean Cobain—Barrymore was born into one of the most hallowed Hollywood families of all time. Yet she prefers “endless exhausting work” to the prospect of comfortably coasting on her family’s legacy. “I’ve been knocked down and humbled very much in my life. That’s why I don’t think things stay without working hard for them,” she explains simply. Barrymore fell into drugs and alcohol when she was a child, went to rehab at 14, got engaged at 16 and later was briefly married to comic Tom Green. But she’s not battling childhood demons anymore. “I’m not the same person I was when I was 16, thank God!” she says. “Everything does change and evolve—I don’t want to fight any of it. I like life so much more every year.”

Now the once self-described hippie speaks about “the rules and finances and functions” of business with an unexpected reverence. Unfairly, perhaps, I had expected the girl who spent much of the ’90s with a daisy tucked behind her ear to be reading a dog-eared copy of
The Secret—not sounding like an excerpt from investor Warren Buffett’s memoir.

When I mention
The Secret, Barrymore bristles. “Oh, God, here I’m going to get in trouble,” she says with a laugh. “Personally, sitting around and wishing does not work for me. Zero things in my life have occurred by dreaming and hoping with fingers crossed and eyes scrunched. It’s totally, like,
working on a weekend when I don’t want to; it’s applying myself endlessly.”

Tina Fey famously said that the rudest thing you can ask a woman is how she balances everything, because no one is asking her husband that. Barrymore, mother of Olive, two, and Frankie, nearly six months, has been raked over the critical coals for answering that very question. “I’ve gotten in massive trouble for saying ‘You can’t have it all.’ People were just furious with me. I feel terrible—can I adjust it to ‘You can’t
do it all?’ Because I can’t. I can’t do everything and have it be done well and feel good about all of it. Everything’s going to get watered down; not everything’s going to get enough power behind it. I don’t want to be at work thinking I’m not spending enough time with my kids; I don’t want to abandon everything I’ve ever done in my life now because I have a family. I just know that my kids are going to come first—they’re going to get the majority of everything—and then what I have left over is going to have to get very streamlined.”

It’s obvious that the controversy shook Barrymore up a bit—after all, she’s “such a celebrator” of women. But the debate didn’t make her hesitant about her choices. “I don’t think prioritizing is a compromise,” she says. “I think it can actually be quite rewarding to one’s life, so you’re not spread so thin and
stressed out and doing everything half-assed. I think it was kind of a blessing to do that.”

In fact, in recent years, Barrymore has forgone her “consuming, 24-7” work of producing, directing and starring in films (despite a recent and not terribly well-received reunion with Adam Sandler for
Blended). Instead, she’s focusing on projects like Flower cosmetics that allow her to
work from home more often—even if that means occasionally bursting into tears during a phone meeting because she’s “knee-deep in a diaper and something just fell in the kitchen.”

I ask what it feels like to be the boss, especially during moments of tumult. “I don’t think of myself as the boss, because that’s an ego thing,” she says, smoothing her denim top. “The ego is such a terrible place to work from in any area of your life—in marriage, in business…. It’s toxic, actually.” Does that mean she shirks the power that comes with running a multi-tiered empire? She flashes her lopsided smile. “I love being a leader—but I never think of myself as the boss. There’s a huge difference,” she says. “I love to passionately, articulately fight for my ideas. I know that I can push my beliefs, even if it’s annoying and staunch.”

Barrymore’s image is about as antagonistic as a golden-retriever pup, but I wonder if she struggles with the rusty stereotype that brands exacting women as bitches. She merely shrugs. “You can’t be sexist-obsessed going into [business] because then you’re constantly going to be compensating in a man’s world, and it just isn’t about that,” she explains. “You want to just be someone who has the confidence to put your ideas out there….Focus on that. Not like, ‘Damn it, I haven’t had this’ or ‘Men get to do this.’ Strip that away. Do you actually have the goods to back up an idea?”

Wisely, she used her five years as a CoverGirl spokesperson to gain insight into the competitive cosmetics industry. Now, a
cream blush sitting on the table (she brought samples of Flower to show me because the line is launching in Canada this month in Walmart) catches her eye. “Motherfucker, this is going to get discontinued!” she says with a sigh. “I’m so upset because women don’t understand this product. It’s the most beautiful dark rose, and it actually creates contour while blushing.” She shakes her head. “It’s so infuriating.”

How does Drew Barrymore feel about raising a family? Find out on the next page…

Barrymore is part of a strong circle of women, including her film-production partner, Nancy Juvonen, who act as her sounding board and have supported her since she was a kid. Her friends’ devotion is well publicized: Cameron Diaz, a more recent addition to the group, cut a radio interview short in July when the host joked about Barrymore’s teenage drug addiction. “They were my family before I got to be in a family. They’re like the
first loves of my life,” says Barrymore, eyes pooling with tears. “Oh, God, I miss my friends so much…. Sleepovers go away, and you only see each other when you can.” Instead, she “works hard at friendships” by planning annual group vacations and, whenever they’re in the same city, rotating dinner parties. “I make a lot of pastas for everybody,” she says, shaking off a wave of emotion with a bright smile. “If I’m just servicing one cauldron, I’m much better than, like, making fish and salad and sides—I can’t do that.”

GALLERY: The best CELEBRITY COUPLES of all time

Though Barrymore is adamant she’s not some lifestyle swami, her voice becomes as soft as velvet when she talks about trying to empower women. “We, as women, are so hard on ourselves,” she says. “I want us to be as good to ourselves as we are to each other or our kids or the people we love.” She is almost pleading, talking past me. “It doesn’t have to do with, like, ‘Take a spa day.’ But in your quietest moments, when nobody is looking and no one can hear you, say something less mean to yourself. Stop comparing yourself to everyone and focusing on what you wish you could change.” She takes a breath and gathers herself, lit by the one golden ray of sunshine streaming through the window. “I don’t want my daughters to see me worry so much as I do. As far as they’re concerned, I’m a dancing idiot and they can’t believe I carry the backpack of so much anxiety. But they’re going to be teenagers eventually.”

Barrymore’s rocky formative years, peppered with career highs and emotional lows, resulted in a distant relationship with her mother. (Her father passed away in 2004.) “It’s a blueprint of what I wouldn’t want to do, unfortunately,” she says. “But it doesn’t feel sad or bad to me. It’s just that I wouldn’t want my kids to be in the public eye; I wouldn’t want them to be raised with a single parent, although I admire my mom for being one. That’s why I waited to have kids. I wanted to know who I was going to be and who I was going to be with.”

After meeting her husband, whose father was the CEO of Chanel for nearly 20 years, she realized they had different upbringings but similar values. (Although her last-minute
pre-vacation packing made him crazy. She now neatly packs the night before and doesn’t hesitate to gloat when she beats him to it.)

MUST-READ: Which HOLLYWOOD COUPLE are you?

“I just want my kids to go to school, you know?” she says. “I’m very traditional, really manner oriented, very schedule driven—totally the opposite of everything I grew up with. But I’m glad I am who I am, and maybe I wouldn’t be as fanatical about those things had I not had such an extreme polarity of that.”

It’s at night in bed, sometimes after watching an episode of
The Colbert Report, that Barrymore allows herself to exhale completely. “When I feel like everybody feels loved and I really got to watch them all day and everybody’s going to bed with a smile on their face—that’s the best feeling in the world. When I’m so tired but I’m just like ‘Everyone’s happy.’” She stops, rubbing her teary eyes and blaming the hormones that come with recent motherhood. “Knowing that tomorrow will never be exactly the same as today—that’s when I’m the happiest.”