The fearless Mia Wasikowska is taking over Hollywood 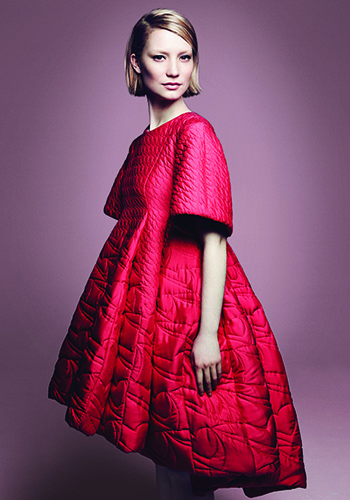 Mia Wasikowska is quietly dunking her Earl Grey tea bag, still a little jet-lagged after her flight to New York from her native Australia. She has one arm folded protectively around her waist in a way that makes her seem as vulnerable as her doe-eyed character in Alice in Wonderland, her 2010 breakout film.

Blonde: The hottest celebrity hair of 2014

Unlike the brooding women Wasikowska has em-bodied on film—a tortured gymnast in In Treatment; Jane Eyre, opposite Michael Fassbender; the insouciant object of affection of real-life boyfriend Jesse Eisenberg in The Double—the actress has a stillness that is often broken by a childlike grin, like the sun peeking through clouds.
The intriguing dichotomy of quiet wit and sudden warmth has helped Wasikowska, 24, carve out a niche as one of Hollywood’s most exciting rising stars. In David Cronenberg’s latest social satire, Maps to the Stars—which premiered to raves at Cannes and is poised to rule at the Toronto International Film Festival this month—Wasikowska plays a scarred pyromaniac who gets a gig as an assistant to an unhinged Hollywood star (Julianne Moore) and befriends a limo driver (Robert Pattinson). At the mention of the film, Wasikowska smiles. “I liked the idea of playing a perky psychopath.”

A perky psychopath is pretty unusual! “I’ve played a lot of characters who were very emotional and troubled, so it was really nice to play someone who was serious but wasn’t, you know, weeping in every scene!”

The movie is pretty critical of the Hollywood scene. How did you feel about that? “I was really interested to see how people responded to it, especially at Cannes, because it is such a commentary on our industry. Some people took it quite personally and were like, ‘Why are you attacking Hollywood?’ But if you [look at] different industries where people are lonely and insecure and ambitious and scared, a lot of the same themes would play out. I don’t think it’s exclusive to Hollywood. It was just a good backdrop for exploring a fucked-up family dynamic.”

What appeals to you about playing characters with imperfections?
“I don’t know anybody who had a straightforward adolescence—going to school, being popular, having a boyfriend—it seems so unrealistic. I think it’s more interesting to study things that aren’t so polished.”

What was your teenage experience like? “I was pretty obsessed with ballet at the time. I expected high school to be social and great, and then I started doing ballet more full-time, so I was away a lot. I never found my social groove.”

Do you feel like you missed out on high school? “I don’t know. Hopefully you own your experience, but I think, ‘I never went to a single school dance.’ Sometimes I wish I’d been more outgoing or more involved. It probably would have been really nice. I probably fed off feeling like an outsider, which isn’t necessarily recommended.” [Laughs]

Why did you give up dance at 15? “I was doing it 30 hours a week—I think it was a combination of being a little burned out and getting my heart broken a little bit by it. I loved the dancing part, but my body wasn’t the right shape and I could see all the faults in my body. That imperfection in my own physicality became frustrating and kind of damaging. So it was good to find something else I loved as much, because there were times when I thought, ‘I can’t imagine doing anything other than dancing.’”

But then you went into film, which some people feel is also a very difficult industry…. “It’s funny. I feel so much less pressure from film than dance. Film is slightly more versatile in the sense that you need actors of all shapes, sizes and races.”

I suppose it also depends on the roles you go after. “Exactly. Someone like Miley Cyrus probably feels so much more awareness of her body and pressure. I don’t know whether that comes from her or the people around her.”

Where did your drive to break into acting come from? “I think all actors experience a certain amount of discomfort within themselves. I’m more comfortable in myself now, but as a teenager, I felt so much more secure in somebody else’s clothes than I did in my own. I got the chance to express all these emotions that other-wise were very difficult to express, like anger and rage and sadness.”

Both your parents are photographers. Did that inform your love of film? “My mom is a film buff, so she always had films playing in the house. They were great in terms of educating me in art and culture. I remember when I first mentioned I was interested in being part of films, my mom hired out a whole lot of Australian films to educate me on what the industry in my own country was like.”

You must have had your picture taken a lot when you were a child. “My mom took a bunch of series that centred on us as kids. They’re wonderful. She emigrated from Poland when she was a teenager, and then, 24 years later, she got a grant to go back, so we lived in Poland for a year. It was at the time when my sister was the same age my mom had been when she left Poland, so my mom was really interested in seeing how my sister responded to being in another country, being totally misplaced.”

You must have recently gotten used to feeling displaced and living in hotels. “For a couple of years, between films I would be back in my childhood room at my parents’ house in Canberra in Australia.”

That must have been odd. “It was really strange. A year ago, I got an apartment. I didn’t originally think I’d live near the sea, but I’m near one of the beaches in Sydney. It feels incredible to be able to go and dump my bags somewhere—to feel grounded. I feel like I’ll always live there. With acting, everything is so inconsistent that it’s incredible to have one thing that I’m very sure about.”

Being in L.A. brings with it a very different lifestyle—and paparazzi. Is that something you’ve dealt with? “When Alice in Wonderland first came out, they were at the airports and stuff, but I think they just figured I’m pretty boring and left me alone. [Laughs] When I promote a big enough movie, they kind of show up to see if I’m going to stumble out of the cab or flash my underpants, and then they leave again. I think they always want to test the new young actresses….”

Speaking of women on the brink, you’re starring in an upcoming (and much-buzzed-about) adaptation of Madame Bovary. How do you feel about the character? “She’s very polarizing. Some people think she’s victimized by her situation, and other people think she’s just a spoiled brat. I love her! She represents all the things that we dis in everyday life. She’s jealous and angry and materialistic in a way that she doesn’t really understand. I feel like we all have varying degrees of materialism when we’re trying to fill a void, you know?”

Best celebrity hair of all time

As your film career continues to pick up speed, how do you keep a balance? “It’s really important to disconnect your self-esteem from your work so that you don’t attach how you feel about yourself to how the industry feels about you. That just ends up becoming like an emotional roller-coaster ride.”

How do you do that? [Laughs] “I don’t know. It’s hard. I’m still learning how to find a balance between my film life and my home life because I don’t want to feel like I have two lives.”

Was there a moment when you realized you are an adult? “Do we ever feel like adults?”

18 of the prettiest celebrity hairdos

I’m not sure that I do. “I know. I still feel very much like a child half of the time, but I’m more grown-up if you measure it by feeling more confident and comfortable. I feel in control, as opposed to other people having the power of making me feel good or bad. Maybe that’s the best way to feel like you’ve grown up.”

Is there something you know now that you wish you could go back and tell yourself at 15? “I would just tell myself to be nicer to myself. I think everybody could probably do with being nicer to their younger selves. Adolescence is a profoundly lonely time for most people.”

Do you read profiles of yourself? “When Alice came out, I did. I found it so heartbreaking that I just decided it was best not to. At the time, I thought you had one shot at being perceived in a certain way and that I had blown it. It was such a huge amount of exposure in a really quick time, and that was overwhelming. I got one really bad review for Alice in Wonderland and it was like, ‘She looks like a heroin addict.’”

What are you looking forward to? “Time off, actually! When I was younger, it was more about getting to the next project really quickly, and now I value the simpler things a lot more. Just being at home and having a cup of tea in the morning is, like, my favourite thing. I don’t feel such an urgency to be achieving or doing things—which is good because otherwise you just end up exhausting yourself.”

Do you have a plan? “I just want to be happy and have a good life. [Laughs] I don’t really have a plan.”