A new album, a hot romance and a fresh approach to life -- She's livin' strong. 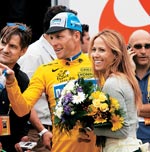 Is Sheryl Crow your favourite Canadian singer, or does someone else top your list? Discuss in our forums.

To enter London’s swank boutique hotel St Martins Lane, you first have to walk through a Day-Glo-lit revolving door. In the lobby, there’s an array of tree stumps enmeshed with life-size chess pieces, as well as bordello furniture draped with pashmina shawls. Thrown into the mix are some quirky Philippe Starck-designed gnome stools. By the time I enter the “beam me up” purple elevator, I’m wondering why Sheryl Crow — the gal from Kennett, Mo. — chose this place to launch her new CD, Wildflower.

Once I’m inside penthouse No. 26, the design shifts to modern chic. Sitting on a sofa, wearing a pair of faded Joe’s Jeans and a charcoal-grey halter top, Crow looks relaxed and tanned. She senses my surprise at the location the music company has chosen for the launch interviews. “I stayed in this hotel for about six hours once, before I checked out. It is the only time I’ve checked out of a hotel,” she says, smiling. “I prefer more homey places-I always gravitate to old architecture.” She adds that she also prefers to spend as much time as she can with her parents, two sisters and brother. “I love my family,” she coos. “We’re just nuts!”

For the last year and a half, the 43-year-old singer-songwriter has been away from them, spending most of her time in Europe working on her new album and supporting her beau, cyclist Lance Armstrong. She thought she’d get a break from the media attention, but instead their relationship became tabloid news. There were false rumours of breakups, as well as speculation that Crow was pregnant or visiting a fertility clinic. “It’s so weird,” she says, laughing. “As soon as you say ‘Okay, I’m going to drop out of sight,’ it just seems like all this other stuff starts coming out.”

The singer and the Tour de France legend met at the Glam Slam for Children event in Las Vegas in October 2003 and began flirting on their BlackBerrys for the first month. They went public once Armstrong’s divorce was final, and have been together ever since, spending their time in Spain and France.

Pre-Armstrong, Crow had flown quietly under the “who’s-with-whom” radar whilst dating the likes of Kid Rock and Owen Wilson, and while she still remains guarded about her private life, Crow has no problem discussing how Armstrong has changed her life.

“I learned that it’s a really great thing to be able to support somebody else,” she says. “It showed me a part of myself that I’ve never seen before, where it’s okay to not be the brightest light shining in the constellation.” She may have been busy keeping a low profile in Europe, but who can forget the Roberto Cavalli-I Dream of Jeannie style that she sported at this year’s Grammy Awards? “I just liked it and I felt like doing something that felt kind of rock,” she says, laughing.

Gazing down at Crow’s hands, you can’t help but notice the stunning diamond ring and gold band nestled together on her right hand. “It’s a hpresent to myself,” she says simply. I then ask to get a look at her most prized instrument — her guitar-callused fingers. “They’re good now because I haven’t played in a while! My fingernails are too long. I’ve always been in awe of Dolly Parton, that she could play with long nails.” Crow then touches the yellow LiveStrong bracelet on her wrist, saying she never takes it off.

Photo courtesy of Keystone Press“Lance inspires me in so many ways,” she says. “It’s great to be with somebody who wants the same things I want. We are a lot alike and we are just extremely grateful for the position that we are in. He’s a lot of fun, and he’s such an inspiring person by virtue of what he has been through. I think more than anything Lance’s attitude about getting up every day with a clean slate has been the thing that affected me most.”

Crow says she keeps in shape by cycling with Armstrong as well as swimming and jogging outdoors. She laughs after admitting how competitive they can be with one another. “Oh my God, we are sooo terrible. We’ll just come to blows over tennis!”

Holding court in the music business, however, seems to have been tailor-made for this Southern girl, who started writing songs at age 13. Since her early days of singing backup for Don Henley and Michael Jackson, Crow’s star has risen. She has made five studio albums and picked up nine Grammys in the process for hits like All I Wanna Do and If It Makes You Happy.

Her latest album, Wildflower (Universal), was a real labour of love. “It’s the first time I’ve made a record where I feel like it’s complete from top to bottom,” says Crow. For the first time in her career, she started with the music before putting pen to paper. She then used her vocals in unique ways, creating a lush and delicate sound. You may not even recognize her baby doll swagger on the track Wildflower, and you will be even more surprised at how soulful she sounds on Always on Your Side, a track she says was inspired by Stevie Wonder and Elton John.

Crow’s favourite work on the album is the song Wildflower, which she says was inspired solely by the innocence of Armstrong’s three young children. “At the heart of it, we are still capable of looking at things in a wide-eyed and naive way, as opposed to being cynical and jaded. Kids just live that way until they start ‘unlearning.’ If you look around, among so much chaos, there’s still so much beauty, so this song is sort of a note to self.”

While she’d like to have her own family, she says the opportunity hasn’t presented itself. “I don’t want to do it under the guise of just getting pregnant. I would like to be married.” For now, Crow is setting her sights on aging gracefully in an industry that celebrates youth. “Bette Davis said aging is not for sissies, but it’s part of the process, and I’d rather go with it and be graceful about it than try to fight it. As you get older, you get to a point where you start removing things from your life that caused you to be distracted all the time. At this point, I’m more interested in being settled and feeling peaceful.”