What should Will and Kate name their second child? We offer (ever so humbly) our predictions and suggestions. 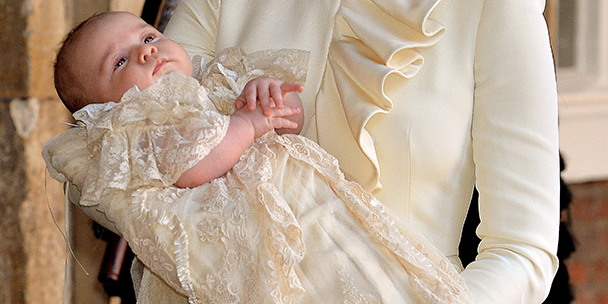 With the big day almost upon us, we’ve no doubt Will and Kate are in an absolute tizz about what to name their second child (that or they’re just letting George name her, in which case, we can’t wait to meet Princess Unicorn Thomas and the Tank Engine). And because we know they’ve been dying for our input (the Queen has been SOS texting us for weeks now), we present the ELLE Canada team’s baby name predictions (what we likely think it will be) and our suggestions (what we’d actually like it to be). Also: You may be able to tell that we think the whole “it’s a girl” thing is a foregone conclusion.

Noreen Flanagan, editor-in-chief: Once it was “confirmed” that Kate had recently ordered Annie Sloan blush-pink paint samples, that pretty much “confirmed” for me that the next little royal tot will be wearing a tiara.
Predicted name: Elizabeth Carole. (Nod to the Queen and Kate’s mom Carole)
Suggested name: Diangela — A hybrid of Diana and a nod to the middle name of the Queen’s mom, which was Angela. It has a certain modish street-style cred. No?

Katherine Flemming, health and beauty editor
Predicted name: Alice. It’s fresh but classic, not weird enough to judgy sneers from Queen E. And certainly not as creepy as Diana, which I cannot and WILL not wrap my head around if it happens. Alice and George? They sound like siblings; it’s so important that it works with the first kid’s name.
Recommended name: Maeve! It’s a name I’ve always loved, but won’t be able to use since I’m having a baby boy (as far as I can tell, anyway). But its turn of the century old-lady vibe fits nicely with George too.

READ MORE: 6 signs Kate Middleton is having a girl

Charlotte Herrold, associate fashion editor
Predicted name: Mary Diana. I don’t think Will and Kate are bold enough to outright name their daughter after the late Princess of Wales, but will likely pay tribute with her middle name preceded by a traditional monarchal name like Mary, which goes back all the way to the House of Stuart.
Recommended name: Diana. Straight up.

Sarah Thompson, content producer
Predicted name: “My money is on Alexandra. In full, it’s super traditional. BUT – the short form Alex is totally modern, just like Kate.”
Recommended name: “Sarah with an “h” obviously. If that doesn’t suit the Duchess, Amelia Mignonette Thermopolis Renaldi will also do.”

Victoria DiPlacido, someone who once stayed up until 5am to watch the royal wedding, so feels Kate owes her something. Also assistant beauty editor. Predicted name: Victoria. Because it is a beautiful, classic, wondrous name steeped in British history. (I will admit no bias whatsoever).
Recommended name: Navy. To show Bey-Jay that they’re not the only ones who can co-opt a colour to name their offspring.

READ MORE: The cutest pics of Kate and Prince George

Ava Baccari, assistant style editor
Predicted name: Alexander. As in, Alexander the Great. May as well give second-born male an important-sounding namesake.
Recommended: Sebastian. Regal, plus everyone loves a timeless Disney reference.

Sarah Laing, associate features editor
Predicted name: Margaret Elizabeth. A nice nod to history (Liz’s beloved baby sis, Elizabeth is also Mama Mid’s middle name) and you bet they know how much the tabloids would love “Princess Maggie”. Or how good would Arthur be for a boy?
Recommended name: How about a nod back to a strong English female from times past? Boudicca, Jane (as in Austen), or Madonna (during her Guy Ritchie phase) would all do nicely.