Why despite the massive success of Orange Is The New Black, she’ll never move to LA. 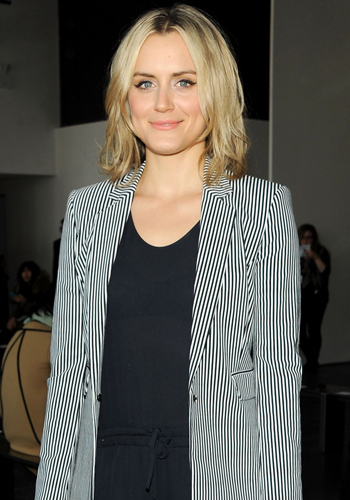 Actress Taylor Schilling is best known for her role as Piper on Netflix’s prison drama
Orange Is The New Black, but her latest film
Stay lit up the
Toronto International Film Festival—and is hitting theatres today. Alongside Aidan Quinn, Schilling plays a newly pregnant women who grapples with how her life will turn out.

“I was really drawn to the idea of being in your mid-twenties and having time to make peace with your past before you can move on. I just turned 29 and I feel like I can see the other end of the tunnel, because my 20s were very tricky, you know?

“There’s a lot of ‘Who am I and how do I fit in the world?’ and ‘What does my past mean and what does the world expect from me?’”

How have you answered those questions?

“I think that it’s just a daily process of practicing being yourself. It takes practice. For my work, it’s so important that I keep plumbing the part that’s more vulnerable and scary to share with the world.

“It is, and I think that that’s like the stuff of life. That’s the ride.”

With the success of Orange Is The New Black, has this past year been a total whirlwind for you?

“It’s been so thrilling. It’s been amazing.”

Why choose acting in the first place?

“There was never like anything else for me to do. I did a play when I was 11 years-old that my mother really encouraged me to audition for because everybody got into it—and I wasn’t particularly good in sports. And I loved it so much. It’s so weird—the
stars just lined up. I knew that that’s what I was going to do. I feel very lucky that I had that.”

Find out what makes Taylor Schilling happiest on the next page…

So what makes you happiest?

“Wow, what an intense question. I feel most satisfied when I’m in nature. And for me, there’s a lot of satisfaction in stillness. Right now, I’m really trying to
read more and want to start writing. I also like painting… Although, I actually hesitate to say that because I just started up again.”

“It is! But I also really
like to work. My life seems to work better when I’m working.”

You live in New York, but are you thinking of moving to LA?

What are you most excited about then moving forward?

“I really enjoyed shooting the second season of
Orange Is The New Black. I’m really having fun with it.”

It’s kind of the golden age of TV.

“There just might be more of an opportunity in television right now to tell different stories. I’m definitely not an authority, but what does seem interesting to me is that near the end of the ’60s, when the studio system sort of fell apart, all these great independent film makers started making really interesting movies on their own and there was a complete shift in cinema and American film. It seems to me that the studio system is now collapsing a little bit—but people are always going to find ways to creatively express themselves. Right now, TV’s the place to do that.”