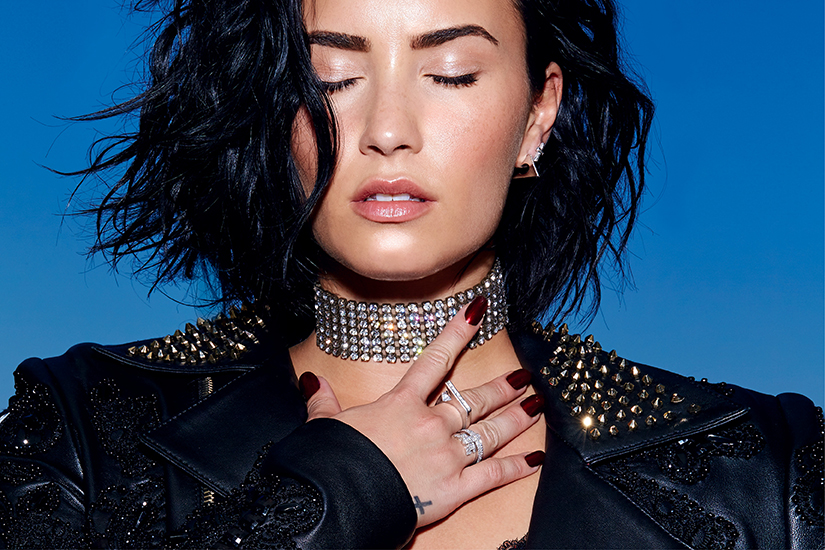 To explain how two miniature pigs ended up on the set of our cover shoot with Demi Lovato, we need to rewind to about 12 hours before the pair—one pink and one black and white—wound up lounging on a sofa in the W Hollywood Hotel, snacking on bananas in the California morning sunshine.

You see, the night before, the 23-year-old pop star and her boyfriend, actor Wilmer Valderrama, had announced their amicable breakup after nearly six years together. Five days before that, she lost her beloved great-grandmother. It was also the six-month mark in a year she later described as “difficult.”

Which is where the mini-pigs-—who had been bathed in lavender water and rubbed with coconut oil—came in. Thinking that Lovato might need cheering up, her assist-ant organized them as a little surprise. When the singer arrived on-set, barefaced and still in her gym clothes from that morning’s workout, she only spent a few quiet moments with the piglets. (She later confessed she thought they smelled a bit “funky.”)

The day was business as usual, albeit a quieter, more subdued version of the typical hair-nails-makeup-wardrobe-shot-wardrobe-shot routine of a cover shoot. Lovato is more reserved in person than you’d expect based on her public persona. She still presented as the strong, out-spoken young woman who just released an album titled Confident, but she seemed a little more fragile and a little more tired on that particular morning. (Later that afternoon, we had to put things on hold so she could take a nap.)

We started the day on the hotel’s helipad. It was bright, and Lovato was visibly struggling with the glare, despite her bodyguard holding an umbrella overhead, her sunglasses at the ready between camera flashes.

“I couldn’t wait to get out of the sun!” Lovato says when she calls from her car, en route to therapy, a few weeks later. “I was taking deep breaths and thinking ‘I can get through this. It’s just bright outside; it’s not the end of the world!’” she adds dryly.

“That day was definitely challenging, but I have a strong work ethic, and I don’t like to cancel things,” she elaborates when asked what she thought of the shoot. “I like to keep busy when I’m going through stuff.”

To say that she has had previous experience “going through stuff” is like saying the five-octave belter has a good vocal range. A Disney child actor who rose to fame co-starring with the Jonas Brothers on Camp Rock, Lovato checked herself into rehab for drug and alcohol addiction when she was 18 and has since received treatment for bulimia and self-harming. She has said that, at the time, she didn’t expect to make it to 21.

The extraordinary thing about Lovato’s story is that we’re not now watching the downward spiral of yet h another child actor play out in the tabloids—although in a recent interview, Lovato confessed that as a 15-year-old coming up in the year of Britney’s and Lindsay’s very public meltdowns, she thought that was likely her future too.

Instead, we’re hearing about recovery and sober living from a young woman who had her last drink four years ago. Today, she is held up as a role model of what a healthy, fit person looks like. That she has managed to do it while recording four certified-gold albums, judging The X Factor and writing a bestselling book, Staying Strong: 365 Days a Year, seems like a footnote.

But it does help explain her impressive social-media following: 36 million on Twitter, 41 million on Instagram and probably as many on Snapchat, if it were possible to see the number of views on the star’s daily updates. (On the day we chatted, she’d bought a bright-orange Hermès Birkin and Snapped her around $15,000 “impulse” purchase.)

Lovato has just “returned” to social media after a one-day break. She’d sworn off Twitter and Instagram after getting embroiled in a somewhat bizarre feud with Mariah Carey fans. (She commented on a meme comparing Carey and pop singer Ariana Grande, saying “Mariah is a legend and is so talented but constantly disses people. It’s nasty the way she treats Jennifer [Lopez].”)

“I came back so quickly because I was like, ‘You know what? Fuck this,’” says Lovato when elaborating on her return tweet of “I’m back bitches. And I’m coming back more honest than ever.” She continues: “It doesn’t mean that I should punish my fans for what my haters say. I’m just so tired of caring.”

In the tweets marking her return, Lovato also sarcastically noted “That one time I started my own charity providing mental-health care for people who can’t afford it and this is what y’all talk about.”

Lovato, who lives with well-managed bipolar disorder, repeats that exasperation to us. “It’s frustrating to see my charity work overshadowed by silly things, but you have to roll with the punches.” That work, which includes lobbying the U.S. government for better federal programs for mental-health treatment, is what Lovato calls her “purpose.”

“The accolades that matter most to me are the ones that recognize the work I’ve done charity-wise,” she says. “That’s really what matters most. No number one single can ever top that.” (Those accolades include a GLAAD award for her advocacy of equality for LGBT people and, perhaps most meaningfully, the testimonies of “Lovatics” who credit her radical transparency with saving their lives.) “It’s the thing that keeps me strong, makes me feel that when I want to give up, I know I have this going for me.” When asked to imagine a life without her voice, Lovato is nonplussed: “I know that I’d be okay. I do so much with my life that is more fulfilling than singing songs.”

Lovato is strong, but she’s not bullet-proof. In fact, she calls herself “the type of person who feels everything.” It hurts her, for instance, when she is criticized in relation to other people, which is perhaps an allusion to the constant comparisons to her fellow Disney child stars turned pop stars Selena Gomez and Miley Cyrus. “I’m me,” she says. “I’m not anybody but myself, and I wish people would stop comparing me to others.”

And while she finds her value in “the amount of love I give to people,” Lovato has also discovered the flip side of that the hard way: “There are times when I give too much to other people. I’ve had friendships in my life where I do so much for the other person and it goes completely unrecognized or I get treated badly. That’s something you don’t forget.”

A beat, and then the Demi who “just keeps on trucking,” the Demi who’s set to go on tour this summer, come hell or heartbreak, is back. “I have to remind myself that life is life, it is what it is, and nothing is painful enough to keep me from following my dreams.”

And time now for a much lighter speed round:

What do you believe in?
“Aliens! I’ve seen a UFO. A couple of years ago, I was walking outside and I looked up and it was almost like there was a worm in the sky. It was changing shapes and moving all over the place.”

What’s your core value?
“Don’t change for anybody else. Just be you. And don’t give a fuck.”

What’s your most recent online purchase? “A Snuggie that’s in the shape of a mermaid.”

Which emoji do you use most? “The one that has squinty eyes and the tongue out of its mouth.”

Who was your most recent text message from? “My trainer telling me she was proud of me.”

How would your oldest friend describe you? “Fun. A good time for me is just laughing.”

What’s your Starbucks order? “An iced green tea with one pump of sweet.”

When you’re 30 years old, you will be… “Hopefully still doing what I love.”

When you’re 70 years old, you will be… “Hopefully with the person I love.”