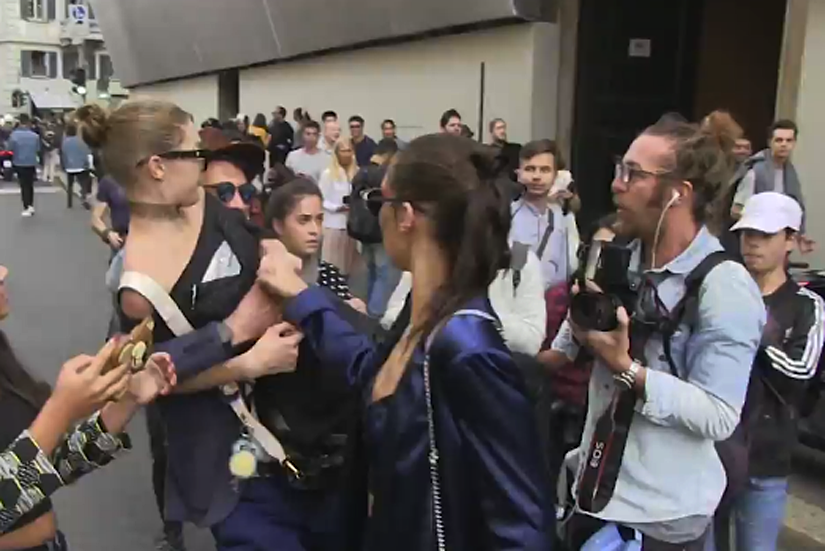 Supermodel sisters Gigi and Bella Hadid were greeted by the usual frenzy of fans and paparazzi after walking in Max Mara’s Spring 2017 show when things took a frightening turn.

As they navigated through the crowd, a complete stranger crept behind Gigi and lifted her off the ground. Others are now reporting it was notorious celebrity prankster, Vitalli Sediuk, who, if you recall, got slapped in the face by Will Smith after trying to kiss him on the red carpet at the Men in Black 3 Moscow premiere and was arrested for crashing the stage at the Grammys in 2013.

Whoever it was, it wasn’t funny. The panicked model instinctively reacted by shouting and elbowing him in the face. “Let go of her,” cried Bella.

It didn’t take long for him to put her down and just casually walk away. Gigi, visibly shaken, stormed after him, yelling, before turning around to get back to the car.

She took to Twitter after the incident to address her actions.

and had EVERY RIGHT to defend myself. How dare that idiot thinks he has the right to man-handle a complete stranger. He ran quick tho ????

She’ll probably need a talk with her security detail, even if she can clearly hold her own in a dangerous situation.

Watch the disturbing video below.