If you're going to shoot a perfectly of-the-moment Canadian designer editorial, there's only one model for the job right now: Winnie Harlow. 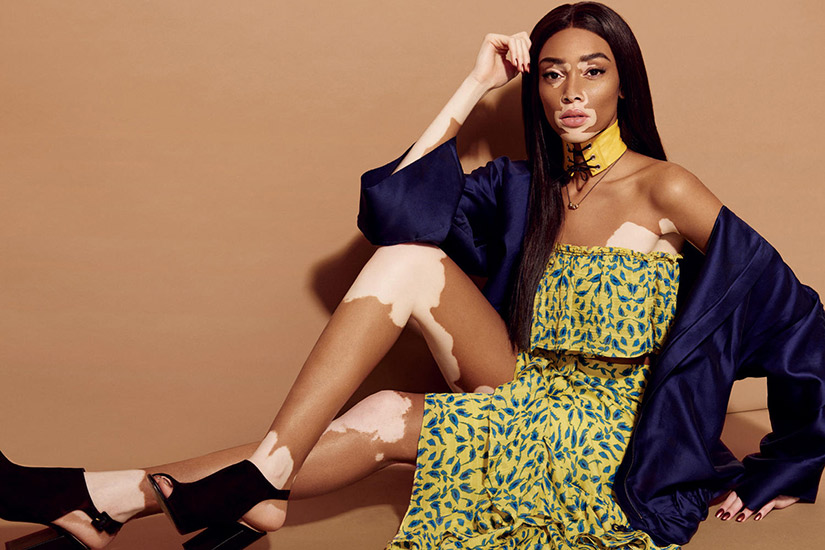 There are the obvious reasons—she’s from Toronto, for starters. She’s got strong industry relationships, most notably with rising star Mikhael Kale, who made her a custom piece to wear to this year’s Canadian Arts & Fashion Awards, for which she was a judge. There’s also the way she relates to this country’s style DNA, describing DSquared2, for example, as designers who “embody everything within me. [Their aesthetic is] crazy but still classy.”

And then there are the more abstract dots to connect between Harlow and the Canadian fashion biz: the way her unconventional career (which started when Tyra Banks discovered her on Instagram) mirrors the off-the-established-maps direction in which Canada’s fashion industry is heading (RIP, Toronto Fashion Week); their shared David and Goliath struggle to make a mark in an industry that favours the established and easily digestible; and, yes, there’s also the way that Harlow, who has recently relocated to London, and many Canadian designers feel that sustainable success lies outside our country’s borders.

Or, you know, we could just go with the fact that Harlow is totally a model of the moment who shows these clothes to their best advantage. Bonus: She’s a great storyteller.

Which brings us to the part where we’re all on lunch break for this shoot and she tells us a story about that time she did shots with Prince Harry. (Unfortunately, what is discussed on-set over chicken and quinoa stays on-set.) Now, if this anecdote surprises you, then you’re probably familiar with Winnie Harlow in her “role model” incarnation, a designation she says she never asked for, FYI. (More on that later.)

You probably watched the cycle of America’s Next Top Model that introduced the world to the girl with vitiligo from the GTA and on which she won the highest number of public votes. You may have seen her TEDxTalk, “My Story Is Painted on My Body,” which she gave in 2014 under her given name, Chantelle Brown-Young, and which has had over 500,000 views. And if you’ve seen her in Beyoncé’s Freedom video, there’s a good chance you also remember when Drake name-checked her in a song on If You’re Reading This It’s Too Late.

But if the Prince Harry story feels like an “Oh, Winnie” moment, then either (a) you read the Daily Mail (safe space here) and so will have seen her “stepping out” on the regular, sometimes with rumoured (and maybe ex?) BF Lewis Hamilton, (b) you’re one of her 1.5 million Insta followers or (c) you spent a day with her, like we did, chatting about everything you’d expect any other 22-year-old would be into: boys, hair, funny things her relatives’ kids say.

And that’s the fascinating thing about Harlow: She’s not exactly distancing herself from the physical difference that initially brought her fame (and campaigns for Desigual, Sprite and Swarovski), but she is trying to move beyond it.

On-set, we got the sense that Harlow was there to be a model—working hard to get it right, giving as much on the 12th shot as she gave on the first, not complaining about things running over schedule—but she wasn’t there to be a spokeswoman for vitiligo. In fact, the only time that she was anything but relaxed was when someone asked her an offhand question about the condition. Harlow answered it briefly—the Coles Notes version of an explanation she has clearly given 1,000 times before—but it obviously broke her flow in front of the camera. Shortly after that, she asked her cousin (who’d come with her, along with an assistant) to change the music playing on the studio’s sound system. “Something I can dance to,” she requested from behind the camera, swishing the black Sid Neigum dress around her.

Credit: Nelson Simoneau. Winnie is wearing a jacket, top and skirt  by Markoo, a choker by Hayley Elsaesser, earrings by Alynne Lavigne, ring by Betty Barbs, ring by Malorie Urbanovitch and boots by John Fluevog.

Later that same week, our editor-in-chief, Vanessa Craft, got on the phone with Harlow to keep the conversation going (they really bonded over that chicken and quinoa at lunch, okay?) and had a chat about career, labels and the fact that she’s just getting started.

What have you been up to since the shoot? “I’m taking my time being home [in Mississauga]. Today my girls are coming over and we’re going to make American Thanksgiving dinner.”

Are you a good cook? “I make a good oxtail stew, but I don’t cook too often so I don’t know what else I could make.”

You just need one showpiece dish and then you can pretend. “Right? The mantrap!”

[Laughs] Okay, we need to focus on this interview. Have you ever made any fashion faux pas? “My sense of fashion has developed a lot. Even working with my new management for the past year has changed it. I still have my ’hood style—I still like to wear my gold chains and my grills. I’m surprised I don’t still have a gold nameplate from back in the day.”

Speaking of back in the day, I know when I was growing up, I wasted a lot of time trying to fit in and not be different from everyone else. Was that your experience? “Like any other kid, I was trying so hard to fit in that school made no sense to me. I wasn’t attending class; I was trying to hang out in the caf with the cool kids. I was always trying to be cool. In the end, the vice-principal told my mom it would be best for me to go to an alternative school where I was only there when I had class and then I left. That helped me to focus on my studies and not on everyone else and what they were doing.”

Did you grow up feeling comfortable in your own skin? “As a child, I really hated it. I think, regardless of my skin condition, my mom is very conservative with dressing—like, when she’s helping me do laundry and she sees a thong, she’s like, ‘What is this dental floss in your laundry basket?’ With my skin, I have to avoid direct contact with the sun, so that combined with my mom being conservative meant I grew up wearing stockings under shorts and long sleeves under tank tops. It was kind of embedded in me that I was supposed to be covering up. As I grew up, people would still stare, but, I don’t know, me feeling uncomfortable just disappeared. I’d be walking out with friends and they’d be like, ‘Don’t you feel everyone staring?’ and I’d be like, ‘No, I actually don’t. I just don’t care.’”

Do you ever get tired of having to address all this? “I’m very sick of talking about my skin.”

There’s so much more to you than that. “Precisely. I am literally just a human. I have the same brain as you; there’s a skeleton under my skin just like yours. It’s not that serious.”

On-set we talked about how as women of colour become more successful, you often become the only black person in the room. Do you ever feel pressure to perform or speak on behalf of “all your people”? “I don’t put pressure on myself. People try to put it on me—like I speak for women, for black women. There’s so many other pieces to me. I’m not a vitiligo spokesperson just because I have vitiligo. I don’t perm my hair anymore, but I’m not a natural-hair expert just because it grows out of my head like that.”

So true. “I’m just living life. And if that inspires you, I’m proud, but I’m not going to put pressure on myself to be the best person in the world and tell everyone I have vitiligo. If you want to know about it, you can do your research. Either way, I’m not in the dictionary under ‘vitiligo.’”

Credit: Nelson Simoneau. Winnie is wearing a gown by Greta Constantine, cotton hoodie by Atelier Wonder, earrings by CG Chris Gelinas, chokers by Biko, a ring by Alynne Lavigne and a ring by Anne-Marie Chagnon.

Your career has really taken off in the past year. Do you have a proudest moment so far? “When I signed with my new agency, I had a list; I said these were the things I was trying to accomplish in one year and five years. One thing on my list was [to do] more covers, and I already have five covers.”

What’s the biggest goal for you? “As a woman, one day I will have a family and be a sweet little housewife and take my kids to soccer and ballet and piano lessons. But until then…”

I’m hitting the club. “That too! [Laughs] I plan to walk for Victoria’s Secret one day. I’d be so honoured if they would have me. People say I should get into acting because of my big personality, and, honestly, I will say I’m a bit of a crazy person. I walk around my house having a fake argument with a boyfriend who has cheated on me, and I’ll go so far as to have my eyes watering as I’m cussing out this fake boyfriend, just to see if I can pull that emotion.”

Do you have a mantra? “I have a couple, but one of my most liked Instagrams is actually a quote I came up with myself. It’s ‘Confidence doesn’t eliminate insecurities, and insecurities don’t mean you’re not confident.’”

Did something happen in your life to inspire that? “This goes back to me not talking about my skin. The picture was me in a bra and underwear, and when I took the photo, I was in the middle of doing my makeup. Everyone was like, ‘Oh, if she’s talking about confidence, she must be talking about her skin,’ but I was actually just saying that we all wear makeup and have insecurities. My contour is an unblended stripe on my face, and no one even saw that!”

Do you feel like people project onto you that you have to always be about loving yourself, never changing yourself? “A former friend of mine got a nose job, and I was the most supportive person of that nose job. I’m not the person that people portray me to be. I love myself the way I am, but people will always message me about other people with vitiligo who cover their skin. ‘Winnie Harlow, you need to tell them that they need to love themselves the way they are and stop covering their skin!’ No! If that’s what makes them comfortable and what makes them happy, let them be. This is just what makes me happy. Right? So that’s why I do it. But that’s not me saying ‘Well, you must never get a nose job, you must not cover your skin, let your pimples shine free.’ [Laughs] Cover all of those fuckers up.”