EXCLUSIVE: Stella Maeve dishes on your next magical TV obsession 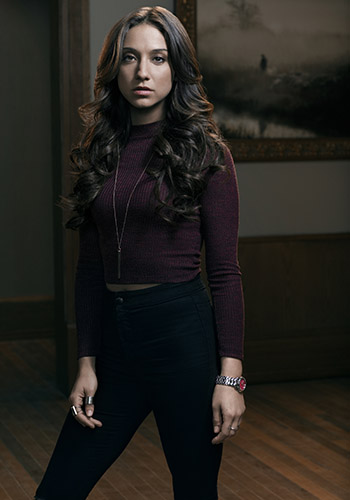 After several years of guest roles—a little Law and Order here, a stint on Chicago P.D., even two episodes of Gossip Girl—26 year-old Stella Maeve is having her break-out small screen moment in The Magicians, a dark, thrilling story about a university for magicians, premiering tonight (Jan 25) on Showcase. We sat down with the petite Maeve on a her flying visit to Toronto last week, where she bravely fought a nasty head cold to answer our questions about building backstories, inheriting a book’s passionate fanbase, and her own special theory about horoscopes.

Q: This show, The Magicians, has been described as “Harry Potter for grown ups”. Do you think that’s accurate?

A: There was one author in particular who described it as “Bret Easton Ellis meets Harry Potter”. And I’m kind of with him on that. I just like that they show these characters flawed and human. And magic is sort of this hard thing that isn’t necessarily always going to save the day, which makes it more relatable.

Q: You play Julia, a young woman who’s gotten into Yale for grad school, but doesn’t make it past the entrance exam for this magical university, and then has to go search for her magical education in a less…traditional way than her best friend Quentin, who gets into Brakebills. In the magical sense, she’s an underdog.

A: Yeah, which is crazy for Julia because I think this is a woman who never really failed at anything her entire life. For the first time she’s experiencing rejection. And I think that’s tough to take for her. Quentin is her best friend. It’s like a seesaw. And you see him the underdog kind of get on top, and her experience this failure.

Q: Can you relate to her experience of being good at something and then realizing there are people better at it than you? Or letting a dream die?

A: As far as academia is concerned, no! I think I made honour roll once. I think the things that Julia and I share are the passion and the drive, knowing what it is you want and going for it. I think the only difference is we get to watch Julia sort of figure out why it is she wants this certain thing. At first it’s like we introduce magic and it’s kind of its own character on the show. If magic was real, what would you do with it? Would you do good? In theory you be like you wanna use it to change the world and make it a better place. But, really, would you?

Q: What is it that you are driven about?

A: I love what I do. I was talking about this earlier actually when we were getting ready. I went to this Bowie exhibit two years ago, and in it he said something, along the lines of, no matter what he always needs to be creating, whether its writing or dancing or dressing up in crazy costumes or acting. I think that’s a true artist. That’s a great quote. I feel like I constantly need to be creating. And so when it’s acting, it’s always acting, acting is #1. When it’s not throwing myself into the work and becoming another person, it’s me playing my bass or playing drums or trying to learn Spanish or writing.

Q: Have you figured out your “why” behind that creative urge?

A: I wanna reach people through my art. And I want someone to be able to utilize what it is we bring to the screen as escapism or something to relate with. It feels nice to be able to watch something and say, “I totally get that, I went through that, this person captured exactly what my family is like”. Or the complete opposite. To be able to be like, I don’t want to think about my family at all or whatever that is, and to be able to turn on the TV.

Q: I think a lot of people will relate to the character of Quentin, who says in the first episode that he’s always felt like never really fit in anywhere.

A: There’s an interesting generation of 20-somethings who don’t know what they’re doing. We’re in a day and age when we graduate high school and it’s like then what? Or you graduate college and you have this degree and it’s not necessarily what you want to do with your life. It’s this weird sort of lost generation. I think it really speaks to that. It’s kind of like, wait a minute, you’re not alone, and maybe don’t jump into something until you’re absolutely sure it’s what you want. Or it’s okay to take the time to figure it out. And life will happen and sort of guide you.

Q: And what would you do with magic if it were real?

A: I think magic does exist, in this ethereal sort of sense. What I would do with it? I think it’s not up to me. I think it’s just kind of here. I mean, you’re saying, like, if I had a specific magic power?

Q: Yeah, like if you could be invisible or fly…

A: It would be really cool to time travel. That’d be pretty awesome. And also to be able to disappear but still be present, like to be invisible.

Q: You might end up listening to conversations you don’t want to hear.

A: But also what if you were just sitting in a room, and there was like water being sprayed everywhere and drying on someone’s face…It would just be fun to play pranks on people.

Q: You said you think there’s magic in the world. What do you mean by that?

Q: Do you believe in psychics, that kind of magic?

A: I’ve had experiences that were like, “woooahhh!” And I grew up in a home with my mom where she does healing hands, energy healing, Tarot. I think all of it is really fun and cool. I don’t know if you can deem it correct. I don’t know. But I’m open to it. I like a little bit of the witchy world. It’s interesting and it makes life less boring. It’s nice to have something to sort of believe in. I think some people are in touch. I think other people are trying to make a pretty penny. I’d like to think I have a little gypsy in me. It’s the same thing with horoscope. I have a cool theory actually on horoscopes.

A: I think it’s not like “Oh you’re a Cancer, you’re really sweet and sensitive.” I don’t think it’s like that. I think it’s like at the time you were born where the moon was in rotation and the ocean tides, what are we, like 90% water, I think there’s definitely an effect on like when you were brought onto this planet and what’s going on geographically in that sense, like, you know where the ocean tide is, what cycle the moon is at. I think that your chart for sure scientifically has something to do with that.

Q: How much of that was green screen, special effects?

A: When we did “magic” with our hands we did something called a tut, tutting. It’s really cool. It’s kind of like a dance with your fingers. You can compare it to pop and lock, but with your hands. And each character has a different style. We had a choreographer help us on set named Kevin who is really cool. With Julia it’s interesting because she’s not good, she not getting the education they’re getting at Breakbills. So she’s trying to figure it out and hers is a little messy. It’s like street magic so she’s trying to sort of grasp it. Once she gets it down, it’s fun. I actually got tendonitis in my wrist!

Q: So this show is based on a beloved series of books by Lev Grossman. Is there a lot of pressure bringing such well-loved characters to life?

A: It’s terrifying trying to depict a character that’s based on a real human or even worse written in a book in fiction. Julia is a huge part of this trilogy. Surprisingly, everyone seems really happy. I couldn’t believe it. When I first got this, I was like, ‘I don’t think I’m anything like this woman!’

Q: Is it weird to be cast as someone you don’t see in yourself?

A: It’s bizarre. I think that’s the whole point. You want to be something different and hopefully fill those shoes as best you can. But so far fans seem happy so I’m happy. I tried to do it justice and do the best job I could with her to make her true to the books and to the writing as possible.