The supermodel of the future is here. 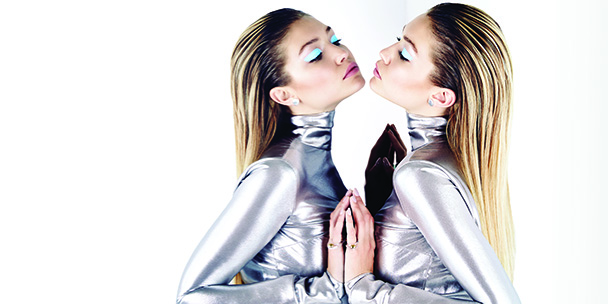 Jelena “Gigi” Noura Hadid arrives on-set for her cover shoot with ELLE Canada as low-key as a photographer’s assistant. Wearing a black leather biker jacket, leggings and sneakers, the 20-year-old slips into our West End Toronto studio with little fanfare. She says a quick but friendly hello to the crew and then heads over to wardrobe to change before hair and makeup. This quiet entrance belies the star power behind one of the world’s most influential models.

Hadid’s most beguiling images often centre around her aquamarine eyes. There’s a gentle detachment to her gaze, an air of mystery. When asked what the secret is to taking a good picture, she pauses and then admits there is a certain art to it. “You learn what looks good,” she says.

“And then, sometimes, you can turn the tables and only do things you know make you look good so you’re always happy with what comes out. You learn what things to think about to make your eyes light up.”

When pressed, she politely demurs on just what exactly those things are. (Her boyfriend, Joe Jonas? Her beloved family? Her skyrocketing career?) Perhaps us not knowing is part of what makes Hadid’s images so compelling. Her beauty effortlessly blurs the line between commercial (she’s a Sports Illustrated star) and high fashion (Tom Ford anointed her the face of his Velvet Orchid fragrance), something she has in common with certain other models who hit stratospheric levels of success. (See: Cindy Crawford, Gisele.)

Hadid’s first look out of wardrobe is a silver Misha Nonoo minidress, with a neckline cut to the waist, that renders everyone speechless. The stunned silence for this otherworldly space-age stewardess doesn’t last long, though. As per her request, a mix of friend Taylor Swift’s albums blasts from the speakers, inspiring her to ham it up on camera. “When we go crashing down, we come back every time / We never go out of style,” she lip-synchs with a grin.

The set becomes a daytime dance-off, and the entire crew gets sucked into the party atmos­phere. It’s fun, and Hadid is charming as she dances and turns it up. But as playful and relaxed as this scene is, one thing is certain—she is aware of it. It would be impossible for her not to be when half of us are photographing her being photographed to post on social networks later.

This heightened awareness is the key difference between modelling today versus in the past. There is no such thing as dancing like no one is watching. Someone is always watching. Take Hadid’s highly conspicuous entrance the night before the shoot to a rooftop party in Toronto for Maybelline New York. She arrived with then-brand-new beau Joe Jonas in tow and mingled in a swarm of camera-phone-wielding beauty editors, television media and bloggers. Images of Hadid wearing a white tux jacket by Canadian designer Smythe and graphic white eyeliner instantly appeared on Periscope, Instagram and Twitter.

The Joe Jonas thing was big news; it was one of the first times they could be “verified” as a couple in public. (Model Cara Delevingne, a close friend of Hadid’s, officially confirmed the relationship a few weeks later with an Instagram photo of the pair, who were by then serious enough for her to dub them “G.I. Joe.”) By the next day, shots of Hadid holding a pink curly straw had gone global, helped in part by her own party selfie, which garnered 334,000 likes and comments like “My life, my screensaver!” “I’m obsessed!” and “Eyeliner goals!” from rabid fans.

Hadid loves social media for this exact reason. “Now you can be someone’s favourite model because of how they connect with you on Twitter,” she explains, “or because of your sense of humour, or what you believe in, or your willingness to stand up for certain things.”

Much has been made of Hadid’s social-media prowess (she has six million Instagram fol­lowers)—she knows that this presence helps separate her from the competition. “I can be so different from another blond girl,” she says when asked about the opportunity to be seen through more than one lens. “Finding what’s different about you and really showing it off creates a new level of connection between you and the people supporting you.”

The modelling game has changed. It’s not enough to have glossy blond hair or a body rem­iniscent of juicy ’90s-bombshell-era women, such as Claudia Schiffer. Hadid, a self-described “total goofball,” is a clear leader in a generation that finds value in making genuine connections. To succeed, you have to have a personality and a strategy. “When I go into a job, I want to touch people,” she says. “I want to make a connection. That’s so important in creating relationships, and relationships are what create opportunity.”

Certain developments solidify a modelling career: getting an agent, walking the runways in Paris. But the motherlode is a lucrative cosmetics contract. Hadid reached that milestone when she was signed as the face of Maybelline New York. “That was one of our goals,” Luiz Mattos, her agent at IMG, tells me over the phone. “We sat down together and planned where we wanted to go. We knew the potential.” Mattos describes Hadid’s image as “all-American, wholesome, healthy and sophisticated.”

This image, and her multicultural background—she has Middle Eastern and Dutch parentage— is perhaps why Hadid connects so well with the all-important Generation Y. “I came into fashion at a time when the industry was ready for my look,” says Hadid. “I don’t believe in luck, but I do believe in timing.”

Leonardo Chavez, global general manager for Maybelline New York, calls Hadid “the perfect emblematic It girl.” Unsurprisingly, her ability to connect with women was a significant factor in sealing the deal, he says. She engages with them “in a way that advocates positivity and promotes confidence.”

On-set, we witness just how easily Hadid cultivates relationships. ELLE Canada asked Toronto-based designer Mikhael Kale to create a custom #Gigi shirt for our shoot, and when he personally comes by to drop off the white satin crop top, Hadid can barely contain her excitement. She gushes over his work, says she’s thrilled to wear a handcrafted piece of his and asks him to consider making her something for the upcoming MMVAs. Within 10 minutes, they’ve exchanged details and made plans.

A week later, Kale flew to New York City (where Hadid is based) for a consultation and eventually made her a slinky beaded outfit with #Hadid on the back for the awards show. “She’s just a lovely person,” he says, his voice warming over the recollection when we chat on the phone a few weeks after the shoot. “The first time we met was that day on-set. I went in for a handshake, and she went in for a hug! She’s very down-to-earth and level-headed—you can tell she was raised right.”

Hadid’s upbringing often comes up when those in the industry talk about her. The daughter of real-estate mogul Mohamed Hadid and former model Yolanda Foster (now divorced), Gigi, sister Bella and brother Anwar were brought up in the wealthy setting of Malibu, Calif. Hadid began modelling when she was just a toddler (her first gig was for a Guess ad), but when she was nine, her mother took her out of the business and put her into sports like volleyball and horseback riding instead. This, insists Foster, is why her daughter remains grounded to this day—she didn’t always get the wins or results she wanted.

“It made her a hard-working competitor,” she says in an email, “so now when she puts her mind to something, she won’t let go until she gets it.” Foster finds it “hurtful” when people chalk up her daughter’s success simply to privilege. “She has tenacity and great integrity, and she works hard to be the successful and financially independent young woman she is.”

Foster, a personality on The Real Housewives of Beverly Hills, is no stranger to the camera. When, as a teen, Hadid stepped back into modelling, Foster gave her the gospel on how to manage her career. “I told her ‘The industry is full of the most beautiful girls in the world who deserve the job as much as you do,’” she says. “To stand apart, Gigi would need to share her heart and be authentic, honest, kind, humble—and, most importantly, always be grateful to be chosen. People won’t remember what you look like or what you said, but they will remember how you made them feel.”

These words have resonated, it seems. For Hadid’s birthday last April, she asked friends and family to give her McDonalds gift cards instead of presents. This, she said (on Twitter), was so she could keep them in her wallet and hand them out to those she passed on the streets of New York who were in need of a meal. Hadid is also not really a girl who goes hardcore on a night out, preferring instead to stay out of the scene when she can.

A few months ago, she Instagrammed a meme of Kourtney Kardashian’s son out at an event asking his mom if they could go home. Tagging fellow model Kendall Jenner, she added the comment “Us at parties after 11pm?”

Jenner is a close friend of Hadid’s, along with Delevingne, Karlie Kloss, sister Bella, Hailey Baldwin and Taylor Swift—a veritable who’s who of quarter-century power players. But Hadid insists the dynamic in her high-profile friendships centres around encouragement, not competition. Interestingly, the group discusses this as a tactic for success, both personally and professionally. “We talk about it a lot; it’s a conversation we often have,” she says. “We want to be the generation and the group of friends known for supporting each other. ‘Squad Goals’ is a big social-media thing right now, and that’s what we want to inspire in other groups of friends—to be proud of the power you all have when you’re together, which can be amplified so much by each person. That’s what has been cool about everyone’s willingness to be there for each other, and we don’t want to be like other generations who are infamous for their cattiness. That was cool and it worked for them and they were great. We just want to be the new generation.”

After numerous outfit changes, makeup tweaks and a quick FaceTime between Hadid and her mom, our shoot is a wrap. She rushes off to the airport for her flight back to New York while the rest of us remain, reviewing the shots. The buoyant, positive feeling that comes from a day spent making magic on-set stays with us for hours afterwards—proof that (Gigi’s) mom really does know best.

WATCH: Behind the scenes on our cover shoot with Gigi

16 times we wished we were Gigi Hadid