Emma Stone—our pick for the world's most likeable actress—opens up about beauty, style and Hollywood anxiety. 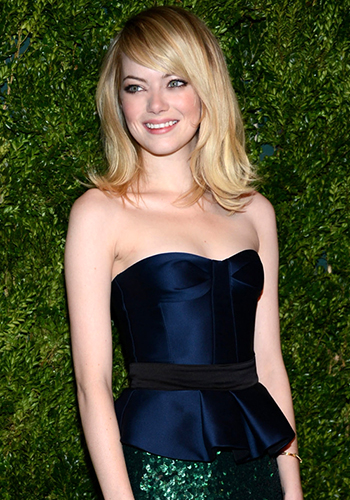 It’s hard to describe Emma Stone’s charms without sounding like a stalker. There’s something addictive about the way she laughs at her own jokes; the freckles that dot her
fair skin look like constellations.

These are observations that sound as if they were pasted together with letters cut from newspaper headlines, in classic psycho fashion.

So, instead, let’s just say that Emma Stone is unreservedly likeable and leave it at that.

The 24-year-old Arizona native made her big-screen debut in 2007 as Jules, the cool but approachable object of affection in Superbad. It was a bromance flick, but her dark-red hair and throaty laugh diverted attention.

When Stone stole Ryan Gosling’s heart in Crazy, Stupid, Love, she finally nabbed ours too. (That the movie’s adorable bed scene was improvised – the two were just cracking each other up with their own stories – is nearly too much.)

Stone stepped into more serious roles, playing a budding journalist – a career she considered when she was a kid – in The Help and a Jessica Rabbit-style seductress in Gangster Squad last fall.

It seemed she could be it all: funny, smart, sexy and so damn likeable. I wonder which of those sides will come out when I’m introduced to her. All of them, as it turns out.

"You don’t have an accent!" she exclaims in her signature rasp. Apparently, she has spoken to a lot of people with accents today. It’s the kind of offbeat observation she sprinkles into conversation like Pop Rocks, keeping you playfully on edge.

Her voice registers instantly, but the rest of her persona is more fluid. Her hair has shifted between her natural blond and a more recognizable red more times than a clutch at a car show.

While she has had time to experiment with her look – she only lent her voice to her latest project, The Croods, since it’s animated – she is now reprising her role as the very blond Gwen in The Amazing Spider-Man franchise.

Does Emma Stone identify more with being blond or a red head, find out that and more on the next page…

"Weirdly, I identify myself with
red hair a bit more now, though," she says. "I felt like myself for a while when I first dyed it blond, but the grass is always greener, you know? – or always redder or blonder on the other side." And there’s that crackling laugh.

Stone has a theory for why her hair seems to fascinate people. "I think I’m not that interesting, and I don’t talk about interesting stuff," she deadpans. "I don’t have much else to say."

Then she cracks up. "But I’ve grown a little bit weary of the hair talk. I would keep it blond because it’s cheapest for me in terms of upkeep. But you know, studios are paying to change it, so it’s a fantasy to have all these different hair colours."

It’s a hilariously pragmatic way for an A-list best-dressed-list stalwart to think about a defining feature. And Stone takes that as a compliment.

"I’m practical when it comes to my style," she explains. What makes her feel most put together, for example, is "a good night’s sleep, because if I don’t sleep enough, I hallucinate," she says with a laugh.

"Not legitimately, but you know the crazy brain that comes with not enough sleep? That cuts into my confidence."

That an actress who has been vocal about annoying acne and has described her beauty regimen as "super-slutty" (she never sticks to the same products) was tapped as a spokesperson by Revlon was a delightful surprise for some. That she’s the face of the brand’s new line of nail polishes was a surprise for Stone.

SLIDE SHOW: Get a fresh spring look with these 10 bright nail polish hues

"I look down at my nails now and it looks like I was digging through a sandbox," she says. "I don’t know what I get into, but by the look of my hands, it’s pretty gross."

I mention that I’ve seen the ads with her smiling face all over town. "Oh, lord, sorry!" she hoots. "I’ve seen them at drugstores and, for the most part, it’s like ‘Oh, my God, I need to go to a different aisle.’ I feel totally freaked out because it takes you by surprise when you’re going into, like, Walgreens and there’s a picture of yourself. It’s pretty terrifying."

Stone was first truly thrust into the spotlight when she took on a leading role in Easy A, which premiered at the Toronto International Film Festival in 2010. She isn’t really sure if it was the pressure of starring in a movie or if the attention came too soon, but she felt crushed.

She had stress-induced acne. The chronic anxiety and panic attacks she has had since childhood flared up. She never watched that movie. It’s a side of herself that the lighthearted actress has been remarkably frank about.

Emma dishes on why being honest is important and the significance of her friendships, on the next page…

Maybe it’s because she grew up admiring comics, like Gilda Radner and John Candy, who struggled with their own demons. Maybe she just doesn’t think it’s that big of a deal. "Well, anxiety is part of my reality, so why not talk about it?" she says carefully, clearing her throat. "It’s just part of whatever happened to me when I was really, really little. It’s just kind of something that I manage."

I wonder if that kind of honesty takes a personal toll, though. Maybe that’s why so few choose it. "As long as it’s me talking about my stuff, then I feel good; but if it’s bringing anyone else into the equation," she says, stepping around her relationship with Spider-Man co-star Andrew Garfield, "that’s too personal for me to ever talk about. I feel okay talking about me."

How to be romantic: 5 tips on keeping the romance alive in your RELATIONSHIP

Stone seems to sense that our conversation has gotten serious, and her energy shifts. "I love talking about me," she coos with a laugh.

She doesn’t want to drag her posse of famous friends – Taylor Swift, Ryan Gosling – into the mix, but she admits she leans on them. "Friends in general bring a sense of peace and calm and fun to my life," she explains.

"They’re basically my family – as well as my actual family…. I’m lucky that I travel a lot and live in different places, but it’s also a difficult part of the job, so anytime I get to have real face time with my friends – not iPhone FaceTime but, like, real face time – I’m happy."

I hold myself back from saying that, you know, I’d settle for a FaceTime call sometime. You know, I don’t want to sound like a stalker.

Emma’s beauty must-haves
• "Revlon’s Nearly Naked is very light and it has SPF in it, which is great because you can throw it on and then you have your whole situation figured out for the day."

• "I try to carry some type of moisturizing agent with me wherever I go. Most of the time I carry Josie Maran Argan Oil."

• "My hair is definitely a lot easier to maintain when it’s blond."