ELLE Canada sits down with indie artist Janelle Monáe to talk about confidence, feminism and ambition. 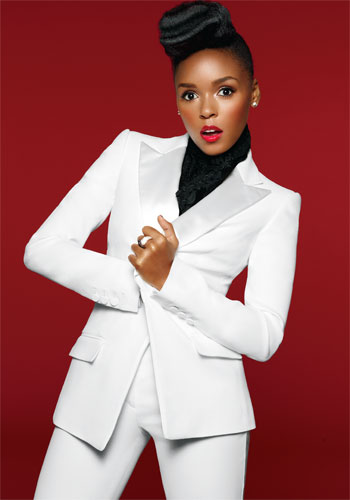 There is a socialite clapping thunderously in my ear. I can’t blame her. Janelle Monáe just put on a cape while spinning like a top onstage and singing her smash hit "Tightrope."

It’s like the second coming of James Brown. The crowd – a mixed bag of hipsters, drag queens and ladies who lunch – at Toronto’s Fashion Cares gala in September is pulsing with delight.

Then Monáe drops the cape and walks offstage. The energy follows her, sucked out of the room like a vacuum. When I meet the 26-year-old singer the next day, I’m surprised by how slight she is.

During her show, it felt like the sheer force of her performance would rip the paint off the walls. Now she’s curled up, like a cat, on a loveseat with a hat pulled over her signature bouffant.

"I am naturally shy," she says softly. "That’s what people are most surprised by, because when I’m onstage there’s nothing shy. It’s all electricity. I feel fearless."

She inherited her "crazy side" from her outspoken mother while growing up in one of the grittiest neighbourhoods in Kansas City.

She’s speaking matter-of-factly about how poor they were and what it felt like to watch her older cousins get into trouble.

Then her face lights up and she starts swiping through her phone.

"I got this Facebook message and it really just touched my heart and reminded me where I came from and how I can never complain. I’ll show you," she says, scrolling down her wall, which is bursting with exclamation points from fans.

The message is from a girl whom Monáe worked alongside as a maid, cleaning houses while trying to make money for college; she’s congratulating Monáe on her success and reminiscing about listening to her sing while they cleaned. There are a lot of emoticons. There are a lot of actual emotions too.

"A lot of the women I worked with had rough lives," says Monáe. "They were recovering addicts or getting out of jail." The cleaning service hired desperate women who couldn’t get a job anywhere else. Monáe herself was desperate to leave her hometown and attend the American Musical and Dramatic Academy in New York.

She’d always wanted to be a musician. (In fact, she told The Guardian that she wrote her first musical when she was 11. It was about plants, and it was inspired by Stevie Wonder’s Journey Through the Secret Life of Plants.)

Monáe made it to the academy, but she eventually dropped out and moved to Atlanta. It was there that she co-founded the Wondaland Arts Society, a co-operative of artists, musicians, writers and performers.

"We were literally just going from campus to campus, performing and selling CDs out of our trunk. We were doing it grassroots," she says with a smile. It wasn’t long before Monáe’s powerful funky vocals, spellbinding dancing and regular stage dives caught the attention of Outkast’s Big Boi.

He introduced her to his friend Diddy, and, in a flash, Monáe was signed to Bad Boy Records and working on her debut album, The ArchAndroid. Released in 2010, the record introduced her patented blend of soulful, funky R&B.

By the following summer, she was nominated for a Grammy and performing onstage with Stevie Wonder. (This year, she’s up for multiple Grammy awards for her guest vocals on Fun.’s hit track "We Are Young.")

I’m expecting Monáe to be starry-eyed while recalling this climb to fame. But that just shows how little I know about her so far.

"You have to protect your heart and your spirit so you’re not
tainted by money, greed, power, arrogance…. I don’t get off on those things," she says flatly.

She doesn’t really party at clubs anymore. In fact, she seems disinterested in the trappings of the pop-star world – she’s too preoccupied with her responsibilities. "I have responsibilities to make sure I’m setting an example," she says at one turn.

Inspired by far-out theorists like Ray Kurzweil, Monáe used sci-fi imagery as a metaphor for the African-American experience and created a trippy, captivating musical message of "coming together and creating something that represents imagination and acceptance."

I find myself thinking of Lena Dunham’s oft-quoted line in Girls: "I think I might be the voice of my generation." What made that statement so powerful – and so hilarious – was Dunham’s stoned, sheepish delivery.

So I’m picturing Dunham in her jammies because Monáe is saying much the same thing – in as different a way as possible. She’s crisp as she delivers her thoughts like perfectly paced prose. "I’m always thinking about how I want to speak to people," she says.

"I really want to open doors for all those starting to have their voice…. I want to speak to my cousins who are still in Kansas and feel like they don’t have anyone; I want to speak to the young lady who is trying to understand who she is and how she’s going to follow her dreams living in a disadvantaged environment."

Maybe that’s why she talks about her new role as a CoverGirl spokesperson with the lofty idealism of a political candidate. "I felt very honoured," she says.

"I want to present a different perspective of what it means to be a strong woman, and I just hope to be an inspiration to the next generation of girls, to help them define what makes them unique and what makes them special."

That sounds incredibly daunting, I blurt out. Monáe just smiles like a Cheshire cat. "I have no problem with it; I think it’s necessary," she explains. "I have to be a role model. I think there are certain people – and I think that I am one of those people – who naturally have leadership qualities."

It seems that Monáe thinks of herself as a modern Pied Piper, using her music to stir young girls. When we talk about The Electric Lady, the album she’s nearly finished recording, set to drop later this year, Monáe isn’t interested in discussing her musical references. (Though, off the record, her fellow Wondaland artist Nate Wonder eagerly describes what he says will be a brilliant follow-up to her first full-length album.)

Instead, Monáe talks at length about the effect she wants her record to have on people.

Like much of what Monáe says, it’s sweeping, grand and brave – but imprecise, somehow intangible. Listening to her can feel like trying to stand on a cloud before realizing it’s made of mist.

I’ve plunked in my iPod to play some tunes while we mill about the studio waiting for the cover shoot to begin. I know what kind of music Monáe likes: artists like Stevie Wonder, Prince and Michael Jackson – all inspirations for her own music.

So I crank up a Michael Jackson tribute station and "Black or White" is soon washing over the racks of monochromatic wardrobe.Then the tribute portion of the station’s programming kicks in.

Justin Timberlake and Ciara take over. Monáe’s assistant, Kim, a friendly classically trained opera singer who loves French music, slides over with a smile and message that boils down to "Um, no."

She pops in one of Monáe’s old iPods, and soon Stevie Wonder’s "Superstition" is thumping and Nate is shimmying quietly across the room, humming, his dreads swaying like willow branches.

Standing among her team, who are also all clad in signature black and white, Monáe looks like a diminutive army officer. Today’s uniform of white top, cropped black pants and patent Repetto slippers channels her unlikely roster of style icons, ranging from Karl Lagerfeld to Albert Einstein.

But, just as listening to the same two albums over and over would eventually make you blow your brains out, wouldn’t dressing only in black and white – sharply tailored pantsuits for the most part – get a little dull?

I feel my expression shift into the facial equivalent of "WTF." Over the years, she has given many reasons for her sartorial choices – most often, she says the look is to pay homage to her parents, who wore uniforms while working as a janitor and a garbage-truck driver, respectively.

This is not the kind of talk you hear very often. It’s jarring. Especially for those of us who were raised in an era that served girl power with a heaping side of cleavage.

But Monáe is giving us a choice: to cringe, because, well, insecurity is much more socially acceptable – or to throw up our hands like believers at a Baptist church and praise the fact that a woman is willing to be outspoken about her self-confidence.

Learn what Monae loves to wear on the next page…

But I wonder why she can’t challenge people musically while showing some skin. Are the two really mutually exclusive?

Is that not a form of puritanical judgment itself? Monáe seems tired by this line of questioning, though.

"It’s not that I never wear miniskirts," she explains.

"Freedom is like air to me. Not being able to make my own decisions would suffocate me. I don’t think that a woman should be treated ‘less than’ because she has on less clothes or more clothes. But I do understand that we’re human and we can get distracted."

The crew on set at the photo shoot is getting edgy. We’ve been here for hours without so much as a click of the camera.

Monáe’s signature coif has had more loving care than a Park Avenue poodle, and she’s considered the wardrobe meticulously.

We’re jittery when she steps on set; she’s got a plane to catch, and the clock is ticking. Then the flash goes off, and I’m dumbstruck.

She’s that electric performer again – one who knows an audience when she sees one.

The shoot is over just as quickly as it started, and everyone is a little breathless.

With a tip of the hat, Monáe is gone – back to Atlanta to finish her album and motivate a generation. But maybe not in that order.