The chart-topping country singer talks about her decision to be the first-ever American country music artist to come out as gay, as well as her love for custom-made boots, Jann Arden and Diane von Furstenberg. 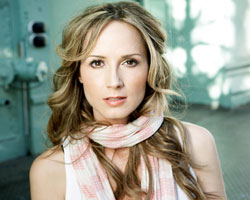 Coming out as homosexual may not seem like a huge deal in Canada, where we have same-sex marriage and k.d. lang singing at the Olympics. But in the world of mainstream country music—God-fearing, flag-waving Nashville, Tennessee—it’s a very different story.

Just ask Chely Wright, the chart-topping Kansas-born country singer who has finally broken her silence by admitting that she is gay. The occasion is the release of Lifted Off the Ground, an album of wrenching songs about Wright’s struggles with relationships and self- acceptance, and Like Me, a confessional book in which she details her secretive life and why she finally decided to come out.

“I always knew I had to hide the truth to achieve my dream,” she says. “Because as far as I knew, growing up in Kansas and making my way to Nashville and getting my record deals, there’d never been an openly gay mainstream country music singer. And I just knew I couldn’t be the first. But I would make myself little deals, like: ‘When I have a hit record I’m going to get up on stage and say, I’m gay.’ And then when I got a number one record [‘Single White Female’], I looked around and I had 30 people working for me and I thought, am I really going to do that to these people? I didn’t want to give up my dream, and that’s the trap I found myself in.”

What changed was a combination of forces that included the end of a relationship, a breakdown that led Wright to the brink of suicide and a subsequent creative outpouring that saw her feverishly writing songs and sending them to singer-songwriter-producer Rodney Crowell for feedback. “He said, ‘You need to let me make this record, because I’m emotionally invested in these songs. Very seldom does a producer come across an artist who is giving in to such creative growth, and you’re really doing something here,’” she recalls.

Now, Wright—who was raised a Christian and still retains her faith—is trying to make life easier for other closeted gay people by working with Faith In America, a non-profit organization that, as she says, “addresses the damage that has been done to young people in the name of God.

Chely’s future, her necessities, and her favourite designers on the next page…

“The problem is that people are not taking religious fundamentalism to task. And until we do that, until we start going into churches and telling people to stop telling 14-year-olds that they’re damaged goods, we’re going to continue to have social problems. It’s awful.”

So far, it’s too early to know if Wright’s fears that her announcement will mark the end of her run as a top-selling major touring artist are justified. But even if they are, she’s hoping that other avenues might open up. “I love my country music fanbase and I’ll always been a country singer,” she says. “But I started a slight departure to more of an Americana/adult alternative format on my last record, so maybe I’ll have a new fanbase there. And I’d like to do a Canadian tour with Jann Arden. I love her music, and she’ll sell out anyway so the pressure is off me! But whatever happens, at least I’ll be in truth. I’m kind of on a magical path right now. It’s a huge relief; I feel so liberated.”

Black Book: What are some of Chely’s necessities?

“On tour, I need my hair extensions, my beanbag pillow, a gym in the hotel so I can stay limber and decent vegetarian meals.”

“In terms of fashion, I’ve got some amazing handmade boots from Italy. I’m not into western boots. I’ve got weird feet—they’re size 11 and freakishly narrow—so I get them custom made. I’m usually a jeans and T- shirts girl, but I know when to hire the right people to buy clothes for me. I like Chloe, Oscar de la Renta, Jean Paul Gaultier and Diane von Furstenberg, my favourite dressmaker. I want her to call me!”