Colour your world with Joss Stone 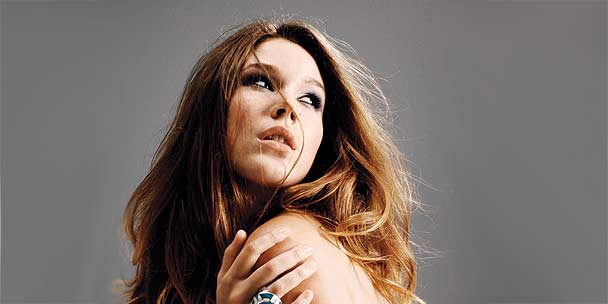 When Joss Stone giggles, her nose crinkles cutely and her almond-shaped eyes curl up at the corners. Despite her dazzling career as an international superstar, she’s nonetheless an endearingly down-to-earth young woman. The 22-year-old English soul sensation brings her old-school-R&B, honey-on-velvet styling to her newest (and fourth) album,
Colour Me Free! The album, which was recorded on a whim, brims with funky hooks that hit hard and lines that pulse with raw emotion. “One day I woke up and decided to make an album with my two mates Jonathan and Conner [who collaborated on Stone’s 2004
Mind Body & Soul],” she explains. “Within a couple of days we got the musicians in, and for about a week we wrote and recorded songs.”

Stone’s relationships with the opposite sex often (but not always) inform her compelling lyrics. “I haven’t had a boyfriend for a very long time, but I have fallen in and out of love since then, as young chicks do,” she admits. “I don’t know if it was always real love…it couldn’t possibly have been!” The inspiration for her first single, “Free Me,” had nothing to do with any man. “It’s about being independent,” she explains. “It’s about putting a smile on your face and not worrying about what anyone thinks.”


Get your daily celebrity gossip fix!

Check out our interview with Lily Allen — you won’t believe what she says!

Stone was raised in Devon, England. Despite often finding herself in Los Angeles for work commitments, she’s adamant that Devon is her base. When she’s not on the road, a perfect day involves getting up early (a rare event because she usually works until the wee hours of the morning), having a coffee and taking her dog for a walk. “Then I like to have a laugh with my mom, paint a picture, write a song, have a nice dinner and then head to bed. Man, that sounds boring,” she says, laughing. “But I love relaxing.” Stone’s favourite indulgence is equally earthbound: beer. “It may not be the healthiest thing, but I’m really into ales — pale ales. It’s great to have a cold one on a hot summer’s day.”Although Stone famously appears onstage barefoot, she adores shopping for (you guessed it) shoes! “It’s weird,” she says. “I don’t really wear shoes because they hurt my feet, but I have a great shoe collection.  I also love shopping for underwear. But when I have to shop for something in particular, I hate shopping. I don’t like the pressure.”

Aside from her music ventures, Stone has appeared on a number of television shows, including
The Tudors, in which she plays Henry VIII’s fourth wife, Anne of Cleves. She also donates her time to philanthropic ventures, from global warming to PETA to AIDS to helping people in Darfur. To cope with the demands of her busy life, she has adopted a Zenlike attitude: “I just feel good about everything, and I’ve let go of outcomes. I feel like a free spirit; I’m just being myself and loving life.”

Read more
How well do you know Lauren Conrad?
Hot celebrity couples
Decades of "it" couples