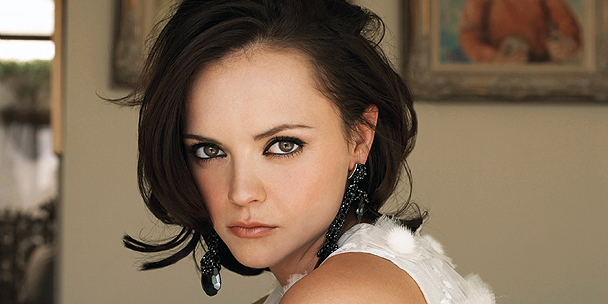 There is no nudity, sex, screaming or nervous breakdowns in two of Christina Ricci’s upcoming films, Penelope and Speed Racer. In fact, both movies are being touted as feel-good fare. It’s an unexpected cinematic twist for the 28-year-old actress, who is known for playing dark, cynical and often seriously disturbed characters — including her recent turn as a drug-addled nymphomaniac in Black Snake Moan.

“My agent held on to the script for Penelope for a few weeks before showing it to me,” recalls Ricci. “It came with a mock-up photo of me sporting a pig’s nose, and she was afraid I would be offended. But I was like, ‘Why would I be offended?’ I have always wanted to be in a fairy tale.”

A perfect fairy-tale
In this modern fable, Ricci plays an aristocratic young woman who was born with the face of a pig — the result of a nasty curse that dates back five generations when a relative knocked up a servant girl and failed to do the honourable thing. Her mother — a mean-spirited witch — cast a spell that the next girl born into the family would be burdened with a porcine proboscis. After five decades of boys, the pig-faced Penelope finally arrives on the scene. She is cloistered in her family home, but if she ever hopes to break the curse she must find a blueblood who doesn’t mind marrying a girl with an unsightly pink snout. Despite her parents’ frantic efforts to find a suitable and willing mate, Penelope remains single and isolated until she breaks free — literally and emotionally.

Ricci’s struggles as a teen
“I love Penelope’s strength,” explains Ricci. “Everyone tells her that she has this major limitation, but she still finds happiness in the world and moves on. She overcomes intense self-loathing to find true joy.” It was an emotional challenge that resonated with Ricci, who struggled with drinking, depression and her weight when she was a teen. “When I was a fat 15-year-old, I didn’t want to leave the house,” she says. “I covered myself from head to toe. I remember how that felt — it was awful. I still tend to be a little too vain, and Penelope is a really good reminder to me and to everyone that there is no need to be so self-obsessed.”

Ricci’s success
Ricci gleaned other valuable life lessons from the set of Speed Racer, which is directed by Andy and Larry Wachowski of The Matrix fame. The movie is based on a 1960s animated Japanese series about a race car driver who avenges his brother’s death, fights corruption in the sport and goes on to win a coveted race. Ricci plays his loyal gal pal Trixie. “It’s a very human, emotional story,” she says. “It’s about being true to yourself and not selling out, because integrity is the most important quality you can have.” It’s certainly a valuable message for anyone but especially someone trying to navigate the competitive and, at times, soul-destroying Hollywood scene. It wasn’t just the storyline that inspired Ricci to examine her life and goals; she credits heart-to-heart discussions with the Wachowski brothers with giving her the courage to face her long-standing fear of failure and embrace her true desire to be a star.

“It’s not un-cool to want to succeed,” says Ricci. “Before, I didn’t want to admit that I wanted something just in case I didn’t get it. If you’re apathetic about something, you can’t be hurt. I realized that what was holding me back was fear, and I was like, ‘What am I afraid of?’ It wasn’t success; it was failure. But you’ll never succeed if you don’t risk failing. I’m ready to admit to myself that I want to be successful, and I’m not embarrassed to say it.”

Christina’s favourites
• Theme songs “‘Silver Springs’ — it’s my ‘Eye of the Tiger.’ I hum it just before I hit the red carpet. My second is ‘Make Your Own Kind of Music’ by Mama Cass Elliot. I have a techno version and I’m obsessed with it!”

• Style icon “I adore Audrey Hepburn — I love the way she dressed.”