Bella Thorne shakes it up 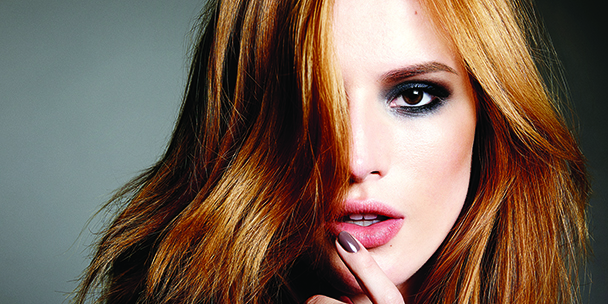 When I arrive at Bella Thorne’s gated Encino family home in Los Angeles, her friend answers the door (I later learn he’s part of her tight-knit “crew” of friends) and two dogs—one very large wolf-husky mix (Voodoo) and one very small teacup Havanese (Kingston)—come barrelling out. Before I have time to ask him his name, he disappears to fetch Thorne as Voodoo and Kingston jump enthusiastically around my feet.

READ MORE: Behind the scenes on our live cover with Bella Thorne

Moments later Thorne appears, a large Jamba Juice in hand, barefaced and dressed in a simple black jersey dress and grey-and-pink fuzzy robe. She gives me a big hug and immediately apologizes for her appearance. She had a late night with friends, she says, an evening that included a Domino’s pizza party/fight while they watched a UFC match.

We eventually settle at the kitchen table, which is covered with remnants of the food fight. Voodoo lies down at my feet (I’ve been informed he thinks he’s a cat), while Kingston bounces between my chair and the one next to me, eagerly awaiting pats.

I’m instantly struck by how real this all feels—not “Hollywood real” but hanging-at-your-friend’s-house-watching-Netflix real. Thorne’s older brother Remy and her best friend, whom she affectionately calls “Bella P.,” arrive later and join the conversation, chatting about Hades, their new husky puppy (who spends the rest of the interview lying beside Thorne), and what their plans are for the day. It’s all so easy—that is until Remy spots my recorder and says, “Wait, this is being recorded?”

Thorne’s unapologetic quest for realness has garnered her almost 10 million diehard fans who follow her every move on Twitter, Instagram and Snapchat. Whether it’s movie nights with friends, baking at home with her mom or even during our live cover shoot, this 17-year-old actress isn’t interested in manufacturing some imagined version of perfection.

READ MORE: 7 things you need to know about Bella Thorne

In typical Thorne style, she looks me right in the eye and says: “I’m not a basic B, and I don’t just post pretty selfies. But when I post things that are really ugly back to back—I did these car singing videos that are just horrendous—then, yeah, I’ll post that selfie, just to remind people that I’m still attractive.” Seven minutes in and we can’t stop laughing. It’s easy to see why so many are obsessed with her.

Thorne says she’s thankful to be able to connect with her fans on such a personal level, but the Disney Channel teen star admits that she has her share of haters. “Because I’m from ‘the Channel,’ everyone expects me to be overly innocent, but I’m very upfront with my teenage fans. They know who I am; I’m just like them,” she says. “It’s really sad that right now everything you say has to be rude, racist or sexist. Usually I’m just making fun of myself—that’s why I opened my public Snapchat. Now I can post what I want without people getting so butt-hurt about it.”

Thorne’s online followers aren’t the only ones who are critical of her life—or fashion choices. “I hate the way the media says ‘We just want to see the real Bella; we just want her to be a regu­lar teenager,’” she says. “Well, you’re not letting me be that by calling me a slut because I’m wearing high-waisted shorts; you’re not letting me when you speculate about what I’m doing at Coachella. Teenagers go to Coachella; teenagers sometimes wear revealing clothes—it’s part of growing up and finding out who you are.”

At this point, two cats arrive at the table: Louie (she calls him her son: “Oh, my gosh, look how cute my son is!”) and May, who stomps across my notepad before leaping off the table. Even with all this realness, I ask her if she’s finding it hard to maintain a sense of balance between what she chooses to share with fans and what she would like to keep private. “Everyone goes through phases, and my phase right now is ‘I just don’t give a….’” She pauses before mouthing the word “fuck.” “What I’m about just doesn’t work for some people. But if you don’t like me, I really don’t care.”

READ MORE: 15 Instagrams that prove how cool Bella Thorne is

Thorne also doesn’t care if people take issue with some of the parts she has taken on this year, including playing a mean girl in The DUFF and a heroin-addicted dancer in Perfect High (slated for release in June). “Honestly, I know some people are going to trash me,” she says. “But I’m trying to show everyone what is happening in the world. If you close your eyes and think that bullying and drug abuse are not issues for your kids or your best friend—you’re wrong. I want to show that good people do bad things too. I know I’m going to get a bunch of hate, but let them hate. I’m not a bad person for choosing a role that shows people how life is.”

Thorne has often spoken of her own experience with being bullied when she was a young girl, so it’s rather ironic that she was cast to play the character who torments the DUFF (a.k.a. Designated Ugly Fat Friend) in the film. “I stopped going to regular school in third grade and have been home-schooled ever since,” she recalls. “My first language is Spanish, but I had to drop it to learn English. People just called me ‘the pretty dumb girl,’ and I would literally walk home crying every day. When I was offered the role in The DUFF, I actually wasn’t going to take it because I didn’t want to be typecast as ‘the mean girl.’ But The DUFF is such a great story, and I love the message behind it.”

The subject matter in Perfect High, which was filmed on location in Victoria, B.C., also resonated deeply with Thorne. “You’re not a bad person because you get locked into something stupid,” she says. “My character gets caught up in this world because of something she loves [dancing] more than anything.” She says she was nervous about taking on the role because she didn’t know anything about drugs and was worried the film wouldn’t be authentic. “Playing someone who is addicted and being in those scenes was surreal. It made me feel like I was hungry for…something,” she says and then pauses. “That is scary.”

She credits the director, Vanessa Parise, with helping her understand the emotions her character feels. She encouraged Thorne to explore some of the pain she was hiding deep down. “Some directors say ‘Pretend like someone just gave you a great sports car!’ And you’re like, ‘Has anyone ever given you a great sports car? Because I’m not really sure what that feels like,’” she says. “We talked to a lot of heroin users; I even Skyped with a few. In the end, it was actually nice to feel that pain and what these characters are caught up in.”

Thorne undoubtedly drew upon her own experience with loss—her father was killed in a car accident when she was 10. She is clearly still grappling with this profound grief, a subject she explores in her three-part book series for Random House. (The first, Autumn Falls, was released late last year.) The story centres around Autumn, a teenage redhead who is dealing with the death of her father. Autumn suffers from dyslexia, as does Thorne. Seventeen magazine describes Autumn as a “lovable klutz,” but Thorne takes a different view. “Actually, people ask me why I made Autumn so unlikeable in some parts,” she says. “But if you’ve never felt that kind of pain, you don’t know what it’s like. Like I said, there is darkness and light in everyone; if you don’t like Autumn, you don’t like yourself. Because one day you’ll get to that dark place, and it’s not easy.”

Autumn does find happiness again—with the help of a magic journal that grants any wish she writes in it. It’s a touch of whimsical realism that captures Thorne’s own optimistic outlook. “Life is magical and special,” she exclaims. “You may not believe that a book can grant you wishes, but I believe that if you want something strong enough, it can happen.”

READ MORE:
Behind the scenes on our live cover shoot with Bella Thorne
15 Instagrams that prove how cool Bella Thorne is
6 degrees of Bella Thorne