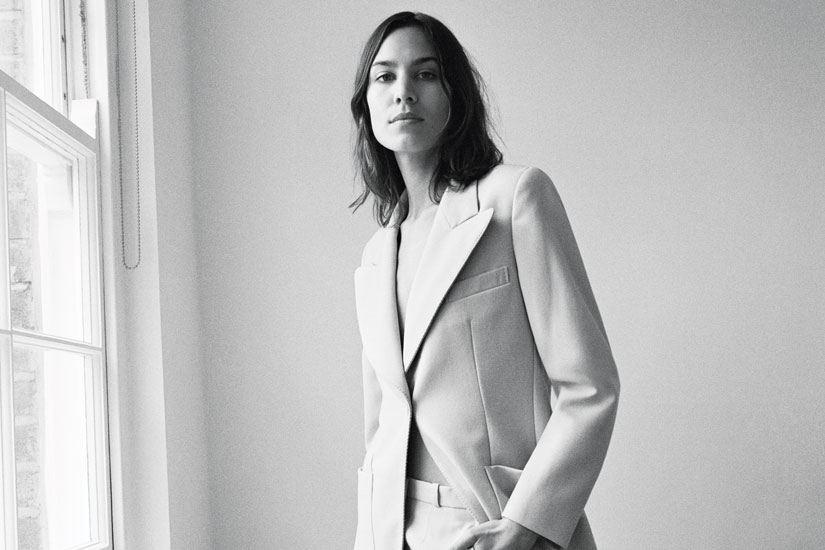 In a way, sitting in Paris with Alexa Chung, surrounded by racks of clothes from the first season of her eponymous clothing line, feels inevitable to me. Actually, this moment – Chung on a couch, one leg tucked under the other, wearing an oversized sweater, her hair slightly wet, stirring sugar into an espresso as she expounds on the perils of wide-legged pants – feels like it should have happened years ago. Long before the Insta-girls, there was British-born Chung, a model turned TV host turned fashion writer turned style icon, her vibe a magical combination of “I wanna be her” and irreverence that made it possible for her to write a memoir called It, a tongue-in-cheek exploration of the career she has built being, well, Alexa Chung.

The 33-year-old has dabbled with design before, lending her unique stamp to sellout collabs with the likes of Marks & Spencer and AG Jeans. Which might be why this collection, when previewed during fall/winter 2017 Paris Fashion Week, wasn’t particularly surprising to anyone who has a nodding acquaintance with Chung’s look. Tomboy pretty? Yes. A fun spin on vintage classics, like trench coats and menswear? Absolutely. Chock full of staples for those who like their basics with an eccentric twist? Yep.

“It’s not vastly different from my personal aesthetic,” concedes Chung, who in person is razor-sharp if, perhaps, a little inscrutable. “This first collection is more instinctive. It came out of working at my managing director’s kitchen in East London and pulling together a mood board of images of all the things I’m usually attracted to.” (On that mood board? George Harrison, “snappy women dressers” and Rihanna, whom Chung had in mind when she was designing a certain lilac plastic dress.) The first collection is available in Canada now via online retailer Ssense, and a second will come out this fall, Chung hinting at an “’80s Tatler meets Wuthering Heights” inspiration for that follow-up.

And, yes, she agrees that finally seeing her own name on a clothing label (no Alexa x So-and-so in sight) does feel like the natural unfolding of destiny – what she describes as “a dream emerging, something I’d desired for a long time.” That doesn’t mean the whole endeavour has been a breeze, no matter how nonchalant Chung looks now, peeling a banana as we chat in this lofty showroom space. “I feel heavy with responsibility!” she says. “I’ve shrunk. I used to be five foot 10. Now I’m crawling around crumbling. You know, with great power comes great responsibility.”

Lookbook image from the debut collection of Alexa Chung.

There’s no one to hide behind this time.

“I feel much more vulnerable and exposed and much more judged. Like yesterday: Twelve people came by literally to judge. But I’m strong enough not to let my insecurities or weird neuroses get in the way of the company.”

“I’m sure there are smart tweaks I could make, like ‘Wear red, sit in the middle of the frame, have more famous people in the frame.’ That’s not really my jam. I don’t like a social environment where it’s just a countdown to the next selfie to prove you were next to whomever.”

We’ve all been to those parties that look way better on Insta than they were in real life.

“As my followers have grown, I’ve questioned whether people really need to see things like me in my disgusting bathroom doing my makeup, but then I’m like, ‘Well, I’ve posted it before.’ The only thing I don’t put up there are boys I’m in a relationship with. Here’s a top tip: I’m never fucking any man who’s on my Instagram.”

Is there some contribution to fashion that you’d like to be remembered for?

“The loafer. [Says with heavy irony] Thank God! No, it’s best not to think of oneself in those terms. You turn into a dickhead with that type of self-analysis.”

Do you have a sort of overarching life philosophy?

“Generally, I don’t worry too much about what people think of me. It might just be raging narcissism, but I’m not afraid. I do look back at what I’ve done and think ‘You risked not going to university and didn’t really think about it, and you moved to New York and headlined TV. That’s insane!’ But at the time, I was just like, ‘Bye, everyone! I’m off to save MTV! Be right back.’ And I mean right back because it didn’t last.”

How did you move past a disappointment like that?

“Well, because of the raging narcissism, I just thought they didn’t get me. I’m a genius! [Laughs] But, no, I was really sad after that.”

“It was mainly because I worked so hard, not because I thought it was unjust. I was exhausted. I left all my friends. I lived in this rando country for ages. I always thought that if you work really hard, it all works out, but sometimes it doesn’t.”

Speaking of failure, has Alexa Chung ever had a fashion faux pas?

“I live in fear of the white powder face, but that hasn’t happened yet. I’ll probably end up tripping on my bellbottoms and that’s how I’ll die.”