A day in the life of celebrity Molly Parker

With a baby and three movies due this fall, it's a wild ride for Molly Parker! 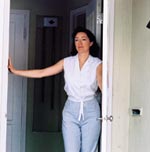 A five-months-pregnant Molly Parker was at the vet with her dog last June when her cellphone rang. Fishing the phone out of her bag, she saw it was David Milch, the executive producer of Deadwood, the HBO western series that Rolling Stone characterized as “John Wayne meets John Milton” and the drama on which Parker played lead character Alma Garret. “I have sad news,” said Milch. “We probably won’t be making the show anymore.” After weeks of speculation — and an evangelical “Save Deadwood” campaign by fans — HBO was putting its gutsy, Emmy- and Golden Globe-winning show out to pasture as the third season was about to air. The cancellation happened just as Parker and her husband, director Matt Bissonnette, were in the process of buying a new home. For the first time in her almost-20-year career, Parker found herself unemployed. “I was quite devastated. I’d never done TV and didn’t want to, but it turned out I enjoyed the security. As an actor, you usually live your life with faith.” But faith — and fierce talent — had already brought the girl from Maple Ridge, B.C., this far.

At 24, she earned a Genie for Best Actress for her performance as a necrophiliac in Lynne Stopkewich’s film Kissed. You might say that Parker has made a career of flirting with the dark side: she has played the calculating girlfriend of a U.S. congressional candidate, a drug-addicted single mom, a motel clerk who prostitutes herself and a lap dancer hired to spend the weekend in Las Vegas with a computer geek. On the verge of her most challenging role to date — motherhood — and three new fall movies (The Wicker Man, Hollywoodland and Who Loves the Sun), Parker spoke with ELLE about unexpected endings and exciting beginnings.

Have you come to terms with the end of Deadwood?
“As an actor, I’m at the mercy of the business; I’ve chosen something where I’m beholden to the people with the money. It’s a very expensive show to make: about $4.5 million per episode, I’m told.”

Would you do television again?
“Oh, not for a long time! You know, this project was rare. I haven’t seen a lot of shows on TV in the last several years where I think ‘I’d like to have worked on that.’”

When the show was on hiatus last summer, you worked on several movies that are about to hit theatres. What can you tell us about them?
“Well, I worked on Hollywoodland, a noirish film set in the ’50s. Adrien Brody plays a private detective investigating the death of George Reeves — the actor who played the original Superman. Ben Affleck’s in the role of George. I’m Adrien’s estranged wife, and we have a young son who’s very affected by the death of ‘Superman,’ so we fight — a lot!”

What was your favourite part about working on that film?
“It was so great to wear those clothes, which is true of all period work. I have a more difficult time feeling good about a character in modern clothes, like jeans and a T-shirt, because it’s tough to define that character. In general, costumes are the first thing in life that let other people know who we are. They indicate who the person is without saying anything.”

What about The Wicker Man?
“It’s this crazy movie directed by Neil LaBute, and it’s a remake of a ’60s British cult film, where a policeman, played by Nicolas Cage, comes to an island to investigate the murder of one of its inhabitants. He finds that it’s a very mysterious place — basically a matriarchal pagan community. I play a sexy, strange teacher who gives him some clues. The movie’s quite outrageous — I don’t want to give anything away, but the word ‘sacrifice’ could be thrown in!”

You’re also in a movie called Who Loves the Sun, written and directed by your husband. What was it like working with him?
“It’s a very sweet and funny movie, and it made me feel incredibly joyful to watch him create something out of nothing. But it was also somewhat debilitating as an actor because I’d read so many drafts and I knew who these characters had been in previous versions.”

Do you think being a mother will affect the types of roles you choose?
“Well, I suspect it will change absolutely everything. I’ve always tried to be conscious of how I represent women in my work. They don’t have to be good or strong women, but they have to be complex. I’ve also tried not to do work that’s degrading to women, even though the characters have been in degrading circumstances. The filmmaker’s point of view is what is most important to me when I’m choosing roles.”

In a previous interview with ELLE Canada, you said you’d grown “comfortable with being uncomfortable” in L.A. Where do you feel happiest and most comfortable?
“I’ve lived in L.A. for six years and I really do like it now, but British Columbia is my home. The landscape you grow up in speaks to you in a way that nowhere else does. It’s so green there; I miss that. It’s very brown in L.A.”

How are your 30s different from your 20s?
“They’re so much better. I’m doing what I want and what I love.”