From former American Idol Kelly Clarkson's new disc to some cool country tunes by Big and Rich, ELLE has the reviews. 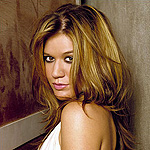 I don’t know Kelly Clarkson personally, but I’m going to assume that since her last album, she’s been doing a bit of dating. The reason I can assume this is because every single one of her songs on her latest album, My December, involves broken hearts, happy hearts, indifferent hearts……you get the picture.

I like Kelly Clarkson, I really do. That is why what I’m about to say is so hard. My December is ok. It’s as simple as that. The reason it gets an “O.K” instead of a “sucks” is mainly because of two songs, . Both songs have a slower tempo that showcase Clarkson’s amazing vocal range.

Kelly Clarkson is clearly in the middle of some kind of early twenties crisis. She’s been in the news for fighting with Clive Davis and subsequently firing her old management. Perhaps this has something to do with this mediocre album. There’s no denying that Kelly Clarkson has an outstanding voice. This is why her new management should encourage her to try to take her next album back to a pop rock, or even adult contemporary direction. You see, the main problem with this album is the fact that Kelly Clarkson attempts rock music. It’s like when McDonald’s tried to sell pizza, the two just don’t go together.

However, despite the controversy surrounding My December, the album debuted at #2 in the U.S with 291,000 albums sold. As long as she’s selling records the record label should remain happy but as for her fans, Clarkson should seriously think about picking it up a notch for the next attempt.

My December, by Kelly Clarkson gets a “meh.”

Between Raising Hell and Amazing Grace
If you’re a rock fan, you’ll like this record. If you’re a country fan you’ll like it even more and if you’re a pop fan, you’ll like it the most. That’s the thing about Big Kenny and John Rich. They have succeeded in amalgamating genres of music under the umbrella of “new country”. I think the most obvious proof of this is track #11, Please Man featuring former Fugee Wyclef Jean. Either Wyclef is a big fan, or he’s a smart business man as Big and Rich’s latest release Between Raising Hell and Amazing Grace has already hit #1 on the U.S Country charts and #6 on U.S Billboard chart. This album has everything you expect from Big and Rich. It’s fun, silly, sometimes sad, often cheesy and certainly entertaining. The first half of the album is more downtempo but by song #8 (Radio) they pick it up and the rest of the album is pretty rockin’. However, if you totally hate country, maybe give it a miss. There’s no denying that they are definitely a country duo. With lines like you know you’re listening to country music.

Forget the runway! We roam Canada to check out your fall street style!