A timely talk with author and font of feminist wisdom Caitlin Moran. 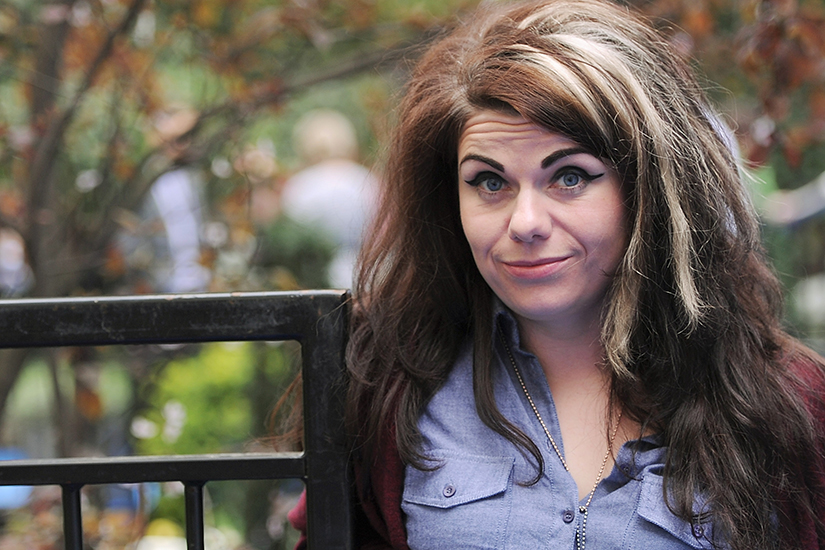 If you have ever wondered what it would be like to go over to Caitlin Moran’s house (admit it: you’ve thought about this while clutching your dog-eared, tear-stained and heavily highlighted copy of her feminist bestseller How to Be a Woman), here’s how it goes:

The 41-year-old will pull you in from the cold London night with a hug and a smacking kiss on the cheek and usher you into the kitchen of her comfortably cluttered townhouse.

The columnist, screenwriter and self-proclaimed “love child of Margaret Thatcher and Courtney Love” will somehow magically intuit how you like your tea and then make you a cuppa, answer the door three times as her husband and daughters arrive home, throw some potatoes in the Aga stove and find you a charger for your phone. All the while, she’ll make you feel so at ease that you pour out the woes of your day while she goes outside to get you the extension cord (long story) that she herself uses when she’s out in the garden writing/chain-smoking/plotting to change the world.

And that’s the thing: While the scene is all cozy domesticity, the conversation we had with Moran, on the occasion of the release of her new collected works, Moranifesto, was a radical, burningly necessary one. Women living in a post-Donald Trump-elected world, grab a glass of wine (or, you know, the whole bottle, like Moran—don’t forget the ice cubes) and feast your hope-hungry hearts on this: We asked Moran, after 40 minutes of wide-ranging conversation, if she believes that, ultimately, the future could be better. She delivered the following soliloquy. We’re going to paste it to our mirrors and look at it every day from now on.

P.S. As you leave her house, Moran will order you an Uber, refuse to let you pay and then shout “Crush the patriarchy!” as you step into the night.

“You can’t afford to be pessimistic. If everything is shit, you can’t wallow in it and go ‘Well, everything is doomed.’ No! Being pessimistic is a luxury that we cannot afford. If you started complaining about something three minutes ago, two minutes ago you should have started doing something about it. This is the best time ever to be alive, whoever you are, and we have infinitely more resources than we’ve ever had.

“I know 2016 just looks like a massive anus…. Historians will be plodding through the early 21st century and when they come to 2016, the entire screen will burst into flames. I love this theory that David Bowie was actually what held the fabric of the universe together and since he died, it has literally gone tits up. Like Prince died, then Brexit happened, then Trump…and unless we can dig the fucker [Bowie] up and stick a lot of electricity into him, we’re all doomed.

“But things change so quickly. Look at the cultural revolution in the ’60s. In two or three years, it went from being an incredibly repressed society with segregation to this mad psychedelic thing and everybody working with one another and this upswell of money suddenly shifting from the establishment to these weird hippie kids who then put it into business, like Richard Branson’s Virgin, that completely revolutionized things.

“Always believe you can change the world even if it’s a tiny bit, because every tiny bit that changed needed somebody to change it. It is that simple. Even if you do one tiny thing in your life, that’s a successful life, man. Even if you go through your entire life never hurting anyone, that’s a successful life. And if you’ve got 20 people in the world who change 10 people’s lives, that’s massive. Things can change in the blink of a fucking eye.

“As humans, we take ashes and make them into things. At the point where we’re on the brink, we turn around and say something incredible or do something heroic or we fall in love or invent something. So I have to believe that 2017 will be the best year ever. We’ve never had more ashes and rubble and hopelessness. All the asshats have had their say, and hopefully on New Year’s Eve, they’ll just collapse, exhausted, and go ‘This was the year we ruled! We did stuff we didn’t even believe we could do, we were unbelievably stupid and evil and now we must rest!’

“Then on New Year’s Day, all the lovely, clever and reasonable people will stand up and go ‘Right, there’s a big cleanup job to be done here; you get the broom, I’ll get the mop and let’s start making 2017 better. I’ve got an idea, and it just might work.’”