Beauty influencers reflect on the state of the industry 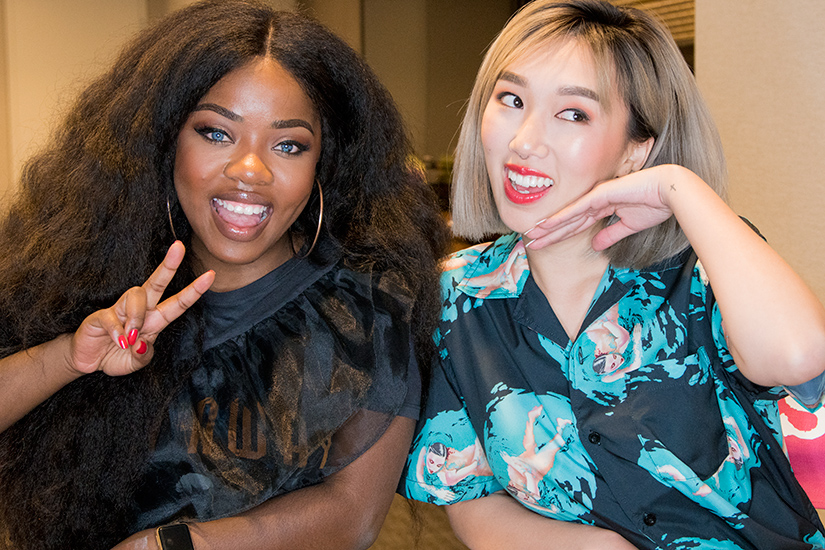 “Ipsy is a beauty community that is hyper-focused on personalization and discovering beauty,” Phan told us at the event. “It helps you rediscover beauty through all sorts of platforms, from the monthly product subscription bags we send out to tutorials [by Ipsy creators] to events like Generation Beauty. We are constantly encouraging people to immerse themselves in the beauty world.”

It’s an interesting time in the beauty industry, as the role of influencers—like the Ipsy creators—changes and evolves. ELLE Canada caught up with Phan, as well as creators Karen Yeung, Cydnee Black and Christen Dominique who headlined the event, to talk social strategy, the role of influencers (and if they believe that term reflects what they do) and their favourite beauty products.

If you had to describe what you do to someone who is unfamiliar with this industry, what would you say?

Michelle: I just tell people I am a creator or an entrepreneur, which is essentially the same thing. An entrepreneur creates an idea that is a solution in an industry that they want to resolve. I wanted to disrupt beauty. Beauty has been the same for so long, the same format, the same way of marketing and buying in stores. When I was creating these tutorials ten years ago I realized how quickly things were going to change with videos and having accessibility with education for makeup. Back then, if you wanted to learn makeup, you would have to read books or pay for seminars. Now you don’t even second guess it, if you want to learn beauty, you just go online.

How did you see this flaw in the industry and know it was a space you wanted to fill?

Michelle: Growing up, I felt like there was not a lot of diversity in American media. I didn’t see my face on the front cover [of magazines], I didn’t recognize myself in Hollywood movies. I think that is a big factor in why I gained popularity. I didn’t become famous because of my skills, but because lots of Asian people could relate to me. That’s also what is so special about influencers, they are democratically elected to become famous. I personally think there is so much nepotism in the industry, so many people are famous because of their network, because they are so-and-so’s daughter. With the internet, fame is more organic.

What’s next for the online beauty community?

Michelle: Industries need to evolve and they need to evolve fast. But it’s hard–they can’t evolve fast enough because they don’t know what they are growing into. We are on the brink of a huge disruption, think of the changes we can make as millennials and really disrupt. Not just beauty, think about agriculture, think about energy, music, fashion. It’s really exciting. We are going to start seeing major industries falling and new industries rising.

If someone is thinking about creating beauty tutorials but is nervous, what are some initial steps they can take?

Michelle: Practice. Film yourself, do live streaming so that you know how to speak. I wasn’t really good at even speaking when I started out, I was really shy and introverted, so I would subtitle everything. Then I really started to speak more and build my eloquence. Make a video that is just 30 seconds long to start! And don’t focus so much on numbers. If you go after numbers that’s like going after a moving target, you are chasing being trendy and it becomes a destructive cycle. Don’t follow what everyone else is doing, break the mould and try something new.

What’s next for you as an entrepreneur?

Michelle: I am going to be focusing more on actually creating my own beauty products, but also spending more time with my friends and family. For ten years all I did was vlogging and editing and I never really had a chance to enjoy the moment. I remember Halloween would come around, and I wouldn’t be able to go enjoy a party because I was at home editing videos. It’s such a lifestyle—it is fun but it isn’t sustainable. You focus so much on the industry that your personal life kind of gets shoved into the corner. It’s really easy to get caught up in the money and the fame and all of that.

Michelle: Dude, my eyeliner. My matte gel eyeliner. Have you seen it? I know it isn’t exciting, black eyeliner, but if you think about it, it is an essential.

What inspired you to start creating beauty tutorials?

Christen: My friends! They were always asking me to do their makeup, so I started making these little tutorials to help them. This was back in 2009, I did one video and then waited forever, I wasn’t doing it consistently until like 2013. I never anticipated my videos would impact this many people.

What is your personal beauty aesthetic?

Christen: Everyday glam. I am always wearing lashes! Growing up, I was really teased about the way I looked. I had lots of hyperpigmentation and darkness under my eyes. My parents never let me wear makeup, I had to sneak it. I remember I found this yellow colour corrector and I wore it to school one day. It gave me confidence and I noticed it changed the way I felt about myself. I want to help others feel empowered through beauty and more confident in themselves.

What would be your advice for people who want their own YouTube channel?

Christen: I feel like so many people want to start their own YouTube channel because they are like, ‘Omg I am going to get so much free makeup.’ But for me, it was always a passion project. [Makeup was] always something I loved and that is really important. But other than that, I would say get in front of the camera, and mess up a lot until you find yourself! There is no secret to it. There is an audience for everyone, so don’t doubt yourself.

Christen: Tarte Shape Tape Contour Concealer! Concealer is everything to me and that stuff doesn’t budge, it doesn’t crease and it is full coverage. I love it.

There are so many buzzwords that get thrown around when it comes to describing what you guys do: influencer, YouTuber, blogger, vlogger. How do you describe what you do?

Karen: I like to say that I am a creator, that’s what I always wanted to be. When I was in college I wanted to be a creative director, and I identify as that through the creation of my own videos. I also have a passion for fashion and am working on starting my own clothing brand. Right now it is super small scale, but that’s definitely something I see for my future.

The industry is so saturated right now, it can be hard to stand out online. How do you differentiate yourselves?

Cydnee: I think it is easy to gain popularity on YouTube through super gimmicky click bait content, so I really try to stay away from that. I create authentic content and I think that is important to establish a true relationship with your fans. Sure, people will watch your videos if you do a full face of makeup with liquid lipsticks, but they won’t relate to you or stay with you longterm. Make content you believe in and you will attract people that will stay with you.

Karen: The industry is so saturated with beauty bloggers and creators, so when I started my channel four years ago, I knew I needed to differentiate myself. I really worked on my editing and storytelling. I like to watch 30 second ads to see storytelling methods of advertisers. For me, how I edit my videos is really important. I don’t sit in front of my camera and do a lot of talking, I try to elevate my videos with high production.

What would you say to someone who is thinking of starting their own channel?

Karen: You have to be really, really passionate about it and can’t give up.

Cydnee: I still swear by the Hourglass Vanish Seamless Finish Foundation Stick. I have been using it for months!

Karen: I’m really into the Too Faced Hangover 3-in-1 Replenishing Primer & Setting Spray. I spray it before I do my makeup and then I seal it right after. Last night I accidentally fell asleep with my makeup on and I woke up this morning and was like, ‘Woah I still look good!’ My makeup was still intact.