Why veins are the new fitness status symbol for men

Move over, abs. Here's how to master the new gold standard of fitness. 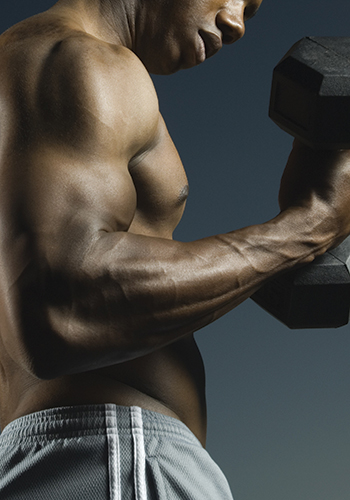 Blame it on Arnold Schwarzenegger. In the 1960s and ’70s, lean heroes such as Robert Redford, Paul Newman and Sidney Poitier embodied all-American fitspo with their chiselled yet attainable aesthetic. But in the post-Terminator era, with stars such as The Rock, Joe Manganiello and Georges St-Pierre becoming the new normal, not even jacked biceps and six-packs are enough. Veins are the new fitness status symbol.

“Everyone—Ryan Reynolds, Brad Pitt, Abercrombie models—is becoming more muscular and vascular,” says New York-based celebrity personal trainer and bodybuilder Andrew Ginsburg. “It seems to be in heavy demand right now. I train people all day long, and they’ll point to another guy working out and ask me ‘How do you get that vein?’”

READ MORE: 6 luxury gyms that could pass for nightclubs

The vein in question is the cephalic. That’s the one that runs up the forearm and biceps and through the shoulder, and it’s the most coveted because it best represents the taut aesthetic du jour. Calf veins are also popular. But the ones that will get you on everyone’s #mancrushMonday list are those in the lower abs. They’re almost impossible to obtain because that’s where most of men’s body fat is stored. Here’s your guide to “veinglory.”

STEP 1: PUT DOWN THE CHIPS AND BEER. “You can’t crunch your way to a six-pack; it all comes down to a lack of body fat,” says Matt Reid of Vancouver’s Studeo 55. The same goes for veins: The less fat on the body, the tighter skin looks and the more visible the veins. Ideally, body fat should be between six and 10 percent. (Most men have about 20 percent body fat. For a rough estimate, try using calipers, the old-school method of measuring fat by pinching skin folds. More accurate methods include hydrostatic (under­water) weighing or the futuristic air-displacement method, Bod Pod. Both can be found in health clinics across Canada.) Eating “clean” is the easiest way to trim down—it accounts for 80 to 90 percent of what the body looks like, according to Reid. Ginsburg recommends eating four meals a day, each consisting of:

Protein. Eat one gram of lean protein (such as chicken breast, tuna and sal­mon) per pound of body weight per day. Protein is key to your vein-popping blueprint because it’s what muscles are made of. (And, let’s be honest, what are veins without muscles?) One chicken breast has about 30 grams of protein.

Fats. Good fats, such as avocados and nuts, should make up about 20 percent of your meal.

Carbohydrates. On-again, off-again should describe your relationship with carbs on this quest. Eat 200 grams one day, drop to 100 grams the next, and then go down to 50 and up to 300 grams. This is known as “carb cycling,” and it will help you lose fat by forcing the body into a fat-burning state on low-carb days and then boost metab­olism on high-carb days. A week before your all-inclusive in Mexico, restrict carbs entirely to deflate muscles. Then, after a few days, chow down on some good carbs (oatmeal, sweet potatoes, brown rice) to boost glycogen stores in the muscles, making them—and veins—swell.

Water. It’s a vein’s best friend, so stay hydrated. “When muscle and carbohydrates bind with water, the muscle expands, [pushing on veins] so the veins pop out more,” says Ginsburg. But if your sodium is high, you will end up looking puffy because the body tries to maintain a certain ratio of water to sodium and will hold on to extra water to keep that ratio.

STEP 2: PUMP IRON. Forgive the Grade 12 bio lesson, but when you lift weights, blood overflows into capil­laries, releasing plasma fluid. This swells the muscle and pushes veins to the surface. No wonder male models work out before photo shoots.

Biceps and forearms: Reverse curls: Hold the barbell with an overhand grip, hands shoulder-width apart, and curl up to the shoulders. Try three sets—for the first set, do 15 reps using your lightest weight; for the second set, 12 reps with a heavier weight; for the third, 10 reps with an even heavier weight. You want to be able to feel like you can barely lift the last weight, says Reid.

Lower abs: Leg raises: Lie down at the edge of a flat bench and lift legs until they are perpendicular to the body. Slowly lower them to below the level of the bench. Do three sets of 25.

Calves: Calf raises: Standing up, lift heels off the ground; hold at the top for two seconds and then slowly release. Try three sets of 25.

STEP 3: KEEP UP THE CARDIO. Don’t be one of those guys who spends all his time grunting in the weight room—avoiding cardio won’t help your heart or your veins. Set aside at least 30 minutes four times a week after strength training to get your heart rate up. Strength training empties out the muscles’ glycogen stores (fuel that comes from carbs), which means that you’ll burn fat as energy during cardio. Afterwards, take advantage of the 30-minute “protein window” and eat a high-protein and high-carb meal to prevent muscle breakdown. Supplements such as nitric oxide (thought to boost post-workout recovery) are also growing in popularity, but Ginsburg isn’t convinced. “Supplements are a side dish; they’re not going to get it done,” he says. “It’s diet, cardiovascular exercise and weight training.”

READ MORE:
Another reason to quit drinking diet pop right now
Is this the new thigh gap?
5 tips to conquer any food craving