Not your average fragrance launch. 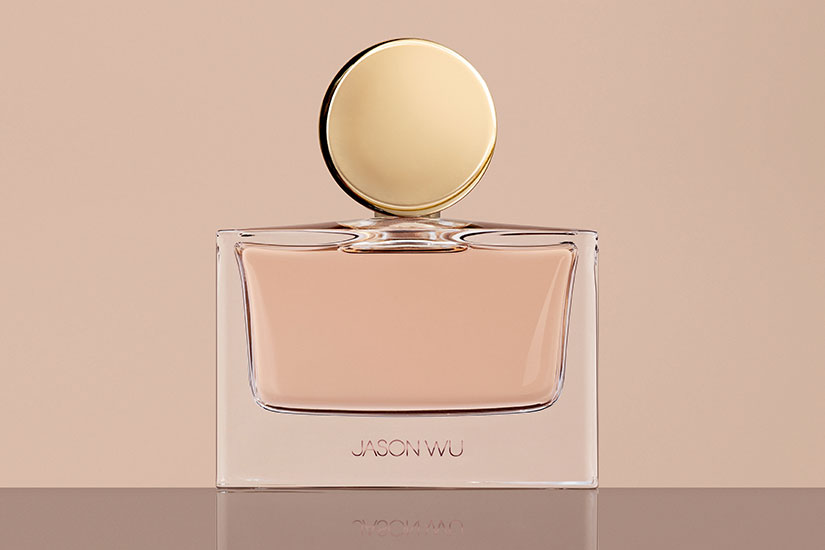 Sitting in Café Boulud at the Four Seasons hotel in Toronto, Jason Wu confirms that he did indeed dupe the entire fashion industry during his fall/winter 2017 show. The “Fragrance Box Clutch” he sent down the runway was not a clutch at all, but bottles of his not-yet-announced debut scent.  “I wanted to hint that I was coming out with a fragrance, but it wasn’t announced at the time,” says the designer. “So I was like, ‘Wouldn’t it be hilarious to hide it in the show in a way that hasn’t been done before?’” Wu created carrying cases for the fragrance, concealing everything but the cap. “I didn’t tell anybody!” says Wu, except for the models who carried them down the runway. “They were all full fragrance bottles. They were heavy!” he explains. “We just sent them down the runway stacked with other bags. It’s not practical, but it is a fun way to represent the obsession women have with their fragrances.” (The bags will not be available to purchase, but were given out to friends of the brand.)

Below, Wu expands on his non-traditional approach to the fragrance category and why a Jason Wu beauty line is only a matter of time.

On his relationship with scent:

“I’ve loved scent since I was little. I have always really related to it, and I don’t know why, but I think it is often the first thing you experience when you walk into a room: how an environment smells. I have candles everywhere. I use Cotton Poplin from Byredo, it is quite fresh. And you can’t go wrong with Diptyque. I always think of it like listening to music. I like having music on when I am working, and for me, having a candle burning sets the tone for a great environment [in a similar way]. The idea of an apothecary or the process of making a perfume, I always thought it was so beautiful. It’s something I’ve wanted to do for a long time.”

On choosing Lily Aldridge to front the fragrance campaign :

“I think the very essence [of the fragrance] is the Jason woman. She is very feminine, sophisticated and refined. There is a lightness and subtle elegance about this fragrance that I wanted to get across. My clothes have never been about being really loud or really avant-garde, they have always been about being very sophisticated. I concentrate on making women beautiful, it has always been my point of view. I thought Lily Aldridge was a great representation of this. She reminds me of Bianca Jagger meets Audrey Hepburn — beautiful features and so refined, but in the campaign you see her sort of in the buff, very natural. That is what I wanted, something that didn’t feel overly dressed up. Something that was close to the skin.”

On why the ’50s-era aesthetic is so appealing:

“Beauty in the ’50s was so important. It was such a regimen for women to get ready. Perfection and the art of dressing up was something I’ve always been attracted to. I call the ’50s the golden era of fashion because that’s when some of my favourite designers such as Charles James, Christian Dior and Saint Laurent all emerged. Their clothes have been so inspiring to me since I was little. It was a particularly beautiful era in extravagance and glamour and craftsmanship. Everything was made so beautifully.”

On the decision to work with an interior designer on the fragrance bottle:

“Andre Malone is a very good friend of mine, he designed my store in the US and he also designed my apartment. He has just such a great eye when it comes to objects of beauty. One thing about perfume is you see the bottle first before you smell it. So visually, it has to describe what the perfume smells like before you even experience it. I wanted something that came from a very authentic place that didn’t feel like we grabbed something off the shelf. I think interior designers and architects have such a good eye for material construction.  Andre, like me, is very attracted to mid-century [design] so we kind of speak the same language, and I wanted somebody that didn’t come from doing a thousand fragrance projects.”

The shape of the bottle is simple, but the construction of it is quite complex. I sent Andre to Italy to make the bottle, and he had the glass made completely the same thickness all the way around. There are no lines anywhere on the bottle because it is fire polished. It has a very simple sleek shape and perfect craftsmanship. Even the shade of gold that we concentrated on [for the cap], it’s deceptively simple but completely laboured over.”

On the future of Jason Wu beauty:

“The body cream to the shower oil, this colour, this nude — it is like pressed powder — I think this is a very good indication [of what a line would look like]. This fragrance is the first significant step for me. I would love [to do more colour cosmetics]. It is not in the pipeline yet, but it is something I want to do.”

On ten years of the Jason Wu brand:

“I have become much more sure of myself. I have grown up in the industry, from [age] 24 to now, I am 34. It has been a really interesting, exciting, meaningful journey for me. I think I have grown up with the Jason Wu woman. It is a great time to create a fragrance because you really know who you are when it comes to creating something that is not seasonal. I wanted to create something that is somewhat of a new classic. I didn’t want it to be something I had to update every season, I wanted it to be something that I was obsessed with and always going back to it.”