What one woman learned from 75 first dates 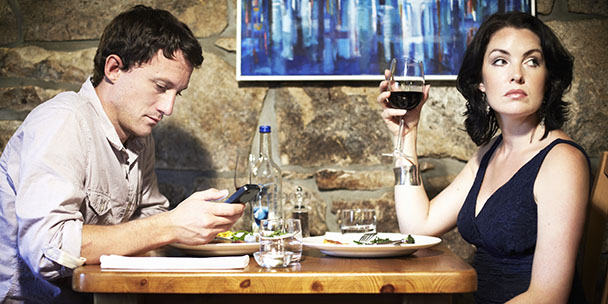 Torontonian Georgie Binks waded back into the dating pool after a divorce and two kids. She went on 75 first dates, most of whom she met online, over five years before she found her Mr. Right. Here are 10 of her (hard-won) takeaways.

1. You need an “A” in chemistry if there’s going to “B” anything physical.
“Meet someone in person right off the bat. You can’t predict chemistry by looking at a picture online of a guy in a baseball cap and sunglasses who professes to love John Irving novels and the Arkells. The most intense chemistry I’ve ever had was with a teensy blond guy detailing my car. And a beefy moustached garbage collector. I never dated either of them, but I still remember them.”

2. Know when to hold them and know when to delete them.
“Look for early warning signs on a date—like spending 20 minutes explaining how your thermo­stat works (true story) or three hours talking about ‘my cousin’s half-sister’s kid’s uncle’s wedding.’ If this happens, there should be no second date.”

3. The dog meter is always accurate.
“Most guys loved my dog because my dog was so fantastic and they were nice guys. I dropped the one guy who pushed my dog away with his foot.”

READ MORE: What happens when an intervention backfires

4. Be sure to know your boundaries.
“When a guy asks your limits, he’s not talking about drinking.”

5. For some guys, getting you drunk is their default.
“I watched more than one guy mentally rearrange the game plan when I told him I’d given up drinking.”

6. Don’t tell them you’re a writer.
“Say you’re a dancer. After all, you do dance, right? One guy actually made me sign an agreement to not write about him…and that’s all I can say.”

READ MORE: Why one woman flew to Greece for a first date

7. The more men you date, the more you’ll get sick of men.
“It can (and did) turn into aversion therapy after a while.”

8. Don’t let your kids meet a first date.
“My kids went hysterical over one poor dude’s pants. (They thought they belonged to his sister.) They stared at another guy for a whole meal. ‘We hate everything about him,’ they confided after.”

9. If you think a guy has something wrong with him, don’t tell him.
“I learned that lesson after meeting a guy with Tourette’s who didn’t know he had it. He still doesn’t. He just thought I was rude.”

10. Your dreams (and lies) can come true.
“I used to tell guys I was back with an old boyfriend to let them down softly. One day, it really happened: My former boyfriend called me up and told me his marriage had ended. After 75 failed first dates, the fact that he had a job, he looked pretty good and I’d already test-driven him meant he was a shoo-in. We’re still together.”

36 questions to get to know yourself better

Two Youtubers share their tale of love in the digital age