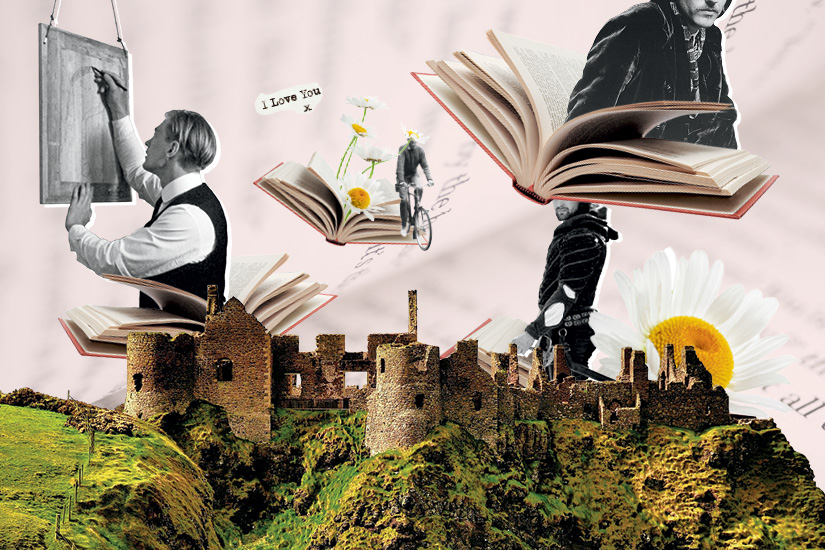 Growing up, I lived in a tiny apartment with my father. He was a janitor. He watched television every night with the volume turned up, pronounced words funny and wore a toque inside because it was cold. I loved him and I loved my life, but I wanted to explore different places; books were my escape.

I spent all my time with my head in medieval castles and Edwardian manors. I used to consider the characters my best friends. I was insanely in love with Anne Shirley. I imagined myself with Catherine from Wuthering Heights, our hair whipping around wildly in the wind and getting tangled up with each other’s. But I had no interest in the dashing Heathcliff – until I turned 14 and male characters began to seem more and more intriguing to me.

My favourites were dashing and conflicted and unpredictable – characters whose inner philosophies led them to strange actions, frivolous fools who would whisper sweet nothings into Anna Karenina’s ear. I had a definite crush on the impulsive George from A Room With a View. I liked his absurdity and playfulness.

I thought about him a lot while sitting on the stoop of my building, eating peanut-butter-and-jelly sandwiches. I fantasized about having conversations with him about the statue of the lion in the park. I visualized him riding by my building on a 10-speed bicycle, his hands off the handlebars, blowing me a kiss. I figured he was the type who always gets hit by cars. I imagined drawing a picture of a question mark on his cast and us both smiling at that.

Then there was the fun-loving Mercutio from Romeo and Juliet. We would slowly fall in love and speak crazy monologues to each other while out drinking behind the bowling alley. He would definitely be a theatre kid. And he would be a great date to bring to junior prom: the life of the party, wearing a baby-blue tuxedo, dancing on his knees while firing finger pistols into the air. In high school, this was the type of boy I fell in love with. The funny, outspoken class clown. I admired all his flights of fancy – until the teachers tired of his shenanigans and he was expelled.

As I moved into college, my tastes in life continued to echo my fascinations on the page. Of all the men surrounding Isabel Archer in The Portrait of a Lady, I liked her sickly cousin Ralph the most. He had been dying his whole life. Since being sick was his full-time occupation, he could only lie on a daybed and have enchanting and astute and generous views of the world.

In college, I found my own Ralph: an artist who was stoned every day. He lay in bed letting the earth slowly turn with him, occasionally commenting on the nature of things. He managed to compose some exquisite poems. Still, there turned out to be only so much a girl could take of a bedridden lover.

I knew it was wrong to be attracted to Raskolnikov in Crime and Punishment. I thought that it was the residual effect of having had a little too much feeling for the Big Bad Wolf and that I’d simply found a version in an Edwardian suit and button-up boots. I loved Raskolnikov in his threadbare clothes, reading books in an attic, coming up with clever, if morally corrupt, theses. I imagined he would write a controversial paper for my ethics class at McGill and he would always argue the obviously wrong side on the debate team. After I graduated, in my 20s, I dated a misanthrope who was intent on making my life a living hell. All he did was criticize me. He was jealous of my happiness and free-spiritedness and was intent on crushing it. I blame him on Raskolnikov.

As a writer, I think that, in some ways, I was searching for a muse – someone I could spin into a character on the page who would match the brilliant eccentricities of these men. And, of course, it wasn’t as if the relationships were all completely bad. Each had its moments.

I think I was looking for men who were problematic and edgy not only because I liked drama but because I liked to be challenged, especially intellectually. And, to be fair, I would say that they were all free thinkers who found new ways to demand that the world be more beautiful – although today I am glad that I’ve closed the book on my story with each one of them.

Heather O’Neill’s third novel, The Lonely Hearts Hotel, is out in February. She’s also the author of Lullabies for Little Criminals and The Girl Who Was Saturday Night.