The Senior Exec Who's Redefining What Being a Boss Really Is 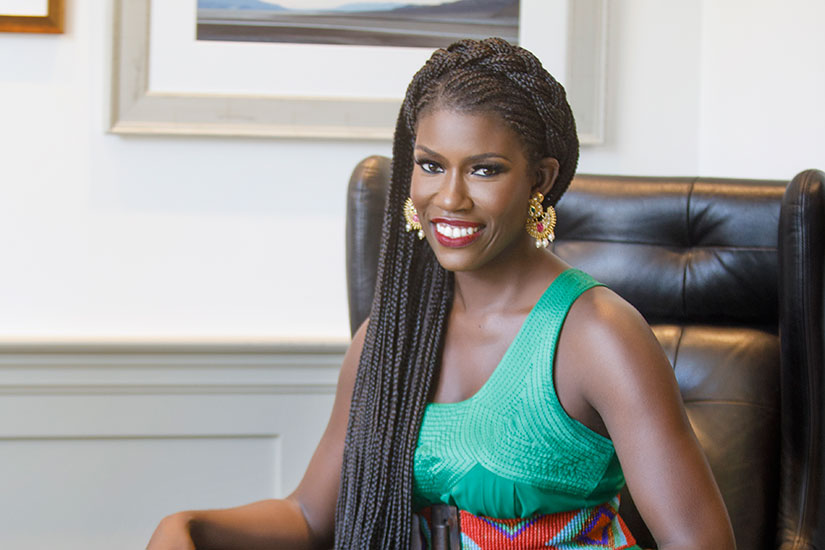 Bozoma Saint John is used to heads turning when she enters a room. The chief brand officer for Uber is five foot 11 (not counting her trademark sky-high stilettos), and her officewear is typically made up of bright colours, sequins or metallics instead of the button-down shirts and chinos often seen in Silicon Valley, where she works.

The 40-year-old powerhouse is a whirlwind of confident energy (or, as she says, “I’m bad as hell!”), but she got to the top by being as brainy, business-minded and tenacious as she is stylish. “Don’t be fooled by the glitter,” she warns. “I’m not Beyoncé! I literally and figuratively did not wake up like this. It took a lot of work — not just the hair and makeup but the attitude.”

From “day one,” Saint John was often the only black woman in the room — starting at the age of 12, when her family moved to Colorado from Ghana, to during her professional experience as a senior-level executive. Her inability to blend into the background required Saint John to develop strategic survival tactics. “There are only two ways to go in these types of situations,” she says at Uber’s offices in Toronto. “Either you are resilient and you shine or you shutter yourself in [and close down].” How did she manage to get into the right mindset? “It’s really tough to be ‘one and only’ or one of just a few, but the beauty is in celebrating that difference. I’m now in a position where I’m comfortable enough in my own skin to stand out and be okay and understand the duality of living as myself: What people see when they look at me is not always what I think they see. It’s their own biases or battles they are bringing along.”

Prior to joining Uber in June 2017, Saint John was head of marketing at Apple Music and before that ran the music and entertainment marketing group at Pepsi. (She may not be Beyoncé, but she is the woman responsible for getting the Texan superstar to perform at the Superbowl for the first time.) Saint John’s role at Uber, a company struggling with divers­ity and a toxic bro-code environment, is focused on not only changing the perception and reputation of the brand externally but also being a major change maker for the company culture internally. It was a move that many close to her weren’t sure was the right one, but she says taking risks isn’t something she fears. “Risk is the essence of any reward — to try the thing that no one else is willing to try,” she says, adding that she strongly believes that Uber is genuinely invested in evolving as a company. “If I didn’t feel there was a desire to change [the culture], I wouldn’t be here.”

My intention is to be EXTRAORDINARY!! So in my first week back at @uber HQ, we created an environment for an extraordinary learning experience. I asked my team to set their own intentions for today/2018… and then invited incredible people who are EXTRAORDINARY in their fields to share their stories of innovation, creativity, fortitude and the “bounce back”! My greatest thanks to @davidchang @briangrazer @72andsunny_ @wolffolins @redscout_ @julialandauer for being so generous with their time and talent! AND to the EXTRAORDINARILY talented brand team… you inspire me every day! #UberBrandDay #ExtraordinaryLife #Watchmework (s/o to @trackmarketing for pulling this altogether!)

Saint John knows that the key to flourishing both personally and professionally is resilience. (Her husband passed away in December 2013 from Burkitt’s lymphoma, and she is raising their daughter on her own.) A strong sense of self-belief and a very supportive, positive internal dialogue are also important. “Knowing how to encourage yourself when others don’t appreciate what you’re bringing—that is what’s going to sustain you when times aren’t easy,” she says. “In fact, that’s when it’s even more important to say ‘I have great ideas; I’m an amazing person.’ Be unapologetic about it. The lesson I learned a long time ago is that no one else is going to celebrate me—I have to celebrate myself. Now, it’s a habit.”