The perfect present: What to buy everyone on your list

Get wrapped up in thse expert gift-giving tips for your friends, family, co-workers and more. 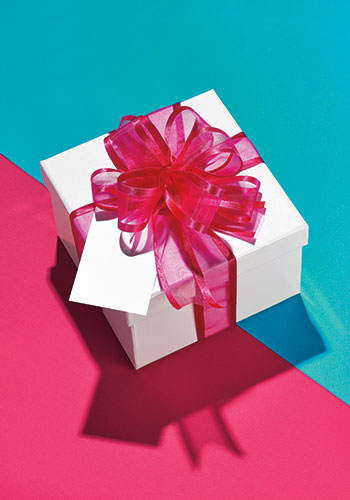 There’s no better time than the holidays to indulge your inner shopaholic – you are buying for others, after all. Half of Canadians say they plan to spend at least $500 this Christmas season, and almost all of that on gifts, according to a recent survey by Tangerine bank. But finding the perfect gift at the perfect price can test even the most seasoned of shoppers. “Scroogenomics” economist Joel Waldfogel estimates that at least 10 percent of what we spend on gifts is wasted on the recipient – meaning that the person would have been happier had you given them the cash equivalent. Here’s some expert advice on how to get the most out of your gifting.

FOR YOUR ROMANTIC INTEREST
Let’s face it: Our partners don’t always get it right when it comes to choosing presents. Even Kanye can strike out, as evidenced by the 2013 Christmas gift he gave to Kim Kardashian: a what-was-he-thinking Birkin bag featuring a portrait of nude women (and a green monster!) hand-painted by famed artist George Condo. Social Cognition published the results of an experiment conducted by University of British Columbia psychologist Elizabeth Dunn and co-authors that tested how men and women react to receiving a questionable gift from their partners. They found that when guys received an undesirable gift from their girlfriend (like a certificate to a discount department store instead of their favourite bookstore), it made them feel “less similar” to their girlfriend and they reported that the future of the relationship was more uncertain. Surprisingly, women reported the exact opposite after opening a bad gift. The explanation, according to the researchers? Women try to downplay negative public signals about the quality of their relationship by taking on a more upbeat attitude. (“At least he got me a gift….”)

MUST-READ: The ultimate gifts for the men in your life

While we all want to find a present our partner will love, we also need to pick something appropriate for the stage that our relationship is at. A recent Match.com survey found that most Canadians think that you should only get someone a holiday gift if you’ve been dating for over a month and that you should spend between $50 and $75. Once you’ve been serious for at least six months, expect to spend $75 or more.

“If you haven’t been together long, focus on your new partner’s hobbies and the fun things you’ve shared,” says shopping expert Lisa Tant, who is also vice-president of exclusive services for Holt Renfrew. “Create an experience, like a night out at the movies or a certificate to a wine bar.” For a long-time love, Tant suggests that partners swap lists of hints, like reminders of favourite sweets or go-to designers (Louboutin, perhaps?) and also include sizes. “My partner loves it when I help him, and then everyone is happy,” she says.

FOR YOUR BEST FRIENDS
When you have shared clothes, secrets and too many episodes of Girls, the gift-giving bar is set pretty high. Up your game by going for a gift that they’ll use every day – like a classic schoolboy blazer – instead of a special-occasions-only item. In a 2014 paper published in the Journal of Consumer Research, experimenters selected pairs of friends and asked one to gift the other with either a high-status or a more practical present. The gift-giver usually preferred to give the fancier choice, while the receiver was usually happier to get the sensible option. What’s more, the recipient thought the practical gift indicated that the giver cared more about her.

Still, Tant notes, gifts are meant to be indulgent. “Especially if the recipient rarely treats herself,” she says. She advises choosing something luxurious that you know the person will use: If your best friend loves sporting a red lip but sticks to a drugstore brand, get her a classic Chanel tube.

FOR YOUR EXTENDED FAMILY
A good gift can help ease tensions when families (and spiked eggnog) get together. A 2014 study in the Journal of Consumer Research concluded that when we shop for multiple recipients, we focus on getting each person a unique gift instead of getting them what they’d like most. According to the study, different gifts may seem more thoughtful to us, but it doesn’t mean that they’ll be more appreciated. For example, your cousin may not be as diehard a Beyoncé fan as her sister, but that doesn’t mean that both sisters wouldn’t really like tickets to a show. There’s no shame in getting the same gift for more than one person, confirms Tant. “Books, movie passes, coffee mugs filled with chocolate or even playful socks have mass appeal but still feel special and personal,” she says.

FOR YOUR WORK COLLEAGUES
Like it or not, most of us spend more time with our co-workers than with our partners (unless, of course, you’ve hooked up with someone at work – no judgment). Spherion, a staffing company, surveyed over 900 employees on their gift-giving habits. Fifty-two percent of people planned to give gifts at work, whether to their co-workers (36 percent), boss (27 percent) or staff (9 percent). When giving to co-workers, 58 percent of respondents said they had never spent more than $25 on a gift. Before you buy something for the higher-ups, note that the majority of people felt that presents were given in order to “suck up.” Fifteen percent of men (and 6 percent of women) even confessed to spending more on a boss’ present to outshine co-workers. Tant’s approach is to give small but thoughtful gifts to co-workers and managers. “I try to find out their favourite sweet or savoury treat and then add a heartfelt note. Giving a large or expensive gift is inappropriate and makes everyone feel uncomfortable,” she says.

MUST-READ: Secret Santa gifts that look like you spent WAY more than $25

FOR YOUR HAIRDRESSER, MANICURIST, DOORMAN, HOUSEKEEPER, PERSONAL TRAINER
They keep your bangs straight, your tips matte and your life in order throughout the year. Come December, should you get them a gift? It depends on whether or not you see them on a regular basis, advises Tant. Though tipping a bit extra close to the holidays is the norm, she recommends including a little something, like a note or a box of chocolates.

A recent study published in The American Economic Review found that adding a thoughtful touch to a cash gift can have a big impact on how the recipient responds. In the study, students were recruited at a German university to catalogue books from a library. All were paid a base hourly wage. Researchers then tried to motivate some of the students to work harder by either giving them extra cash or giving them that same amount of money – but folded into origami shapes and delivered in a gift-wrapped box. Those given the plain extra cash only worked 5 percent harder than students who had been paid the base wage, while those who received the origami money gift were 30 percent more productive. The authors concluded that this shows that the time and effort put into a gift do matter.

MUST-READ: 10 perfect stocking stuffers for everyone on your list

67% of Canadians between the ages of 18 and 34 were satisfied with their gifts last year, compared to 85 percent of those age 55 and up, according to a Purolator survey. Of those who were unhappy, 41 percent said they wouldn’t return the unwanted presents – mostly because they would feel guilty about it.

68% of Canadians reported that they plan to shop from their smartphones or tablets this year and 38 percent admit to doing it while in bed, according to a Pollara survey for PayPal, which also reports we will spend an average of $243 buying gifts from our smartphones and tablets this season.

READ MORE:
The ultimate 2014 holiday gift guide
The 10 most extravagant holiday gifts
The best fragrance gift ideas
The most stylish tech gadgets to give this year