Social media: Why I'm just not that into you

Keep your selfies, tweets and friend requests to yourself. Why one millennial is opting out of social networking. 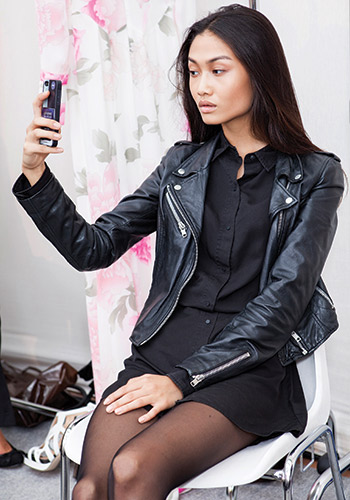 Howdy, stranger! I suppose we’re technically acquainted, but I feel like I don’t really know who (or what) you ac­tually are. Sure, you know my name, in various forms, through logins for all the different times I’ve “met” you optimistically setting up accounts on Twitter, Facebook, Instagram and LinkedIn. (Does MSN count?)

We’ve interacted a few times—I tweet now and again, and I’d be lying if I didn’t admit to a bit of Facebook lurking. (Why is everyone suddenly engaged?) I do these things sporadically, uncertainly and mainly because I think I should. The
highlight of my social­ media career is the time that @RoyalFoetus, a parody account, replied to me on Twitter.

You might think this is strange, SM, given the fact that I’m a Millennial. After all, my generation is supposed to be glued to our smartphones—Tumblr­ing, Yelping and Tindering furiously from our parents’ basements. But you know my secret shame, don’t you? (Were the 44 Instagram followers the giveaway?) The truth is, I don’t “get” you, SM.

You’re okay, I guess, in a mildly interesting “Oh, look, a GIF of a cat snuggling a porcupine” kind of way. Sometimes it’s nice to Instagram your pet and get a few likes (although it always leaves me incredulous that there are people who seem to do nothing but “like” anything #feline). But are you a revolutionary, addictive force in my life, an integral part of how I live on a daily basis? Well, no.

In a world where people love you so much that “Internet addiction” has entered the mental­ health lexi­con and digital ­detox centres exist in hyperwired places like South Korea, our
lack of profound connection useed to concern me. For a while, I worried that something was wrong with me because I’m so disengaged. Most people aged 16 to 34 spend four hours a day on social media, according to a 2013 Ipsos survey, yet I get boredafter 10 minutes of scrolling through baby pictures on Facebook. I had FOMO (fear of missing out) about not having FOMO. (The narcissism of this dilemma is not lost on me.) Our lack of spark was frustrating, particu­larly because of how “important” everyone says you are, SM (not least the psychologists and employers who find it “suspicious”—perhaps even psychopathic—for a young person not to be on Facebook).

Truthfully, you have a negligible impact on my social life. My friends still call me if
I don’t “like” their self­ies, and we already accommodate non  Facebookers in the gang by emailing group plans anyway. I am certainly never becoming besties with the spambots that make up a good chunk of my Twitter followers. (But thanks for the ego boost, guys!)

Can you be a MINIMALIST in today’s MAXIMALIST WORLD?

Not being wired to my iPhone might not impact me friend­wise, but it certainly could professionally—at least, that’s what Amber MacArthur, a Toronto­ based social­ media consultant, warned when I asked her to weigh in. She told me that if an employer is going to choose between two candidates, he or she will choose the one with the stronger online presence. So I can’t completely shut you off. MacArthur also pointed out that the prob­lem could be me, not you, SM. She suggested that I hadn’t quite found “the one” yet—the social­ media platform that is just right for me. (Actually, she said that two or three “ones” are manageable—that, beyond Facebook, there are many social­ media websites I can choose from based on my interests. Then she directed me to Ravelry, a network just for knitters.)

But all these options are only half the problem. I can’t even fit on one hand the number of social networks I “need” to be on. Grasping the “point” of Twitter feels like child’s play compared to understanding the purpose of the baffling bank of images that is Pinterest. And each new network I join comes with a complex
new set of etiquette rules (who can parse the difference between “liking” on Facebook versus Instagram?), not to mention the dispiriting task of acquiring new “friends,” “followers” or “connections.”

RELATIONSHIPS: How to LIVE HAPPILY EVER AFTER

It’s not like I haven’t tried to make this work, SM. I’ve seen people having witty repartee with friends, and even strangers, on Twitter, and sometimes I’ve felt a little left out. I’ve watched ordinary people build extraordinary careers from their engagement with you (ahem, Kim Kardashian), but I would never dream of commenting on a beauty blogger’s YouTube video to tell her how pretty she looks in that pink lipstick. I’ve hesitated to “like” an old acquaintance’s big announcement on Facebook, felt weird about it after I did and then gossiped about it to another friend who was actually physically with me at the time.

SM, you just have a way of making things feel extra-awkward and artificial (#sorrynotsorry). Maybe the reason I don’t tweet very much is because I don’t like limiting my conversations to 140 characters or less. Perhaps I don’t mindlessly post to Instagram because I don’t like the person I’m becoming when I take pictures of things just to show people where I am (and how important that makes me). Admitting this makes me feel better about our fractured relationship. (You must admit, SM, you are very good at making people feel bad about themselves.)

How does a disconnected millennial fare in an overly connected social culture? Find out on the next page!

Aside from one friend who doesn’t even own a cellphone, I thought I was the only one who doesn’t get along with you. Even a statistic that seemed hopeful at first—25 percent fewer teenagers use Facebook now than in 2011—turned out to be depressing: Teenagers are actually just migrating to other sites on the Internet.

How to climb the SOCIAL MEDIA ladder

But then I called up Echo Valley Ranch & Spa, a wilderness resort in British Columbia that is promoting its first “digital detox.” I asked if they had any special activities planned for the social-media addicted , but, no— the only difference is that the lodge will be turning off its satellite signal for the weekend. The spokesperson for the resort explained that they actually labelled that particular weekend a “digital detox” because the media kept inquiring about this kind of initiative—not because guests specifically requested it. The guests will just enjoy themselves as they always do: hiking in the valley, riding in the forest, eating homemade cookies and—shocker—
enjoying their own and others’ company.

Could the solution really be that easy? Could it be that you’re not as big a deal as I think you are, SM?

And here’s the kicker: A recent study by Washington-based think tank Pew Research Center found that more than 50 percent of Internet users are only on one (or no!) social media network. That is half of the virtual population—blissfully browsing eBay, watching honey-badger videos and not racking their brains to remember the password to a Google or a LinkedIn account they set up a couple of years ago and then never touched.

All of this to say: I realize, SM, that you will always be a part of my life. You might even be a helpful part of it, especially when you allow me to exchange messages (albeit shallow ones) with faraway friends or do a quick scan of Twitter for the day’s
events when I get to work
in the morning. So instead of feeling overwhelmed by everything you offer and ask of me, I’ve decided to embrace the philosophy of “JOMO”— not the joy of missing out on the fun that everyone’s having without me while using you, SM, but the joy of (sometimes) actually missing out on you.