We girls need (gay) guys. Here's why -- with field-tested tips for finding a Will to your Grace. 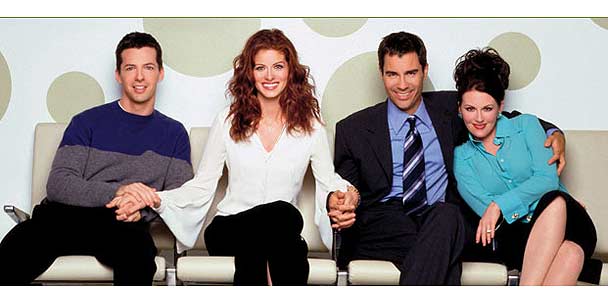 Every girl needs a gay guy (or two) in her inner circle. Forget stereotypes about shopping ’til you drop or spending hours giggling over cosmos together. (Though that can be fun too.) The main perk that straight chicks get from hanging with gay men is companionship with someone who really, really "gets" you… without trying to, y’know, get into your pants.

Brooklynite Catherine Vera, 32, says most of her pals are gay men. "Every girl needs a gay man in her life. When I went through a
horrible break up, I found it was easier to cry on the shoulder of a man who had no interest in hearing my problems just so he could sleep with me when I was feeling vulnerable," she says.

Further, says Natasha Woods, 25, of Minneapolis MN, "A gay man gives you a guys’ perspective – but many have a woman’s compassion and closeness. It’s hard to be close to a straight man without someone thinking you’re together, or your boyfriend or his girlfriend getting upset," she says.

"There are a lot of similarities" between straight women and gay men, she adds. Just as women have grown up experiencing sexism, gay men have experienced homophobia. And… well, stereotypes notwithstanding, many gay men
do love the same things many urban women do: the arts, fine dining, retail therapy, fashion.

Also, admit it: sometimes "women can become very competitive with their friends, which can cause problems. With a gay friend there’s no competitive feeling to look cuter, or have the better boyfriend, etc. You’re just really happy for each other," says Woods.

Alex Bie, a 24-year-old gay man living in San Francisco says the knife cuts both ways. "With other gay guys, there’s always competition. My friendship with straight females is different because there’s none. They complement me and I complement them. Straight females act like a
great accessory to an already flawless outfit!"

"Gay guys want a straight girl to complete their lives just as much as we girls need a guy who likes us for more than our curves," agrees Meg Watterson, 23, of Atlanta GA. "Let’s face it, who wants to hang out with guys all the time?" Watterson met her gay sidekick in high school, and stresses that he’s her true best friend – not a token-minority pal.

Ilse Kukuls, a Toronto woman in her 60s, has been best friends with a gay man for 47 years – longer than her marriage. She met her BFF in high school. "I fell in love with him… Later, I found out he was gay. I didn’t quite understand what that meant, as it was 1962. Gay culture was still in the closet," she says. She got over it, got married – and the two remain super-tight. "Our creative juices are always in sync and we discuss cosmic issues – and personal crap! We’re in constant communication," she says.

That’s great, you might be thinking, but I’m not in high school or university – so where am I going to meet my Prince Charming?
We’ve got you covered on the next page.

"Courting" a gay man is like pursuing any other post-adolescent friendship. You try to meet someone special and move your interaction from "generic friendliness" to "real-life pals" without channeling a wannabe/stalker vibe. Here are some tips.

• "Test the waters – invite him to lunch," says Woods, who met one of her gay friends at the office. "Make it a point to chat with him at the office happy hour. Or invite a few people from the office out for dinner after work [including him]. Start out with little invitations and if you have enough in common, a friendship should blossom," she says.

• "Network!" says Watterson. "Use a girlfriend who already has a gay best friend!"

• Volunteer. It worked for Jim Guttau, 31, of Denver CO, when he moved cross-country five years ago and was jonesing for a new gal pal. "I met my best friend, Heidi, at a charity fashion show. Two months later, I met another good friend through the chamber of commerce. I’d suggest volunteering to any girls searching for a gay best friend. Much easier than visiting all the gay bars in town – and hey, you’re doing something for the community at the same time."

• Ask questions. "What will really seal the deal is when you ask a gay guy about how they came out of the closet," says Wie. "When someone takes the time to listen and really wants to hear my story, it says a lot about them to me."

Read more
Learn how to flirt through texting