Taking Care of Your Kids And Your Parents? You're Not Alone

Stuck in the middle. 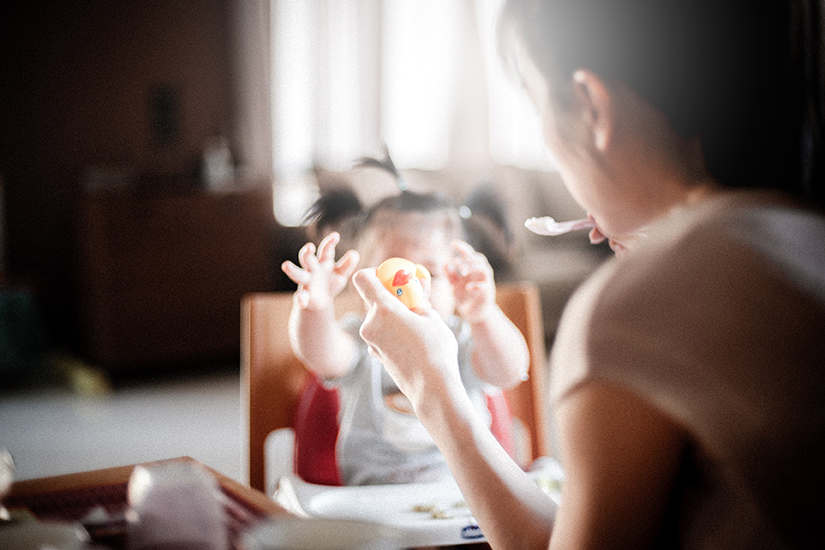 When my husband and I bought our first home in Toronto’s West End, after years of attending open houses and more than a few failed bidding wars, it was a happy coincidence that our winning offer landed us less than two kilometres away from my childhood home. At the time, being that close to my parents was a bonus but not a priority—after all, I only saw them every two or three weeks when we lived farther downtown and a few times annually during the years that I lived in Brooklyn.

Six years and two kids later, I’m an exhausted millennial mom, and I nearly weep with joy when I think about my physical proximity to my now-retired mom and dad. They watch our toddler two days a week and will often stop by just to drop off my favourite home-cooked Vietnamese dishes like pho soup and Bò Bía wraps. But living so close to my parents, who are now entering their 70s, also means that I’ve become the default “Ask Siri” for them.

Whenever high winds blow shingles off their roof, when they’re locked out of their email for the millionth time or when they want to find a cheap flight for a wedding, I get a call. In some ways, the expectations about my role in the family have been honed over the decades. As the eldest daughter of immigrants, it was always my job to translate, literally and figuratively, the nuances of our new life in Canada—I was filling out school forms and replying to government letters for them when I was still in grade school.

I’ve always been grateful that I’m able to be helpful, but the increasing regularity of their requests in recent years has given rise to fear about their declining health. Coupled with the hectic pace of my full-time work and efforts to raise two children under the age of five, this has resulted in my sometimes feeling more tense than the crowd during game six of the NBA Finals.

It turns out I’m one of about 25 percent of Canadians who are caught in the squeeze of the so-called “sandwich generation.” The boomers may have been the first to be defined by the juggling act of supporting their children while also caring for their parents, but Gen-Xers and millennials have put the term into overdrive, thanks to demographic changes and high housing costs that didn’t exist when it was first coined in 1981.

“We have this population: Their parents are still around and need increasingly more care, but because they delayed [having children], their kids are young enough that they still need childcare—they’re between these competing demands,” says Angelina Grigoryeva, an assistant professor of sociology at the University of Toronto who specializes in inequalities in households.

All this caregiving, although it’s associated with several positive outcomes like improved relationships (these days, I talk to my parents almost daily, which hasn’t been the case since I moved out almost 15 years ago), can also lead to anxiety, fatigue and resentment, say the experts. A few of my friends have passed up job opportunities abroad because of caregiving demands at home, and I definitely wish I could have pressed “delete” on some things I said (and thought), like the argument my dad and I recently had when he asked me to help him with some home repairs and then tried to send my (prepaid) contractor away at the last minute when he changed his mind. Twice.

You can probably guess where I’m going with this: Women are bearing the brunt of this unpaid emotional and physical labour. A joint 2012 study by Carleton and Western universities found that we are twice as likely to feel the pinch of the sandwich generation as men are: We are not only more apt than men to be caregivers but also more likely to find the role demanding and be negatively affected by it, mostly because we have so much else on our plates. “Women today are balancing careers and children and supporting their families,” says Deirdre Speers, executive director of the social services agency at Family Services Ottawa.

“There’s a sense of ‘How do I do all this for all these people?’” Interestingly, my brother, who lives just 15 minutes away from our parents, considers meeting up with our dad weekly for Sunday brunch the extent of his filial responsibilities. It’s a complicated story, but it’s not an unusual division of labour—Grigoryeva’s research has found that adult sons provide relatively less care to their parents if they have sisters, whereas for daughters it’s the opposite.

For some, this caregiving comes with a financial toll, particularly if they’re providing support to parents while paying for daycare and other child-care costs or cutting down on work hours in order to fulfill caregiving responsibilities. And unlike in many other cultures, including my own, today most Canadians are not living in multi-generational households where financial and time burdens may be more easily shared among family members.

The good news? “There is help out there; you just have to take the time to seek it,” says Speers, who recommends connecting with municipal service agencies that may offer family support services. Finding balance could also mean adding others to the care team to help with your parents or your family, if necessary, or holding a family meeting with siblings to create a shared plan for caring for elderly parents.

Also key is prioritizing yourself and saving time for things that make you happy. “Try not to feel guilty,” adds Speers. “You can’t always be there for everything, and you have to try to figure out the balance for yourself in the big picture.” I’m working on it slowly but surely—and in the meantime, I’m thankful to have both generations by my side.