Like it or not, text messaging is the new way to flirt. Learn how to navigate the virtual playing field with these tips and tricks. 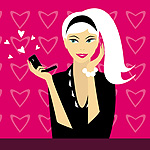 “When I get that feeling, it’s like text-ual healing….”

It’s 11:30pm on a Tuesday night. You’re entering the 3-day rule and expecting the cute guy you met at the bar on Saturday to give you a call. But, instead of a ring at an appropriate time, your phone vibrates as you’re preparing for bed. It’s him and it’s a text that reads: “Whatcha’ doing?” Hmmm… you think about your response and type back, “Not much, you?” And then it begins. A back-and-forth text messaging marathon where the sentences are short, the banter even more so. Two weeks later and you’re still doing the “Hi, how are you?” routine and a date has yet to be set.

Although text messaging, otherwise known as SMS (Or “short message service”) does have the benefit of fast communication, you can find yourself pushing the wrong buttons, especially where women are concerned. Josey Vogels, has this to say about the new textual revolution, “I think that internet dating is to blame,” she says. “We have this ‘shopping mentality’ where we’ve lost some of the fun risk-taking that comes with actually meeting someone face-to-face. Text messaging is the perfect example: You can feel like you’re putting yourself out there without having to deal with “live” rejection. Unfortunately, the best things in life usually require a little risk.” Have you tried flirting through Twitter? Get the dos and don’ts here!

In terms of sustaining an existing relationship, is all of this texting hurting or helping? Vogels thinks it depends on the person. “If you use it to hide behind having actual conversations with your significant other, than it’s definitely unhealthy,” she says. “But, if you use it to enhance a romance — or rev up a new encounter — by sending quick romantic missives, it can be sweet and sexy. It can be used as the modern day love letter!”
Get the 5 rules for textting on the next page …

10 signs your guy could be Mr. WrongRule #1: Don’t text at any hour of the night
You wouldn’t necessarily call someone at midnight, so don’t text, either. Cell phones still ring when a text message is received so be respectful of what that person’s lifestyle is. A text on a random Wednesday night at 2am isn’t cool …it makes you look needy and inconsiderate.

Rule #2: Watch your tone
Like email, your inflection on text can be read wrong. Whether you’re trying to flirt or find out if the receiver is really that into you, opt for this one general tip: Don’t say anything over text that you wouldn’t say in person. Texting is meant to be fun and flirty, so save your little missives for cute quips and witticisms. Avoid overly racy comments unless you’ve been nudged on the other side first. Nothing says “L8tr” faster than a text that’s totally inappropriate to repeat out loud.

Rule #3: Don’t drink and text
This one pretty much speaks for itself. Alcohol and messaging is a cocktail headed for disaster. True, a lot of us do it, but if you’re totally off your chain and sending messages that are going to embarrass you later, leave your cell at home. You’ll thank yourself in the morning. As for the ‘booty call’ (and, come on, we know you’ve done it), pick up the phone and dial. A real voice is sure to get that person the mood even more.

Rule #4: Don’t overdo it
Don’t bombard someone with a million texts. Like instant messaging, know when to end an exchange. We’re all busy people and it can make you look obsessive even though that may not have been your intention.

Rule #5: Don’t break up with someone over text or deal with any other serious issues for that matter.
Texting does not replace human interaction no matter how much you wish it could. Having a fight with your significant other? Don’t deal blows via text, call and fix your issues face-to-face. By the time you finish typing the message anyway you could already be enjoying the thrills of a make-up session.