Relationships in the family: Saying goodbye to a grandfather

When his grandfather died, Bobby Box learned a lesson in love, loss and what to wear. 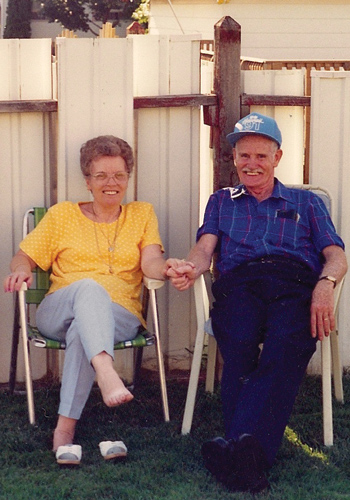 Two weeks was all it took. My grandfather was struck down with colon cancer so suddenly that by the time I made it to the hospital to visit him, I was advised to stay in the waiting room.

At 17, I was the youngest in the family, and my parents wanted me to remember my grandpa as I knew him. So, as tough decisions were being made, I sat alone, realizing that the greatest influence of my life would soon live only in crooked-grin photographs. He was nicknamed “Smiley Joe” for his bright demeanour, but now, his eyes often closed, he was shut off from the world around him. In a sense, I was confronting my own mortality. My grandfather and I had always been nearly identical, in both looks and nature.

Life lessons from your FATHER-IN-LAW

Joe and I shared obvious quirks and physical traits: red hair, a lanky build, an affinity for plaid and cardigans, a desire to spend hours scouring bookstores. Gentle and contemplative, Joe had a library that inspired me to start my own. As I grew into my teens, our resemblance became more remarkable. Soon after his passing, my grandmother could barely look at me. She’d turn to my mom with watery eyes and say, “There’s my Joe.”

I was roughly the same age my grandparents were when they first met and fell in love: She was visiting from Italy; he was a red-headed Canadian bricklayer. My grandmother never went back home. She married my grandfather and stayed by his side until the day he passed—while I was separated from them by six inches of drywall, sitting in the muted waiting room and listening to the orchestra of heart monitors, shoes squeaking on laminate and the hushed tones of other worried families.

As I sat there, a flickering reel of memories played on the room’s neutral wall, vivid scenes of the semi-frivolous sleepovers I’d had at my grandparents’ house. We’d eat an early dinner. My grandmother’s Italian food was copious and consistently delicious. When I had licked the last speck of spaghetti sauce from my plate, my grandparents would do the dishes, side by side, while I picked a movie from my grandpa’s massive alphabetical offering and popped it in the VCR. We must have watched Willy Wonka & the Chocolate Factory over a dozen times. Charlie and I both had a Grandpa Joe.

A rocky RELATIONSHIP WITH YOUR FATHER

About halfway through the film—around the time Violet Beauregarde is rolled out of the factory—my grandma would serve warm homemade applesauce and I’d wake my grandpa, who was usually asleep behind his newspaper. Between mouthfuls, we’d talk about everything, like which Batman villain had the best chance at duelling it out with the Justice League. The rest of the movie would wait until morning.

Bobby Box remembers Grandpa Joe on the next page…

If my cousins were also sleeping over, the four of us would line up our sleeping bags like eggs in a carton. Joe would turn out the lights and tell us he was going to sleep—but we knew he wasn’t. Instead, he’d duck behind the bed while we lay giggling in anticipation and then crawl his way toward us in the darkness, delivering a thundershower of tickles as we shrieked with laughter.

A FATHER’S FIRST STEPS with this daughter

A few years later, Joe was rushed to the hospital with his first cancer scare. I was nine, and I wasn’t sure how to cope with sickness. So, early one morning, I turned on my dad’s big old computer and wrote a poem. “A loved one is in the hospital today,” it read. “And my whole family hopes that he is okay.” Though not eloquent, these words meant the world to my grandfather. He excitedly showed it to nurses, visitors and even the patients with whom he shared a room. As soon as he got home, he framed the poem—typed in Lucida Grande font and decorated with two uneven roses from the clip-art gallery—and proudly displayed it above his bed. It’s still there.

Joe kept everything neat: books, movies, hand-drawn Legend of Zelda maps. This was one of the few traits he didn’t pass down to me, unfortunately. My desktop speaks for itself: I had six versions of this story scattered across the screen. Lost in a wave of nostalgia, I finished getting the memories of my grandfather down in writing. I placed the first five versions of the story in the trash and turned off my laptop. I was taken aback by what I saw in the empty black screen: a blurred reflection of a grown man, a bearded man. I straightened my plaid shirt, smoothed my cardigan and slowly closed my laptop.