Relationships: In defence of the crazy cat lady

How do you know if you've become a crazy cat lady? 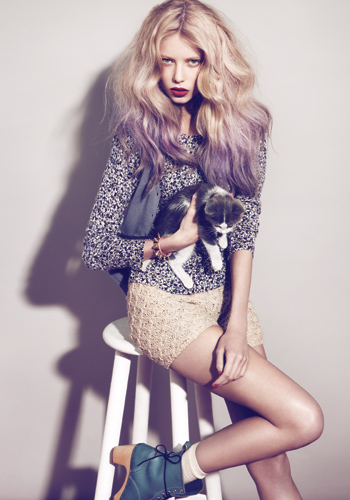 I also have a husband. Not that there’d be anything wrong if I didn’t, but that’s how I defensively suffix the confession that I have three cats. “Three cats?” is the stereotypical throat-clearing response, as if the listener were hoping (for my sake) to have misheard. She then struggles to adjust her facial expression, negotiating some mélange of disdain and confusion—the kind of troubled look my cats assume before hurling up a hairball.

I don’t wear my hair in Mrs. Roper-style rollers or sport a Whiskas-encrusted bathrobe with bouquets of kittens popping out of the pockets. (Though, frankly, having pockets full of kittens sounds like living the dream.) Nonetheless, I am a CCL (Crazy Cat Lady). I’ve sought out a nail polish that approximates the delicate pale pink of Penguin’s nose pad. I compare my cats to other people’s (human) children. “Robbie has been sick,” a friend of mine recently told me about her toddler. “Oh, I know, Lemon wasn’t eating her meat cookies recently and I worried she had the flu! Did you take Robbie to the vet—I mean, the doctor?”

I now lay claim to an impressive collection of cat-related gifts: figurines, cat-eared toques, books (How to Tell If Your Cat Is Plotting to Kill You) and CDs of meowed melodies. The latest addition to this cat-alogue (forgive me) is a framed New Yorker cartoon: A mother and father cat are sending their cat son away (to cat college, presumably). The father puts his paw on his young son’s shoulder and offers this paternal exhortation: “Find a patch of sunlight, my boy. Find a patch of sunlight and bask in it!” Never were wiser words spoken.

But if cats and their socially maligned owners have long been deemed the misfits of the pet world, today, finally, they are enjoying their time in the sun—where they belong. This fall, New York’s Metropolitan Museum of Art unveiled its latest exhibit, Balthus: Girls and Cats, in tribute to the French artist’s focus on felines and childhood; this past summer, Brooklyn Museum’s exhibition Divine Felines explored the role of cats in ancient Egypt; and this month, The New Yorker is releasing its inaugural coffee-table tome, The Big New Yorker Book of Cats, a lovely anthology of articles, illustrations and poems by such writers and cat lovers as M.F.K. Fisher, Anthony Lane and Calvin Trillin.

Relationships: How to PURSUE A NEW MAN

It all started when I was 10, after I’d enrolled in Horse Lovers’ Day Camp. (I know, why isn’t there a Cat Lovers’ Day Camp? Alas.) There were a few horsey girls at school—the sort who looked great in high ponytails and had trampolines in their backyards—whom I longed to emulate. I needed to spend my summers saddle-side; my parents generously obliged. The camp’s name assumed a higher meaning when I was sitting with a fellow camper, Jenny, during our daily handicrafts session. I was braiding a bracelet and Jenny was sketching a portrait of herself and Bubbles, a dappled Arabian.

“Who’s your horse?” Jenny asked me as she carefully rendered Bubbles’ mane. (We had each been matched up with a member of the Horse Lovers’ stable.)

“Yeah, he’s cute,” she said, looking down a bit shyly and drawing a scallop-edged cartoon cloud. “What do you think of Bubbles?”

“I don’t really know him,” I answered. “He seems pretty nice.”

“Do you love Boy George?” she asked pointedly. I sensed my answer might determine the direction of our friendship. But before I could answer, she blurted, “I love Bubbles.” She pushed on while affectionately sketching in his flanks. “I want to marry Bubbles. Do you want to marry Boy George?”

More about the crazy cat lady on the next page…

It was then that I realized I might not have the ardour to be a genuine horse lover. I realized what I truly wanted was something more laid-back: a cat. I launched a campaign (weeping, mostly), and after a couple of years of feline-inspired histrionics, my parents agreed to let me adopt a kitten from the Toronto Humane Society for my 12th birthday. When we arrived in the adoption room, we saw a tiny brown tabby sitting politely in a cage, his front paws pressed daintily together with the grace of Baryshnikov. There was something unnatural about seeing that creature in those circumstances, like encountering a maharaja at an IHOP. If the other cats in the room were sleeping, sadly resigned to their fate, this one was indignant, swiping his nickel-sized paws through the metal bars in rebellion. This two-pound, three-month-old parcel of fur and whiskers had more confidence than I had managed to accumulate in 12 years. As if respecting his orders, we sprang him from the clink that day. The staff at the shelter warned us that it might take him several days to adapt to his new environment. But luxury has a short learning curve. And as soon as he arrived, he began strolling about the place with the vainglory of a monarch in his royal gardens. We called him Julius.

What is the PRICE OF PREGNANCY?

My dad established a fast bond with Julius—arguably because they were the only two men in the house. My mom proposed a different theory. “Richard is not Julius’ father,” she explained. “He is Julius’ slave.” (In my dad’s defence, Julius could have made the Sultan of Brunei feel like a serf.) In the hopes of ensuring Julius’ supreme comfort, my dad, having discovered that the cat preferred his meals warm, took to heating Julius’ pâté in the microwave for 13 seconds. How he made such an exact discovery is unclear—especially since Julius never gave anyone the satisfaction of making his preferences obvious. If his food was served cold, Julius would eyeball it for a few seconds, whiskers twitching in a spasm of repulsion, and then wander casually away, disappointed by the service these days. When he did deign to eat his food (if acceptably warmed), he’d nibble at it but without gusto—he was never vulnerable to the vulgarity of appetite or the idiocy of enthusiasm. (About the disturbing fragrance our microwave soon acquired: I will say that there’s a compelling reason kitchen products and candles are never, say, turkey-scented.)

My dad’s connection with Julius was never more apparent than when Julius accidentally singed the tips of his whiskers on a candle. Julius dashed out of the room with unusual haste, but even while painfully on the lam, he remained composed. As Julius sprinted, my father screamed wildly, grabbing his own cheeks whence, were he a cat, whiskers would sprout.

“Richard, why are you shouting and holding your face like that?” my mom asked him.

“Did you see what happened to Julius? To his whiskers? There are nerve endings in them!” he said, stroking his cheeks gently, as if to soothe them. “It’s extremely painful!”

After Julius passed on (surely to some well-staffed palace that serves properly heated food and an abundance of Kalamata olives, his favourite—a taste we attributed to his birthplace: Toronto’s Greek neighbourhood), I resolved to get a cat of my own. Or maybe two. (They’d never get lonely, I told myself.) So, I adopted a brother and sister who had been found in a cardboard box in a Toronto warehouse. They were (at first) tiny and (a mother’s bias) tremendously adorable. I named them Lemon and Penguin. A few years later, we were at the vet’s office for a checkup when one of the staffers, with a sense for the vulnerable, sized me up and announced: “Wait till you see what I have in the back!” A few minutes later, he reappeared with a one-pound calico kitten, wrapped like an ice cream cone in a miniature ballet-slipper-pink towel that matched her pads. It was, of course, like presenting an alcoholic with an open bottle of Tanqueray. I looked at my now husband, who proceeded to rub his face vigorously and then declared, with a hint of anguish: “I guess we could use a third.” And that’s how we ended up with Bonnet. And a thoroughly dismembered couch.

Is your RELATIONSHIP WITH YOUR FATHER far from perfect?

It seems uncatlike to embark on a defence of what makes cats so amusing and, frankly, exquisite. (I’ll leave that kind of obvious PR effort to the dog people.) I remember my paternal grandmother (a dog person) once asking me with trademark acidity: “Why do you love cats? They won’t perform for you.” This remains, of course, among the chief reasons I love them. If the non-feline among us spend our lives compromising—and compromised— cats unapologetically refuse. (And while our society may be held in thrall to ideals of productivity, cats are busy too: napping, snacking, napping, seeking out patches of sunshine.)

Perhaps I’m accustomed to being treated with ennui and a hint of disdain. (My mom’s side of the family is French.) But I love finding Lemon with her claws piercing into the arm of what used to be our couch, only to have her notice me and swing her ears back in irritation, as if I were interrupting a genius in her atelier mid-masterwork. I love that serving Penguin a morsel of food prompts an hour-and-a-half bathing session, complete with
mani-pedi—which would be like me having to book a hammam treatment after eating a Tic Tac. And I admire how Bonnet can nimbly leap onto our kitchen countertops with barely any élan—as if I could jump to the top of my condo three times a day for the chance to enjoy a flake of tuna.

5 ways to find your TRUE LOVE

The other day, while I was writing this story, I turned to Bonnet, who was in some advanced phase of sleep in our salad bowl. I told her the news: “Cats are finally having a moment! There’s an exhibit about your ancestors at the Brooklyn Museum and a beautiful
New Yorker book about you!” She half-opened her left eye and yawned.