These seemingly mismatched celebrity pairs have made love endure – and their relationships stand the test of time in Hollywood. 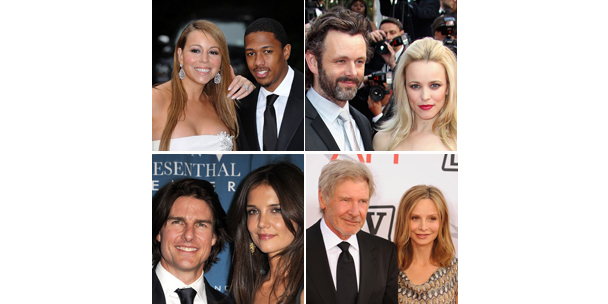 In a world where breakups are as common as rehab stints, Hollywood’s oddest couples seem to be the ones going the distance. These strange relationship pairings were subject to plenty of raised eyebrows when they first hooked up, but over time they have, surprisingly, silenced their critics.

When Tom Cruise found whirlwind love with Katie Holmes, he sent the gossip mill in to over-drive. Not that there was anything wrong with two beautiful people falling for each other, but considering their age gap, social circles and celebrity statuses, their union seemed dubious. But Cruise took a trip to the Oprah Winfrey Show and pronounced his undying affection for Holmes by infamously jumping on her couch. Their story was so over-the-top that we all wondered if their relationship was fabricated or the real thing. But six years on, the now married couple is still together. When Cruise is filming a new action flick, you can expect to see Holmes and Suri supporting him on set and the same goes for when she is working, Cruise is always there cheering her on.

After an on-again/off-again relationship with fellow Canadian actor and Notebook co-star, Ryan Gosling, we expected Rachel McAdams to snag herself another superstar stud. That’s why when she was spotted with seasoned thesp Michael Sheen, she caught everyone off-guard. The British stage actor who recently became popular with the tween crowd, playing the villain Aro in the Twilight series, is ten years her senior and has a 12-year-old daughter (with former girlfriend, actress, Kate Beckinsale). The couple met on set while filming the Woody Allen romantic comedy Midnight in Paris in July of 2010 and have been inseparable since. The two were spotted smooching while riding the subway in Toronto back in June, shortly after confirming their relationship in Cannes the month prior. What makes these two click? A shared sense of humour. Sheen has been quoted saying that McAdams has a knack for making him laugh.

More odd celebrity couples on the next page…

Mariah Carey has had her share of odd romantic relationships (she’s been linked to rapper Eminem, for one, who later dissed her in couple of his songs). But no one could have predicted the Grammy award-winning songbird to fall head over heels in love with comedian and actor Nick Cannon. Cannon had just ended an engagement with Victoria’s Secret model Selita E. Banks when he met Carey in 2008 and they immediately began dating. Just a few months later he proposed and they married in the Bahamas. Now three years later they have an adorable set of twins, Monroe and Moroccan Scott Cannon.

Back in 2003 when they started dating, many dismissed this May-December romance as a fleeting fling – not the real thing. Eight years later, this pair is still steadfast: tweeting photos of each other online and supporting each other’s projects (Kutcher will be replacing Charlie Sheen on Two and a Half Men this fall). Moore dished that Kutcher likes to leave Post-it notes with words of encouragement for her all over their house – she revealed that some remained in their place for up to seven years.

This pair immediately hit it off after meeting in 2002 at the Golden Globes and have been together ever since. Flockhart has referred to their relationship as “easy” and “honest.” So comfortable, in fact, that on their wedding day, in June 2010, Ford wore a pair of Wrangler jeans. Although this is Ford’s third marriage, he is more dedicated to Flockhart than his previous wives. He has been open with the fact that his career and the industry was the reason that his past marriages never lasted, once saying that he was a better actor than a husband or a father. But, in his relationship with Flockhart, they stay out of the public eye, despite demanding careers.