If life is all about who you know, can your pals really make you richer, thinner and more successful? 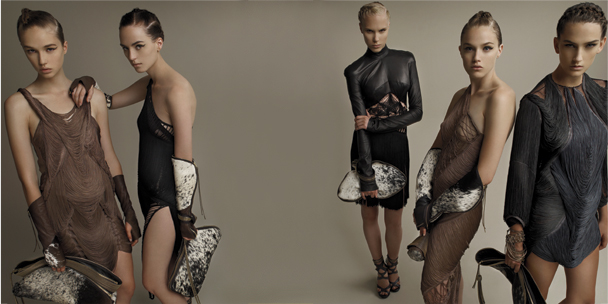 Biology is a handy scapegoat. It can justify a lot. Take, for example, the female ability to influence one another. Hang around in the same social web long enough and we even sync menstrual cycles, so presumably our tendency to dress alike comes down to more than a shared proximity to the Bay.

At least that’s what social scientists Nicholas Christakis and James Fowler suggest in their book
Connected: The Surprising Power of Social Networks and How They Shape Our Lives. Based on more than 50 years of studies, Christakis and Fowler’s book argues that who you are— from your clothes to your weight to your aspirations— is largely attributable to those around you. And, they say, you can use this knowledge to change your life.

You need only go as far as your wardrobe for evidence. If you’re ahead of the fashion pack, you can bet that copies of your new buy will filter through your friendship group.

And how about beauty? One of my friends was anti- Botox until she became a beauty editor. Surrounded by those who deem a needle to be at the mild end of a skin regimen, she now only stops just short of a scalpel.

Another friend spent a lifetime repelled by exercise until she found herself working with running fanatics. “I’m not sure if I actually bought the spiel or if I just wanted to be part of something,” she says, “but I ended up getting a personal trainer.” My own occasional nicotine habit is less addiction and more who I’m sharing a bottle of wine with on any given night.

In short, ladies, our social networks can shift our norms, beliefs and behaviour, which makes things awkward. Our egos must accept that, instead of being an original, we are a hybrid of who life lands us among: our family, our friends and our colleagues.


Relationships: Can you keep a secret?

But is that so bad? “You’re one of my funniest friends,” said one acquaintance when I asked her where I fit in. I’m fairly sure that my other friends would think she was talking about someone else. I only strive to be amusing when I’m with her because, being hilarious herself, she brings that out in me. To other friends, I am “the reliable one.” To others still, “my gin-drinking buddy.” Christakis and Fowler attribute our ability to bend to our social surroundings to a dual process of normalization and imitation.

And it’s not just the visual stuff: By mimicking outward displays, we can soak up others’ emotions. Feeling miserable? Hang out with a happy friend and see how your mood improves. Of course, it can go the other way too. (Ever notice that some people never fail to release your inner bitch?) But by understanding how we are connected and how this affects us, we can, insist Christakis and Fowler, use our social networks as a “force for good.” Learn how this works and it will help you become healthier, wealthier and more successful. For example, you may be more motivated to push for a pay raise by simply hanging out with successful, career-driven friends.

Unless you are particularly superficial or Machiavellian, it seems an odd way of looking at your friends to suggest there may be a subtext to even your closest bonds. But there has always been something strategic about friendship, since people tend to flock to the popular and the popular tend to succeed. Christakis and Fowler call it “the central premium”: Those with the most friends, who therefore find themselves in the centre of a network, will benefit most. You’ll be the first to be invited to a party— and hear the gossip. Technology has made it easier than ever to tap into this friend potential, whether it’s through Twitter or Facebook. Understanding how we are connected could be the key to controlling our lives.

So, is it time to get strategic? Last year, Amy, 30, decided to end a friendship that she had considered one of her most vital. “I suppose it was a dawning realization,” she says. “Cathy and I had been friends for years, but gradually I noticed how her negativity affected me. I didn’t like the way I talked about people when I was with her. Whatever her issues, I was letting them limit me. Once I distanced myself, I began to realize that not all men are jerks and the city isn’t a hellhole. I’m so much happier without her.” That isn’t to say that you should go around cutting off friends—research shows that any friend is more likely to make you happy than not— but understanding the effect that someone has on you may empower you to modify your own feelings.

Much of Connected: The Surprising Power of Social Networks and How They Shape Our Lives explains that it’s not just our immediate contacts who influence us. “I had a bad day at work recently; I was in a terrible mood and I didn’t know why,” explains Claire, 27. “At the end of the day, I heard my boss’ boss apologize to her for being in a bad mood, confessing that he had gotten into a car accident that day. I realized that that feeling had trickled down to me.” So, it’s not only your friends who can influence your outlook. If you want to be more efficient at work, move to a part of the office where people don’t consider Facebook breaks as valid as bathroom ones.


Are you a people pleaser?

In the name of research, I decided that I’m going to try using my friends and other acquaintances to lose weight. The argument is compelling. For example, a friend who becomes obese triples your own chances of gaining weight. Studies show that when you watch someone else eat, your brain mimics this, meaning that you’ll eat—or overeat—just like your dining-room companion. I arranged to stay with a gym-fiend friend for a week. Instead of my mindless picking, we sat down and I matched her salad for salad. It worked: Shame stopped me from raiding the kitchen cupboards.

According to the book, though, it’s not just my friend that will be my weight-loss weapon; it’s her friends too. “If you attempt to lose weight with your friends, you might succeed,” write Christakis and Fowler, “but this tiny cluster of you and your friends is surrounded by a larger group of people who are exerting pressure to gain weight.” Instead, the authors suggest inviting your friends to dinner, asking them to nominate friends and inviting them to join a running club. This creates a “social force,” which invokes a kind of social buffer of people who are improving their health around you. I stopped short of a dinner party for the Friends of the Slightly Fat, but when a friend mentioned a colleague on a diet, I suggested that we become running buddies. It was a bit awkward to begin with, but so far my new exercise partner/adopted stranger and I have been on two runs and to one Bikram yoga class. It’s a beautiful thing. The mutual friend now also wants to be part of the healthy love-in, as do another friend and her colleague.

Until something obvious like that happens, it’s difficult to tell what effect you have on your friends—or vice versa. But it’s the knowledge that you could have an impact that’s important—that what you do or say can make a difference. If snapping at your colleague or tuttutting at a commuter could ruin her day, letting go seems preferable. So, we’re not just recipients; we’re also dynamic players with as much power to influence as to be influenced. Just as your friends can change your life, you may have the power to change theirs. Use it wisely.

Relationships: On and off again