Relationships and men: Do men deal with career failure differently than women?

When a dream job ends in failure, why can't men cope with loss like women? 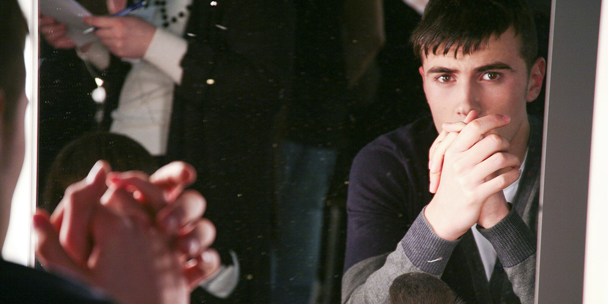 This Christmas Eve, like every Christmas Eve, I will watch It’s a Wonderful Life. As always, I will notice how unnecessarily long the first act is. I will also, as always, bawl my eyes out at the end. And, while I have cried every year since I was a kid, recently I realized that the holiday classic is one of the darkest depictions of the emotional toll that professional failure takes on men, notwithstanding the redemptive bell-ringing and angel-wing-getting.

It’s also one of the truest depictions. When men fail at work-and that’s what It’s a Wonderful Life is: a series of professional compromises, disillusionments and failures-they don’t just want to give up; they actually wish they’d never been born. Professional failure messes with men’s heads and health. I learned this, disappointingly, from first-hand experience.

What the movie doesn’t mention explicitly is that professional failure hits men a lot harder than it does women-even today. According to a recent study from McGill University, there is a causal relationship between unemployment and early death in both genders (regardless of pre-existing health conditions and quality of health care), but the link is almost twice as strong for men. Unemployment-especially when it occurs early or mid-career-increases the risk of premature mortality by 78 percent among men and 37 percent among women. Call it the only "advantage" of the institutional sexism that persists in the workplace: Men might get paid more, but they’ll also die sooner if they lose their jobs.

I didn’t exactly lose my job-not at first, anyway. After I finished journalism school in Toronto, I got a job in Edmonton writing about the oil industry. It wasn’t a dream job, but I was proud that I had found work despite the economy. Then, six months later, in an audacious fit of romance, I quit my job and moved back to Toronto to be with my sweetheart; I figured that I’d be able to find work in no time.

Dealing with the pain of unemployment on the next page…

For the next nine months, the pain of unemployment was compounded by small, sharp professional failures that still sting a year later. Unable to find a full-time job in journalism, I got a job as a waiter. I used to wait tables as a summer job while I was in school-it was something I was good at. But it felt like an unforgivable step back, and I think my new employer picked up on my disappointment. I was let go-fired-after a month.

But then I got a great gig writing a column at a respected magazine. The editor of the magazine seemed to like me-this was a very big deal! It didn’t pay a lot, but it was the kind of regular thing that would lead to bigger opportunities. "You know that witty little feature in such-and-such magazine? I write that," I would say.

But I was never able to hit the right balance of information and tone. After six months of drafts flying back and forth and six failed attempts covered in aggressive edits, the handling editor who worked directly with me decided, understandably, to go with another writer.

Being fired from the serving job? Sure, that stung, but it was easy to justify-I hated it anyway. But getting let go from that column was humiliating. It crushed me because there was no room for positivity or pride to step in and cushion the blow. I lost that job because I had failed. Each month had been a series of small failures foreshadowing the larger truth: I wasn’t as good as I pretended to be.

I used to live right across the street from the building where that magazine was put together. I would be reminded of my failure every time I looked out the window-literally. And that editor-the one who seemed to like me? I haven’t heard from her since. Fool her once, shame on me.

Dealing with failure on the next page…

I realized that no one talks about failing while they are failing. It’s as if the only time people can admit defeat is when they are back on top and it fits into a tidy narrative. But that’s not how unemployment feels when it’s happening: It doesn’t feel like a first act; it feels like everything.

And so, let me say that, while I have a job now, that failure did nothing but fill me with regret and self-loathing, and it continues to do nothing but wallop me across the heart and punish me when I start feeling confident. If I’m being totally honest, I probably deserved to get replaced at the magazine, but the experience didn’t make me stronger-even now. When I think about it, it makes my toes curl and my forehead sweat, like reliving a joke that bombed.

During the dark period in my life, I became more and more like George Bailey, and I couldn’t see any way out.

My wife and I recently talked about that time because I was curious to see how she felt about it. "It was bad," she recalled. "You were sure that you’d never get another job." Yes, I remember that-it was a feeling that went beyond self-doubt. I had "lost faith, utterly and completely, in my employability"-or so my journal from that time says.

My wife says that it was during those dark times, when I was resigned to hopelessness, that my unemployment was hardest for her. She is always an optimist, so it was difficult for her that I seemed to ignore all the positive things in my life. I had been told that I was talented by some pretty important people. I had a hugely supportive family. And, mostly, I had her. Shouldn’t that have been enough to get me through not having a job?

Understanding the male brain on the next page…

It turns out that my thinking was almost exactly how any man would think. "Despite the advent of modern civilization, human brains and bodies are essentially identical to those of our ancestors living 200,000 years ago," says Dr. Jason Schiffman of the UCLA Anxiety Disorders Program. "What this means is that, even though we now live in a time when men’s survival no longer depends on their position in a dominance hierarchy, men’s brains are still operating like they always have done." And so, while we no longer beat our chests and wrestle with other males-unless, of course, that’s your job-we gauge our place in this unspoken hierarchy by our careers.

"That’s why being demoted or fired feels so bad: It is the modern equivalent of moving down the dominance hierarchy," explains Schiffman. "And, for men in particular, it can evoke very powerful emotions."

A job tells men not only where they fit in but also who they are. "It goes to the heart of their identity, purpose and well-being," says Dr. David Reiss, a psychiatrist in Rancho Sante Fe, Calif., who specializes in workplace dynamics. "With nothing to replace that missing part of the perceived ‘self,’ it can lead to depression. For some men, the sense of humiliation with the loss of identity and masculinity can lead to true despair-even to the point of suicidality."

This defeatist mindset can also lead men to live more dangerously. Some turn to substances to regain a sense of control, while others stop taking care of themselves in other ways by no longer exercising, eating poorly or engaging in reckless sexual behaviour. Eran Shor, a McGill University researcher, says that it’s these side effects of unemployment that cause the differences in mortality. I didn’t turn to alcohol or drugs, but I was predictably male when it came to dealing with my unemployment/underemployment-and I wasn’t even, technically, a bread¬winner. I’d like to think I’m a pretty liberated man-even a bit of a sissy-yet it turns out that, when it comes to professional failure, I’m a stereotype.

Defining gender roles on the next page…

What’s worse, by my count, I was unemployed for about 30 weeks. According to Statistics Canada in 2010, men tended to remain unemployed for an average of 20.9 weeks (compared with 18.7 weeks for women). I didn’t help the men’s average. Aside from a grand social shift in the way gender roles are defined-which is happening slowly-what men can do if they are faced with unemployment is remember to stay active. I didn’t do that, unless you call checking for jobs an activity. And women, please remind your men that their masculinity isn’t in question just because they’re unemployed. While it might seem like women (who, despite what we sometimes like to think, also possess an animal brain) feel less attracted to their unemployed apes, it’s important to remember-and important for women to remind their partners-that attraction has less to do with position than it does with attributes that lead to position.

"Yes, power and social status seem to factor into women’s choice of partner," says Schiffman. "That said, women also tend to be attracted by the characteristics that make a man likely to achieve high social status, regardless of whether he has achieved it or not. Some examples of these characteristics are good social skills, humour, intelligence, assertiveness, physical fitness and height." (When I shared that with my wife, she said, "Yeah! That’s why I love you, even though you didn’t have a job.") Also, gathering up everyone in the neighbourhood to pitch in a few bucks might help too. At least it did for George Bailey. And if you’re reading this, you’re helping me too.