Relationships and infidelity: The Other Woman

If your guy has been cheating, why do you always blame the Other Woman? Could she, in fact, be your ally? 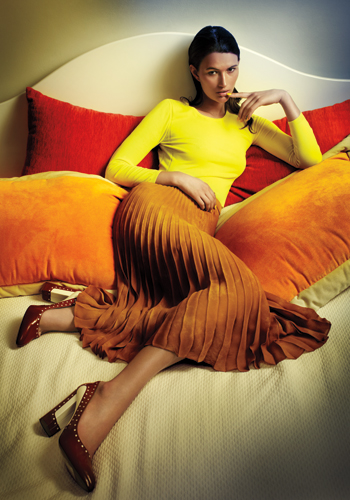 Recently I met up with a friend I made last summer. We get along very well; we are the same age, we have the same goals and we make each other laugh. We shared a couple of drinks and chatted about what we had been up to. Nothing special about that. But ours is an unusual friendship: The only reason we know each other is because our
ex was cheating on us. With each other. Why do females so often blame the other woman? Unless we unite to take revenge on him, popular culture dictates that women who have shared a boyfriend will be vile to each other. Case in point: Jennifer Aniston and Angelina Jolie. (It has been seven years, people—enough!)

Women frequently blame each other instead of the person who is actually committing the infidelity. When a male public figure is caught cheating, his partner is thrown into instant opposition with his mistress: One is a weak-willed idiot for sticking by him; the other a brazen harlot for daring to catch his eye and fall for him. When did the mindless vindictiveness begin? And why do we pursue it? Above all, it’s pointless: Unless she is our sister or best friend, it isn’t she who has broken our trust or our heart. Women have enough going on without turning on one another. We should be able to do better than this, and I was “lucky” to be afforded the opportunity.

In my case, both the Other Woman and I knew of each other’s existence—we just didn’t know he was dating both of us. When my relationship with the shared boyfriend began, I was told that she had left him months ago for someone else. Poor boy. He was charming, funny and clever. My friends and family were thrilled to see me happy. He met my parents and came to my sister’s birthday celebration, and I went to a party at his brother’s. This was no clandestine affair. Life became a happy haze of museums, cinema trips and romantic meals.

Relationships and cheating: Is monogamy dead?

Why you should consider not blaming the Other Woman (he was cheating on her too!), on the next page…

Then, during lunch with a friend one sunny Friday, I checked my phone. I started to shake when I saw a 2,000-word email from his ex. She turned out not to be his ex at all. She calmly explained that she didn’t want to hurt me but it was only fair to let me know that she had found out that he had been seeing both of us. He had been telling her that I was just a good friend and then admitted that I was a momentary indiscretion. He’d been lying to both of us over and over again.

I was shocked because it had genuinely never occurred to me that my boyfriend could be cheating on me. I had always known about this woman, but she had only ever been mentioned in the most disparaging terms. I had accepted his version of her awfulness with few questions, and for that I am ashamed. My initial reaction was to doubt the credibility of her email. How dare this spurned harpy interrupt my
new-found happiness? So I called his mother, who admitted without hesitation that it was all true—he’d been, in her words, “a very silly boy.” I felt sick, shaken and humiliated—particularly because he never denied or admitted it. In fact, having been told by his girlfriend that she was going to contact me, he seemed to accept that it would mean the end for us. I simply never heard from him again.

So, yes, I know: At this point in the breakdown of a relationship, it is all too easy to heap blame on the Other Woman. It is considerably less taxing to blame a total stranger than to look at what your own errors of judgment might have been. Pain is easier to deal with when there is a target for your rage beyond a man whom you chose to love—a man who, you now have to admit, did not love you in quite the same way. We all know how it works: “Bad” women steal men, and “weak” men are victims. Perhaps we apply much higher standards of behaviour to our own gender. Or maybe we just prefer to see men as victims? God forbid that men should have some agency over their own deeds. The sense of betrayal that I experienced on realizing the extent of the lies I had been told was intense. My sadness didn’t just come from finding myself without my ex-boyfriend; it came from the destruction of my ability to trust. Suddenly, I doubted my own judgment: I questioned the motives of all those who loved me most and disbelieved their kindest words. I was consumed with anxiety about what other mistakes I might make.

But then I was thrown a lifeline: the Other Woman. In those early, painful days, I assumed that we were polar opposites. She must be an airhead, a nag, a prude. “He can keep her,” I imagined myself spitting, “if that’s what he goes for!” At first, I thought that this would make the heartache easier. But after the initial shock faded, I was able to allow that she was not the cold-hearted creation I had been told about. She appeared from the email to be kind, funny and reasonable. She hadn’t left her boyfriend heartbroken to be with another man. I Googled her, and it made me queasy to see how similar we were. It took a few clicks of the mouse to reveal, via Facebook, that we share the same name (a letter apart), we are the same age (a few years older than him) and we do not look dissimilar. Why cheat on two girls so alike?

For weeks, my friends assumed that she had an agenda in telling me, but, rereading her email, I concluded that, no, she just wanted to warn me that I had been lied to. The conflict was not between us; it was with him.

We began an email conversation, answering each other’s questions about the times we realized he had been lying. Suddenly, things made more sense for the both of us. We let each other know that we understood we were not to blame and continued to check up on each other throughout the summer.


Find out how a meeting with the Other Woman was surprisingly helpful in overcoming heartache, on the next page…

Her kindness and support was invaluable, and I promised I would buy her a drink to thank her for warning me. When we finally met in a bar several months later, I felt overwhelmed with gratitude that I had been spared a longer relationship with him. We bought each other a cocktail and toasted the fact that we had avoided the spurned-woman stereotypes. Of course, it’s easy to feel wise once the pain has passed, just as it’s easy to lash out at the person you don’t know when you feel as if your heart has been shot to shreds. But we need to pay less heed to the idea of the Other Woman as the enemy.

We shouldn’t have to
fight over a man as if a relationship— with a proven cheater—is our only chance of happiness or stability. Every soap-opera plot, every song that reinforces the evil stereotype of the Other Woman, only ever really reinforces the idea of partners as our possessions. They are not. We are each accountable for our own behaviour. Life can be a mess, people can make mistakes and women can be more than either virgins or vixens. The sooner we realize this and behave accordingly, the sooner those who choose to stray will be held accountable for their behaviour.

As for me, I felt a burden lift from me as we chatted. The comfort of knowing that another intelligent woman had been lied to—and believed it—was immense. Before parting, I thanked her and confessed my fears about meeting her. What if she had lived up to the stereotype after all? “If you were horrible, at least it would have been something to tell my grandchildren,” I confessed. “You won’t remember him by the time you have grandchildren,” she said. “He’ll just be some guy you dated.” She was right; he already is. But I will always remember her.