How one woman's perfect pair of heels walked her through relationships until she found the perfect man. 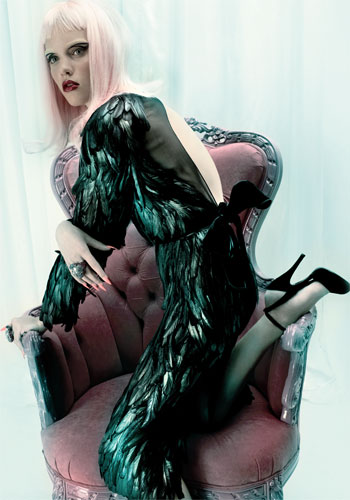 In order to meet my husband, I literally had to lower my standards. I began dating online four years ago, almost a decade after my first marriage ended.

I’d had a number of relationships and dates since my
divorce, but most – like the lawyer who showed up in a forest – green BMW reeking of patchouli – were the sad results of my poor judgment. I was coming up empty in my
search for love.

Part of the problem might have been the 60-hour workweeks I was putting in as a magazine editor, but I wasn’t giving up. So I took a deep breath and delved into the anonymous world of Internet dating.

My first challenge was to write my profile. I described myself as a "career woman" who "loves horses and dogs" (to show my soft side) and loves to wear "fun and stylish high-heeled boots" (to show that I wasn’t uptight). I wanted men to know that I could be girlie and fun.

I also visualized myself attracting more men if I could describe myself in an alluring way – I hoped those who might find me intimidating would now be drawn in by my well-heeled sexual innuendo. Then I moved on to the fun part: creating my wish list for a mate.

After carefully vetting the attributes that were listed on the site, I chose "smart," "humorous," "confident," "generous" – and "tall." I admit that that last one is totally superficial.

But since I’m a five-foot-9-1/2- inch-tall woman, my mandate with relationships had always been to find someone with whom I could wear the aforementioned high-heeled boots. When I first went to Paris in my mid-20s, I spent all my money on a pair of black mid-calf Costume National boots with two-inch heels.

I wore them with black cords as I walked down the Champs-Élysées. I was hooked. Boots work with my personality – I’m drawn to them because they are dramatic and fashionable.

Though I didn’t spell out that I was a "midheight-heel girl" in my profile, I was still hoping that the right message was being communicated. Finally satisfied, I hit "send" and got in a virtual lineup behind every other woman out there who was looking for the same man.

Over the next few weeks, the site regularly matched me with men. Of the selection, I chose to date four men, all of whom looked professionally casual in their button-down shirts and all of whom were over six feet tall. Yet, after miserable dates with three of them and being stood up by the fourth, I reconsidered my wish list.

Despite the fact that all of my dates met my height requirements, none of them met any of the other required characteristics. Fortunately, the site allowed me to make changes – I swapped "tall" for "loyal."

A few weeks later, I got an email from a guy whose profile photo was unlike any I had seen so far. Wearing a straw fedora and a slightly wilted white linen suit, he looked like a young F. Scott Fitzgerald. He had a mischievous smile, and I finally understood what it means to describe someone as having "twinkly" dark eyes. I was even more captivated by his profile.

His use of language and wordplay drew me in, and by the time I read about his great love for his two daughters, I was entranced. The only downside was that he was a mere five feet 8-1/2 inches.

I threw caution to the wind and we set a date. Feeling a little insecure, I made a silly joke in our pre-date emails about possibly trying a new hair colour. I was surprised by his reassuring yet quirky answer: "If you insist on changing your hair colour, may I ask that you still wear your high-heeled boots as advertised as I am definitely subject to the usual male weaknesses."

My profile bio did the trick! But the day before we met, I began to panic. My dating uniform had always included a pair of black suede Sigerson Morrison high-heeled boots, and despite his alleged wish for me to wear something like these, I could not imagine what it would be like to be taller than my date.

Worse, my closet was bereft of flats, with the exception of a pair of well-worn riding boots. So I made a quick trip to Holt Renfrew’s decadent shoe department for a sensible pair of black Tory Burch flats. They seemed innocuous enough for a first date with a short man – I would just pair them with lace stockings to generate that certain je ne sais quoi.

He came to pick me up for our date, and he was even more attractive in person. He had an adorable lopsided grin and wore a rumpled professorial tweed sports jacket and well-faded jeans. I put on my Tory Burch shoes and we left. As I didn’t get that same frisson I used to get when I pulled on my boots in front of my date, I was worried that I wouldn’t radiate any sex appeal.

Despite the height difference, that first date – and every one that followed – was fabulous. My collection of flats grew accordingly. I wore heels to work and for social occasions but made the switch to flats when I met up with my man. As my confidence grew, I realized that what heels I wore were not what made me attractive to him. It became increasingly clear that he simply wanted to be with me.

Who is this mystery man? Learn more about this budding relationship and how footwear helped it on the next page…

But the story doesn’t end there: One day, I caught him eyeing the high heels in my closet, and I suddenly felt that frisson again. Before I knew it, we were both transfixed by the thought of me in heels, and soon I was pulling on my boots when we went out together.

Even better, he asked if he could take me shopping for high heels. He led me to the same Holt Renfrew shoe floor that I knew and loved. Now comfortable and confident, I let him take the lead, and before I knew it, shopping with him was fun – and hot.

The look in his eyes when I tried on black buttery-soft leather Prada OTKBs with three-inch heels told all. He ended up buying them for me. I towered over him as we walked out of the store together – and he was beaming. When I got home, I immediately put my favourite grey suede Gucci pumps and my never-fail gold buckle black satin Fendi wedges back into my wardrobe rotation.

I was surprised with the results. Before I met my guy, I’d never really been on the same emotional level with a man I was dating. He is stubborn, arrogant and difficult; he’s also loving, loyal, affectionate and kind. He says the same things about me. The high heels were merely a catalyst for us to get together – and for me to get past my insecurities. In fact, as my confidence grew, so did the height of my heels.

From time to time, I strap on dizzyingly high shoes, like my new diamanté gold Gucci sandals. We are now happily married. Sometimes I’ll find a pair of open-toed indigo patent-leather Prada cork wedges at the end of our bed, or I’ll discover red satin and velvet Roger Vivier high-heeled sandals in a suitcase when we’re away for the weekend. The last time we travelled, my husband presented me with a pair of zip-up black suede Prada boots when we were walking down the street.

He insisted I put them on right then and there. Of course, as an independent woman, I can’t let him choose all my footwear. This Christmas, I know he will notice that on the computer in his study I’ve bookmarked the Acnestudios.com page that features black cut-out ankle boots with just over a five-inch heel. These will be my tallest heels yet. They combine all my favourite shoe-design elements: lace, cut-outs and, of course, a dramatic spike heel.

But even if he doesn’t buy them for me, I’ll buy them myself. We both know that our differences, no matter what they are, don’t stop either of us from looking up to each other – even if, on a daily basis, he’s the one physically looking up at me.