Panty trade: women who sell their underwear to men. Seriously.

Tabatha Southey reveals how she priced herself out of the knickers market. 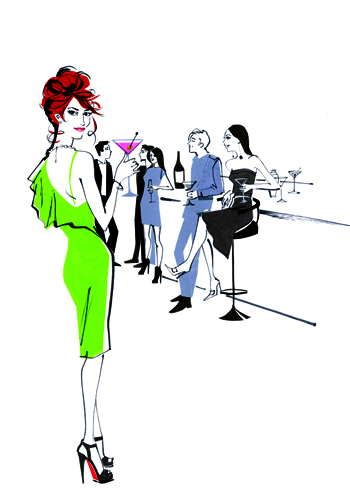 A day doesn’t go by that I don’t check the Missed Connections page on Craigslist. It’s not that I expect to be mentioned there; it just pleases me when someone references a location that I know. Something like “Saturday night, tall black girl, mauve skirt, buying a hot dog, Bathurst and Queen” makes my heart skip a beat. You see, my friend has a studio at Bathurst and Queen. I know Bathurst and Queen well. So, consequently, when I—a short white girl who dislikes the colour mauve and probably looks a lot more like the guy selling the hot dog than the girl buying the hot dog—read that posting, I feel included. I feel plugged in. Bathurst and Queen, I smile to myself. Yes, indeed, this is my town.

“I bought your panties at The Bovine, Saturday 2 a.m., and I want to buy more.” There’s a lot of panty buying going on around the city that I knew nothing about. There’s some acknowledgement of panty commerce posted on Craigslist every day. Downtown Toronto on a weekend is like some sort of undies farmers’ market apparently.

“You sold me your panties. Broken Social Scene. Let’s meet up!”

“I sold you my PANTIES!!! After-hours club on Britain Street. I have more.”

“That’s good,” I think when I read a posting like that. She has more. Sensible girl.

If it weren’t for Craigslist, I’d be completely uninformed about all this underwear-related commerce because I’m just not part of it. It’s unlikely that I’d ever sell my underwear to a man, no matter how sweetly he asked me, and it’s not because I’m prudish or anything—it’s just a matter of economics. My underwear is expensive, so if a man wanted to buy my underwear, I’d probably have to charge him $80 minimum just to break even. Also, most of the time my panties match my bra, and, frankly, I’d prefer not to break up a set—I might never find the right colour match again! And in my arguably decadent underwear world, if a pair of strawberry-pink panties gets taken out of commission, a strawberry-pink bra is immediately rendered useless. I just make it into two doilies.

Did Tabatha Southey get into the knicker’s market?

Obviously, I’d have to upsell the panty buyer big time. I’d have to sell him my panties and my bra, and that means (I’m pretty good at sales) that some innocent panty speculator could easily end up spending hundreds of dollars—even if I didn’t do any kind of markup for added value. Also, the sky’s the limit if I’m wearing a bustier or corset—that can easily cost $500 and either way, bra or corset, he’ll need more cash than he’s probably carrying. I imagine that the light flirtatiousness or sheer perversion of any panty-purchase moment would be entirely lost if we had to trek off to the bank machine together, wait in line and stand there in the little marble bank foyer while he counted the cash and took his little paper bank slip.

“Don’t forget your bank card,” I’d say. God, I just know I’d say that. I would say “Don’t forget your bank card” out of an instinctive concern for the man who had either just put a bid on my panties or with whom I’d just negotiated a slightly drunken verbal contract (okay, so maybe I’d get something in writing), stipulating that, upon payment of the agreed-upon sum, he would take possession of my panties, to which I would revoke all rights, in perpetuity, including but not limited to use in all media.

Initial here, please. I’d get it notarized by the bouncer. The fine print would have to say that I granted the purchaser no additional access, without reasonable notice, and at least a nice dinner.

Not a sexy thing to say. Some nice man in the grips of the true spirit of Saturday night ponies up $500 for some as-yet-unseen lingerie and I, in the true spirit of Monday morning, practically tidy up his wallet and remind him to ask for his T4 at work. A deal breaker, for sure, ladies. No man wants to buy panties from his mother—or if he does, he’s posting on another site.

So I can’t commodify my undergarments. I’ve priced myself right out of the knickers-flipping market. It’s a lifestyle choice I’ve made—I always wear pricey panties. It might still happen, of course: the club or concert panty purchase. I’m not exactly saying no; I’m just going to have to be honest about it and tell the boys upfront: “You can walk on by or you can stick around and negotiate hard.” But, trust me, it’s going to be different—way more costly and a touch officious: “I’ll rock your world like a student loan officer, baby. That much, I promise.”