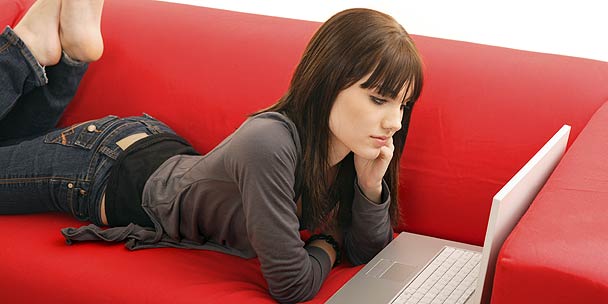 Q: I am at my wits’ end. I met a man on the Internet, and within a very short time we were married. Several months later, I was expecting twins. My husband seemed thrilled at first, but before our babies were born he told me that he was leaving. He walked away and never looked back. I was heart­broken, but my family got me through the ordeal. Within months of our separation, he filed divorce papers. As you can imagine, I was totally in a daze. Unfortunately, I am still totally dependent on him for money. I hate being in this vulnerable situation, but I don’t know what to do. In the past month, he has come back into my life. He admits that he made a huge mistake and now wants us to get back together again. He says he misses his family and desperately wants a second chance. We have gone on a few dates, but the other day, while he was on a business trip, I found pictures on his computer of him and another man and woman. I haven’t brought it up because I’m wondering if I should just run like the wind. — Spinning

Dear Spinning: I am sorry for the plight you find yourself in with this man. I feel his name begins with “To” — perhaps it’s Tony or Tommy. He has been very successful in his business life, but his personal life was lacking. When he met you, I think he felt that it was time for him to marry and have a family. There are many things that concern me about your situation, but one thing that really stands out is that he seems to lack any capacity for empathy. It’s like he’s a robot or an automaton. I read your letter several times, and on each occasion I could see the two of you having dinner, but there was nothing but silence and, in your case, sadness. I am sorry to say this, but he doesn’t love you — in fact, he has never loved you. He was just drawn to the idea of having a family because it conveyed to the world that his life was perfect. He has a very clinical and detached view of the situation. He has been cruel to you, but he doesn’t have the emotional capacity to even recognize it. In his mind, you have what you wanted: a marriage and children and a man who would foot the bill. I also have to question his sexuality. I’m not sure that he’s straight. His sexual persuasion seems more fluid. I suspect that he’s up for whatever is offered. So, I think you should run like the wind! If you get back into this relationship, you’re in for years of unhappiness and emptiness. I don’t think my advice comes as a surprise to you; it just confirms how you’re feeling inside. I see you making a new life for yourself. One day you will remarry and have one more child. Soon there will be someone named Michael in your life, and he’ll introduce you to a person who opens doors for you both personally and emotionally. The very best of life awaits you, so trust your instincts on this one and run!